It’s one of thousands of local criminal cases that went nowhere, and some law enforcement leaders are livid. 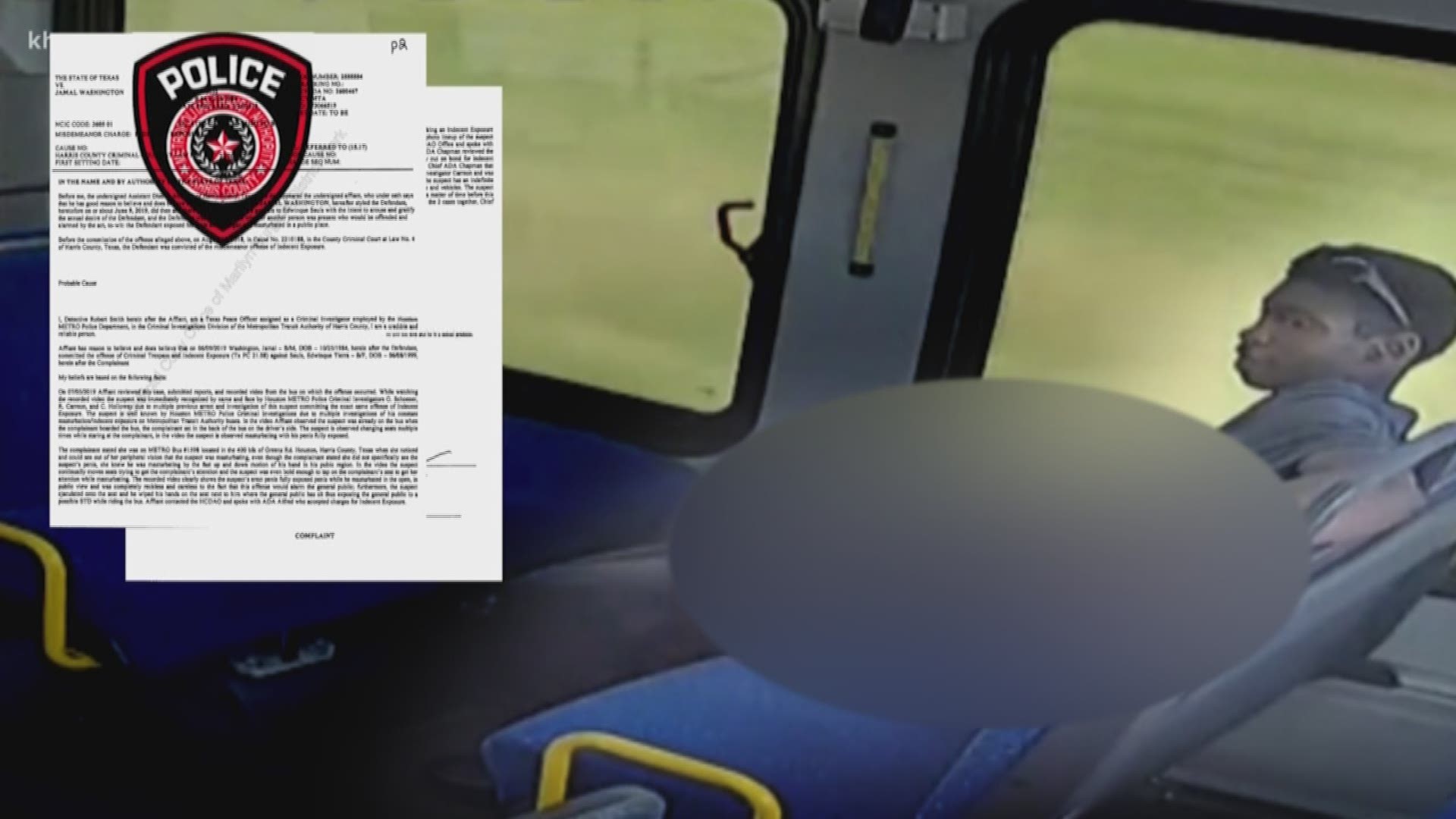 Washington was arrested by METRO police officers and charged with indecent exposure. In charging documents, Detective Robert Smith warned that the suspect posed a real danger to women.

“He will not stop. And he is a sexual predator. It’s just a matter of time before he attacks and rapes a female victim,” Smith wrote.

But despite the bus surveillance video clearly showing what happened, the case went nowhere in court. Harris County Judge Andrew Wright ruled there was no probable cause for the arrest because the female passenger who made the complaint never actually saw Washington’s penis. Police said she only noticed the fast up and down motion of Washington’s hand out of the corner of her eye.

“Therefore, they didn't have probable cause because they were missing an element of the exposure of that gentleman to the bus passenger,” Wright said.

Whether the judge’s decision is considered a technicality or not, the number of no probable cause rulings, also known as no PC, has more than doubled in the past five years.

The biggest year-to-year jump was also in 2019 when a slate of Democratic judges took over the bench.

“Every one of these decisions is being made by our local magistrates and judiciary and should be of critical concern in terms of just how far our limited resources can be stretched as we strive together to keep Harris County safe,” Ogg wrote.

Ogg offered possible reasons in her letter for the surge in no probable cause rulings. In some cases, the summary of facts provided by law enforcement did not contain enough detail or sufficiency for each element of the crime filed. In other cases, Ogg said judges and magistrates who had “increasingly vocal, personal perspectives” about crime were to blame.

“The majority of time, I believe it's activist judges that are putting their own views in terms of justice, and it’s more centered on coddling criminals,” Acevedo said. “It’s something that is a growing problem, it’s a growing challenge.”

One HPD case of particular concern was a theft in progress call last November at a CVS drug store in southwest Houston. According to prosecutors, offices found Christopher Obryant walking down a nearby street and told him to stop. Obryant allegedly dropped what he had in his hands and said “f*** no, I’m not going back to jail” before officers managed to arrest him. They took him back to the CVS where store security video showed him shoplifting. The Harris County District Attorney’s Office accepted charges of theft, second offense.

But at a hearing hours later, Magistrate Courtney St. Julian rejected the case.

“He had $12 worth of food and held at gunpoint. I’m feeling the Thanksgiving spirit, so I’m going to find no probable cause for Mr. Obryant’s arrest,” St. Julian said. “Happy holidays.”

Credit: KHOU
Magistrate Courtney St. Julian dismissed a criminal theft case because she found no probable cause because she was feeling the "Thanksgiving spirit."

In an email to KHOU 11 Investigates, St. Julian never addressed her “Thanksgiving spirit” comment but said that judicial officers are independent bodies responsible for interpreting the law.

“Judicial officers are granted wide discretion to decide if there are enough facts for each element of a charge in determining the existence of probable cause,” she said in the email.

The magistrate said the charge of theft as a second offender requires specific information, such as the date and county of the defendant’s prior theft conviction. Without that, she said there is no probable cause for the arrest.

Other crimes ruled no probable cause

It’s not just petty theft cases that are getting no probable cause rulings.

At the Harris County Precinct 4 Constable’s Office last October, Omar Truillo was charged with his second felony evading arrest case in as many months.

According to the arrest report, deputies tried to pull Truillo over for not having a front license plate. Dashboard camera video from a deputy constable’s patrol car showed Truillo didn’t stop until he pulled in the driveway of his home.

Magistrate Jennifer Gaut ruled there was no probable cause because there was no indication Truillo was speeding or putting other people at risk.

“The state may disagree with me,” Gaut said at a court hearing.

Precinct 4 Constable Mark Herman is livid about the pattern of no probable cause rulings.

“In my 34 years of being in law enforcement, I have never seen so many suspected criminals on our streets because of the position taken by certain judges,” Herman said in a written statement.

Credit: KHOU
Harris County Judge Darrell Jordan, who oversees the county's 16 misdemeanor courts, said the district attorney's office can always refile a case after a judge rejects it for no probable cause.

Darrell Jordan, the presiding judge over Harris County’s 16 misdemeanor courts, said each judge has their own way of doing things and each has their own thought process.

“I believe that we’re following the law the best we can, and no one is perfect,” Jordan said, adding that a no probable cause ruling does not mean the case goes away for good. “The buck doesn't stop with the judge; it’s really the DA who carries the water. They can go back and find the errors in the case, they can refile it, and they could come right back before the judge or they can go around the judge and simply take the case to a grand jury.”

In her letter to area police chiefs, District Attorney Ogg said those decisions would have to be evaluated on a case-by-case basis.

“Together our agencies will have to determine whether the resources required for your officers and our attorneys to refile the same case a second time are worth the expense and effort,” Ogg wrote.

RESPONSE TO NO PROBABLE CAUSE RULINGS

"In my 34 years of being in law enforcement, I have never seen so many suspected criminals on our streets because of the position taken by certain judges.

Currently on all cases the judges dismiss charges because of no probable cause we are notified by the District Attorney. Our office then takes the time to research and refile many of these cases. This is a new norm we as a law enforcement agency have become accustom to."

"The METRO Police Department is committed to working with the Harris County District Attorney’s Office.

We are aware that in some instances cases are dismissed and there are many factors involved in the disposition of prosecuting cases.

Those challenges do not, however, have any bearing on MPD’s dedication to work each day to provide a safe and secure system for transit users."

“Public safety is our top priority. People who have demonstrated that they are a clear threat to our community belong in jail and should be held accountable if they are convicted of a crime. Law enforcement, prosecutors, and judges each play a critical role in providing justice for victims through our criminal justice system. For our system to work properly, it’s incumbent upon law enforcement and prosecutors to present judges with compelling evidence that criminal charges are justified in every case we bring forward. To that end, the Harris County Sheriff’s Office is committed to continue working with the Harris County District Attorney’s Office to ensure that judges consistently receive all the evidence and documentation they need to make decisions in our community’s best interest.”

"Judicial officers are independent bodies responsible for interpreting the law. Judicial Officers are granted wide discretion to decide if there are enough facts for each element of a charge in determining the existence of probable cause. As a Hearing Officer, my determination is made solely upon the information received from the prosecutor during probable cause court. Changes to prosecutorial staff at intake has resulted in an increase to the number of no probable cause findings. The staff change created an increase in cases filed without essential “element” information. The law requires a determination on probable cause be based on the elements of the charge. As judicial officers, we cannot rubberstamp the further detention of an individual when the facts do (not) support a probable cause finding. One element that is required in every case is the Defendant must be identified as the perpetrator. For a specific charge of theft as a second offender, the District Attorney must provide specific information regarding the Defendant’s prior theft conviction, like the date and county where the conviction occurred. Absent these elements, there is no probable cause for the arrest."