Luxury charter buses are costing the Houston Independent School District millions to bus students to and from school at a time when the district faces a $115 million budget deficit. 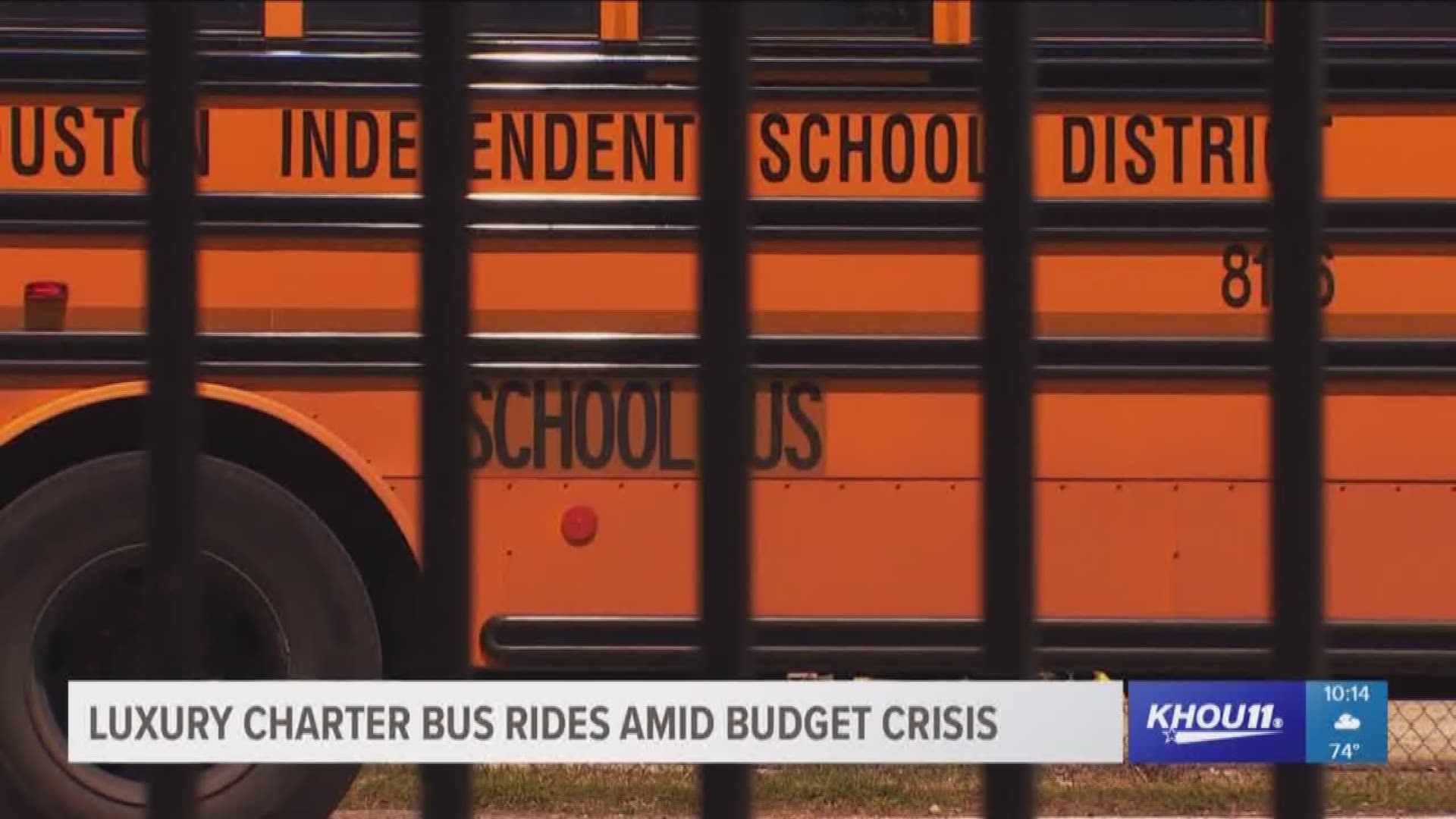 Luxury charter buses are usually rented for a casino trip or private tours, but KHOU 11 Investigates found dozens of expensive buses hitting the streets every day for another purpose.

That fancy fleet is costing the Houston Independent School District millions to bus public school students to and from school. The spending comes while the district is laying off teachers to cover a $115 million deficit.

“Why should we have to pay all this money for our kids to get to school?” parent Jasmine Taylor said. “They have to do better, because that’s too much money.”

Taylor was among the parents dropping off their kids at Hillard Elementary School, where they board charter buses to be transported to another school.

The cost of the luxury buses, outfitted with plush seats and TVs that parents said they get to watch on their way to school, surprised some parents.

“I think it’s too fancy for the kids, just to go to one school to another,” parent Rickita Briones said.

The average cost per route for a regular HISD school bus is about $234 a day, according to a KHOU analysis of Texas Education Agency data.

Credit: KHOU
KHOU 11 Investigates found that private charter buses are costing taxpayers nearly five times as much as the cost of using a district bus.

“It’s not worth it. You could be giving that money to those yellow school bus drivers and those teachers,” Taylor said. “You know what, what happened to all the yellow school buses? … Can somebody answer that question, cause that’s a good question.”

Those yellow school buses could be found across town at HISD’s bus barn. Every morning, scores of yellow buses sit empty, because of a massive bus driver shortage.

What doesn’t make sense, Thomas said, is hiring expensive charters when her own people are underpaid.

Instead, the district is on pace to spend $8 million on fancy charter buses this year.

The district rolled into the school year 50 bus drivers short. Then, Hurricane Harvey hit and it lost another 100. The biggest hit came when talks of massive budget cuts drove away another 130.

“Right now, honestly, when you have 280-plus vacancies in that department, you have to come up with alternative ways to get students to school,” Busby said.

About a third of the routes charter buses cover are temporary routes to bus students from schools damaged during Hurricane Harvey to temporary schools, according to Busby.

Parents dropping off their children at the closed Hilliard Elementary fall into that category. Their kids were on their way to a temporary school.

“It’s still too much money coming out of pocket when we’re still struggling, recovering from Harvey,” parent Taylor said.

The district hopes to recover some of those costs through insurance and FEMA claims, Busby said.

But two-thirds of the charter bus routes cover existing bus routes, like Anaya Parker’s route to a magnet program at Westside High School.

“I’m wondering, ‘Where is this money coming from? I thought HISD had a budget shortfall?’” Anaya’s mother Kelly Parker said.

Anaya’s yellow school bus was replaced with a charter bus earlier this school year. At first, she thought the fancy transportation was a limousine.

“What I pictured in my head was a stretch limo, which scared me ‘cause I’m like, ‘Who’s in the limo picking up kids,’” Parker said.

After getting over the initial shock, she said the charter bus was late several times and broke down one day. It took two hours to get a replacement.

“She missed a lot of biology and she has biology STARR this year, so that’s very frustrating,” Parker said.

Credit: KHOU
Anaya Parker&rsquo;s journey to school each morning begins at 5:30 and includes three different modes of transportation: a car drive, a train ride and a ride on a bus.

She had enough and now her daughter wakes up at 5:30 a.m. to start her morning routine. Her commute requires three modes of transportation – a car drive to the METRORail, where she catches a train and then transfers to a bus to get to class on time at 7:55 a.m.

Then there’s the safety issue. Charter buses don’t have flashing lights or stop arms to warn other drivers to be cautious like a school bus does.

“Cars don’t stop, they’re not looking cautiously for kids crossing the street,” Parker said. “That alarms me as well because the kids aren’t safe getting on and off those buses.”

Busby said when it comes to charter buses, it’s not the new normal and “what we’re doing right now is to resolve this issue.”

“If you’re outside looking in, this makes no sense, but if you’re inside dealing with the issue … then you’re doing the best you can do given the circumstances,” Busby said.

But, Busby admitted, it may not resolve the issue by the time next school year rolls around.

More information on becoming an HISD driver can be found by clicking here.

The following job fairs will be held from 9 a.m. to 1 p.m.: May 12 at Scarborough High School; May 19 at Hexsar T. Holliday Food Services Support Center; June 2 at Westbury High School; June 9 at Gregg Elementary School.