Ivan Robles Navejas was out on bond for a 2018 incident in which he's alleged to have hit someone with a truck and bit off part of his ear, records show. 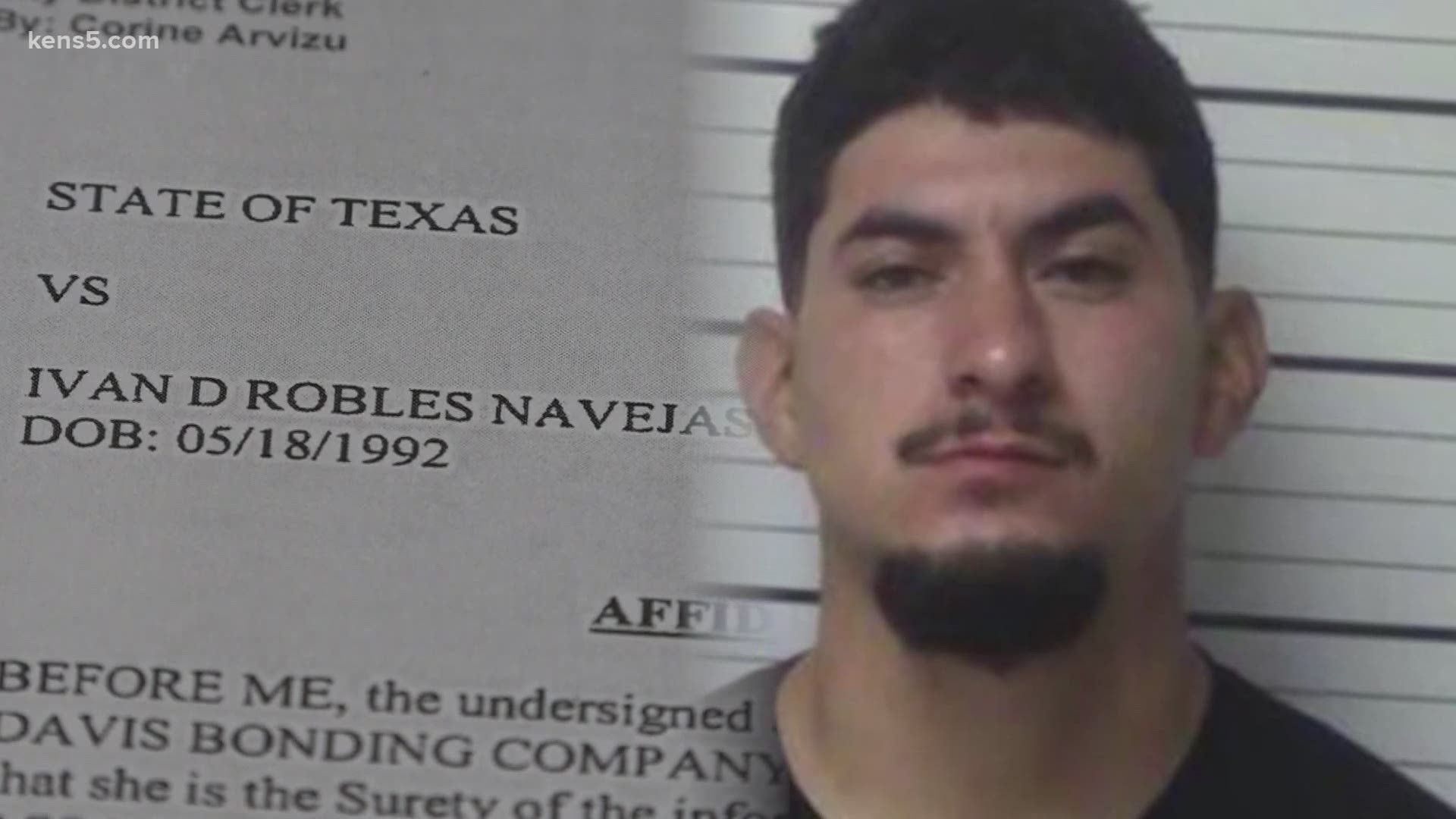 KERR COUNTY, Texas — A man suspected of killing three members of the Thin Blue Line motorcycle club in a drunken driving crash Saturday was living in the country illegally and had been arrested three times prior to the deadly crash, records obtained by KENS 5's Eyewitness Wants to Know team revealed.

Ivan Robles Navejas, 28, is suspected of causing a crash that claimed the lives of three motorcyclists and injured several others.

U.S. Immigration and Customs Enforcement said in a statement on Tuesday the agency's Enforcement and Removal Operations officers "lodged an immigration detainer with the Kerr County Jail," noting that Navejas is "an unlawfully present Mexican national."

Records revealed that at the moment of the crash, Navejas was awaiting trial on a 2018 felony aggravated assault charge in which he is alleged to have hit someone with a truck before biting off part of the man's left ear. A warrant for the incident states Navejas hit a man with a Ford Ranger, pinning the man between the truck and another vehicle. After hitting the man with the car, Navejas is alleged to have bitten a portion of the man's left ear off and biting his back, the warrant states. Records show Navejas posted a $65,000 bond in connection with his 2018 arrest and was awaiting trial.

Court documents note that Navejas' attorney had asked in May that the individual whom Navejas is alleged to have assaulted not be called a victim during the trial and that images of the victim after the assault not be left for the jury to view for extended periods of time during the trial.

“Agency records indicate that Ivan Robles-Navejas was not subject to removal when arrested by Bexar County in 2018 due to his conditional permanent resident status. As a result, ICE did not lodge a detainer on him at that time,” ICE said in a statement sent Wednesday.

Prior to that, Navejas was arrested in Nov. 2016 by the Texas Department of Public Safety on a charge of driving while intoxicated. An employee with the Kerr County Clerk's Office said Tuesday it appeared the Kerr County District Attorney's Office declined to prosecute the case, though no documentation was available through the county clerk's office that elaborated on the decision to not prosecute.

A spokesperson for ICE said that while they encountered Navejas at the Kerr County Jail after his Nov. 2016 arrest, he did not meet the agency’s enforcement priorities at that time.

Prior to the 2016 arrest, Navejas, online Bexar court records show, had been arrested in 2013 and convicted in 2015 of evading arrest. An employee of the Bexar County Jail's records division confirmed via phone Tuesday that there was no record of an ICE detainer in Navejas' 2013 arrest.

A spokeswoman for ICE clarified Wednesday that Navejas was a recipient of Deferred Action for Childhood Arrivals from 2013 to 2015, and after that had conditional permanent resident status, which expired in January 2019.

Kerr County Sheriff Rusty Hierholzer said Saturday motorcyclists were riding in a group along Highway 16 between Kerrville and Medina around 12:10 pm. The sheriff said Navejas crossed lanes and ran into the group. The Thin Blue Line Motorcycle Club identified those killed as Joseph Paglia, the president of the club's Chicago chapter; Jerry Wayne Harbour, a retired officer with the Niles Police Department, a Thin Blue Line Ambassador and a retired Lt. Col. with the Army; and Michael White, an Army veteran, secretary of the group's Chicago chapter and a Chicago community services officer.

RELATED: Man tells deputies his grandmother was killed in a drive-by shooting, now he's charged with her murder