The wound Essie Jacobs suffered was the kind of the injury that a routine state health inspection should have flagged. 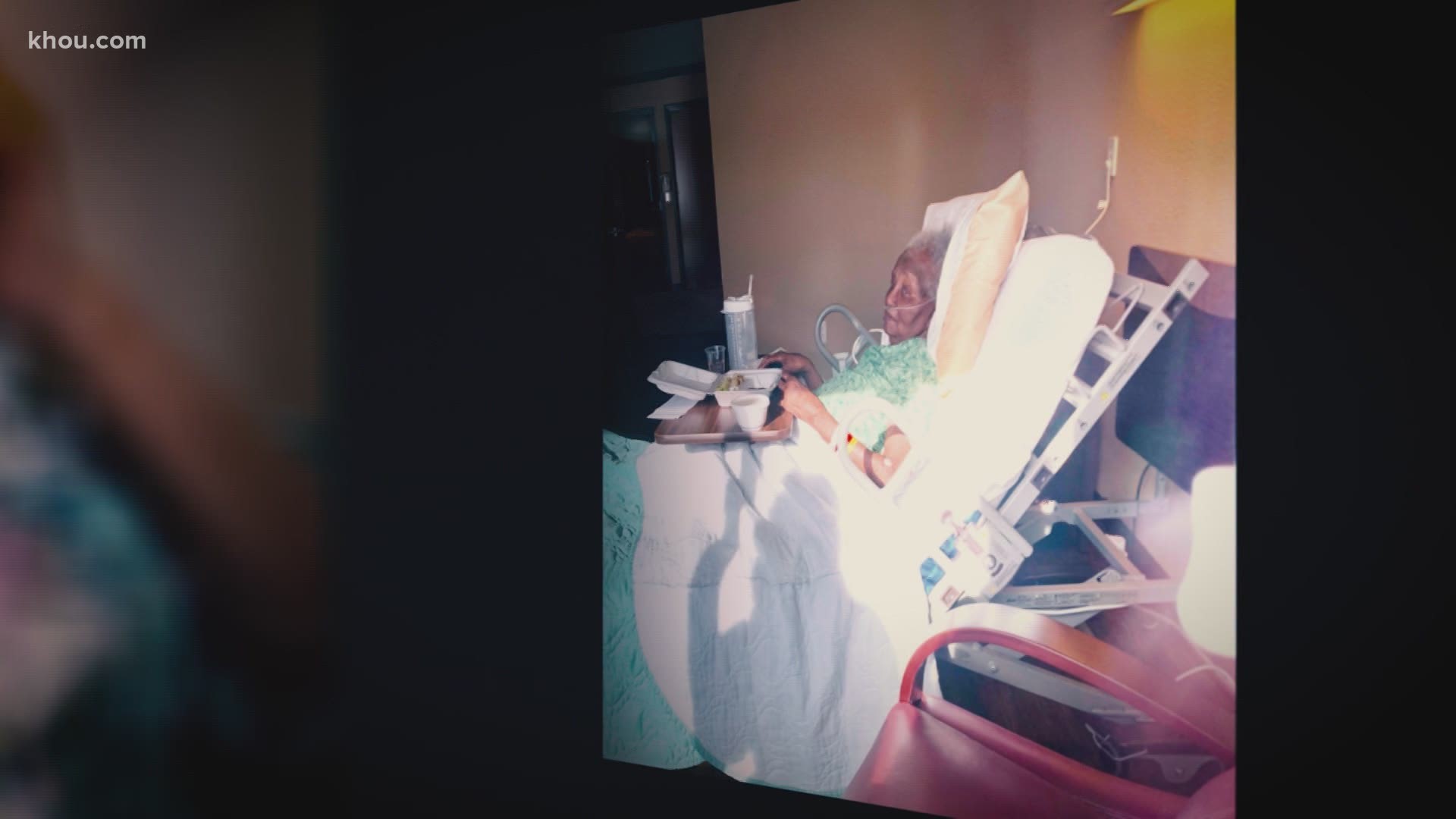 HOUSTON — Chasity Cabell and Melanie Jones scooted close together to stay in the camera’s frame and then dialed their grandmother up on FaceTime, not knowing exactly what state they would find her on the other end.

“We’re praying for you. Are you praying?” they asked.

A soft, fragile “yeah” was the reply from Essie Jacobs.

The bedridden 89-year-old’s condition had rapidly deteriorated and she was now in hospice. Their conversation was mostly one-sided — cheery well-wishes from the grandchildren and one-word inaudible grunts from the shell of the woman they once knew.

“She is suffering. You don’t want your loved one to suffer,” Cabell said.

In June, Jacobs fad fallen ill with fever and low blood oxygen levels. They were telltale signs of coronavirus, and a subsequent test confirmed she was positive. Doctors sent her to the Medical Resort at Pearland, one of a handful of long-term care facilities in the Houston-area that was accepting COVID-19-positive patients.

“Just the name ‘resort’ alone, I was like ,‘OK, she’s going to be fine. They’re going to take care of her,'” Jones said.

But no outside visitors were allowed because of the pandemic. For three months, the family had no way of checking her condition in person and could only view grandma through the window of her nursing home room.

“So I'm like, ‘OK, you know, this is not good,’” Cabell said. “But Grandma kept on fighting. She made it through the COVID.”

But Jacobs would not make it through a massive bedsore on her backside, a wound so deep the family believes it had been ignored for weeks.

Worse, the family said they had no idea about the bedsore because the Medical Resort at Pearland never said a word about it until the day Jacobs had to be hospitalized. Three weeks later, Jacobs died.

The wound Jacobs suffered was the kind of the injury that a routine state health inspection should have flagged. But just as COVID-19 canceled family visits for months, the pandemic also put those types of inspections on hold. The lack of oversight and accountability has had troubling consequences across Texas, according to the non-profit advocacy group Families for Better Care.

“We’re getting word from families who are just now starting to get back into their loved ones’ nursing home or assisted living facility, and people look like a shell of their former selves,” said executive director Brian Lee. “It’s been a real problem. The pandemic has really been a nightmare."

The Medical Resort of Pearland did not return repeated phone calls, emails and a certified letter seeking comment. The facility has a below-average ranking, two of five stars, by the Centers for Medicaid and Medicare Services.

The poor marks led Jacobs’ granddaughters to question why the facility was allowed to care for COVID-19-positive patients at all.

The Texas Health and Human Services Commission confirms it is now actively investigating the facility for compliance with all health and safety rules.