Dueling candidates with same name could cause confusion at the polls

You may think you're seeing double if you're voting in the Harris County Precinct 2 constable race. One candidate claims it's a 'dirty tactic' by his opponent. 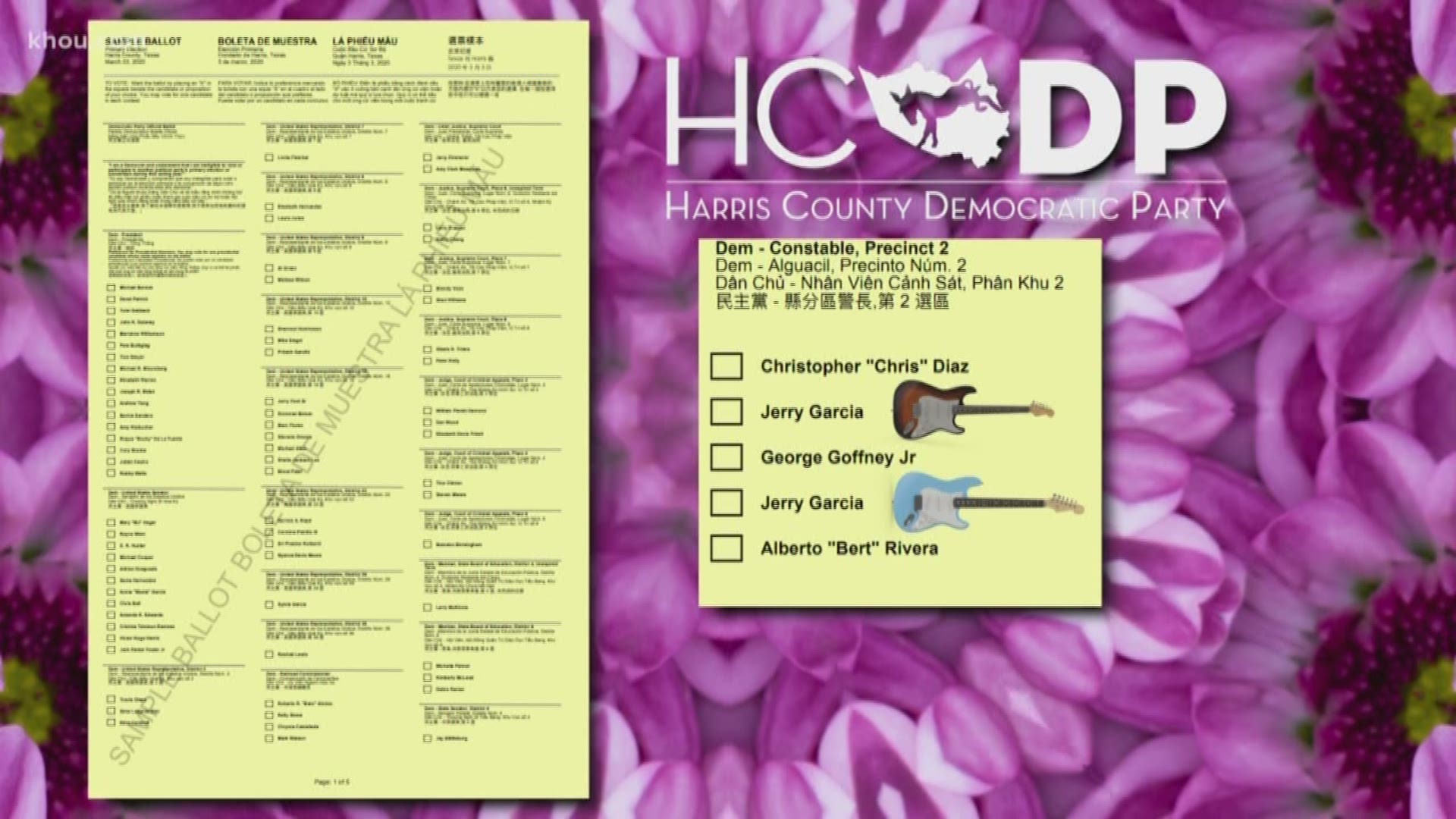 HARRIS COUNTY, Texas — Claims of dirty tricks and foul play have some wondering if a Harris County primary race is “Jerry-rigged.”

This time, it’s not your class case of name calling between candidates, but it is all about the name.

In the upcoming Democratic primary election for Harris County Precinct 2 constable, two candidates named Jerry Garcia appear on the ballot. Yes, they both have the same moniker as the late Grateful Dead guitarist and songwriter.

“All it is is a dirty tactic to confuse and deceive our voters,” said the Garcia who currently serves as a lieutenant for the Precinct 3 Constable Office.

Credit: KHOU
Lt. Jerry Garcia has over 21-years in law enforcement and has been campaigning for over a year for the Harris County Precinct 2 constable's race. He feels his fellow candidate who shares his same name is using a "dirty tactic" to confuse voters.

Garcia said it’s even more deceiving, given that his opponent with the same name is related to the incumbent, Chris Diaz. He is the cousin of the current constable’s wife.

Some voters at a local restaurant where Garcia recently campaigned agreed that the scenario muddies the water for those soon heading to the polls.

KHOU 11 Investigates tried to ask the other Jerry Garcia—the one with no police experience—whether his candidacy was all just a political ploy. No one answered at his Galena Park home, but there was a campaign sign in the yard—for his cousin-in-law Chris Diaz.

Credit: KHOU
KHOU 11 Investigates wanted to know if the non-law enforcement Jerry Garcia was running just as a political ploy, but no one answered at his home.

“It definitely doesn’t pass the smell test,” Rottinghaus said. “It creates real problems in terms of what voters are really getting.”

Those problems can have a lasting, negative effect on voters, according to Rottinghaus.

“If they don’t think it’s fair, if they’re confused by the process, they just won’t vote,” he said.

To add to the confusion even more, the Jerry Garcia who joined late in the game, later filed paperwork to pull out of the race. But as it turned out, his application to withdraw was too late.

D.J. Ybarra, who serves as the executive director of the Harris County Democratic Party, said his organization consulted with the Texas Secretary of State’s Office, which provided an interpretation of election law.

“He stays on the ballot, his votes still count,” Ybarra said.

Credit: KHOU graphic
A sample ballot of the Harris County Precinct 2 constable's race shows two candidates named Jerry Garcia. But one Jerry Garcia, who has a law enforcement background, was able to get (Harris County Lieutenant) added next to his name.

Election officials did come up with a workaround—of sorts. They allowed candidates in the primary race to add a title after their name. The veteran lawman Jerry Garcia chose to add “Harris County Lieutenant” on the ballot. His opponent Garcia did not submit any title.

Whether you call this race “Jerry-rigged” or not, to quote the rock-and-roll hall of famer Jerry Garcia, “what a long strange trip it’s been” in the race for Precinct 2 constable.