They drive drunk. Kids are in the car. Most never see jail time.

Driving while intoxicated with a child in your car is a felony in Texas. But most charged in Harris County make plea deals and don’t spend any time behind bars. 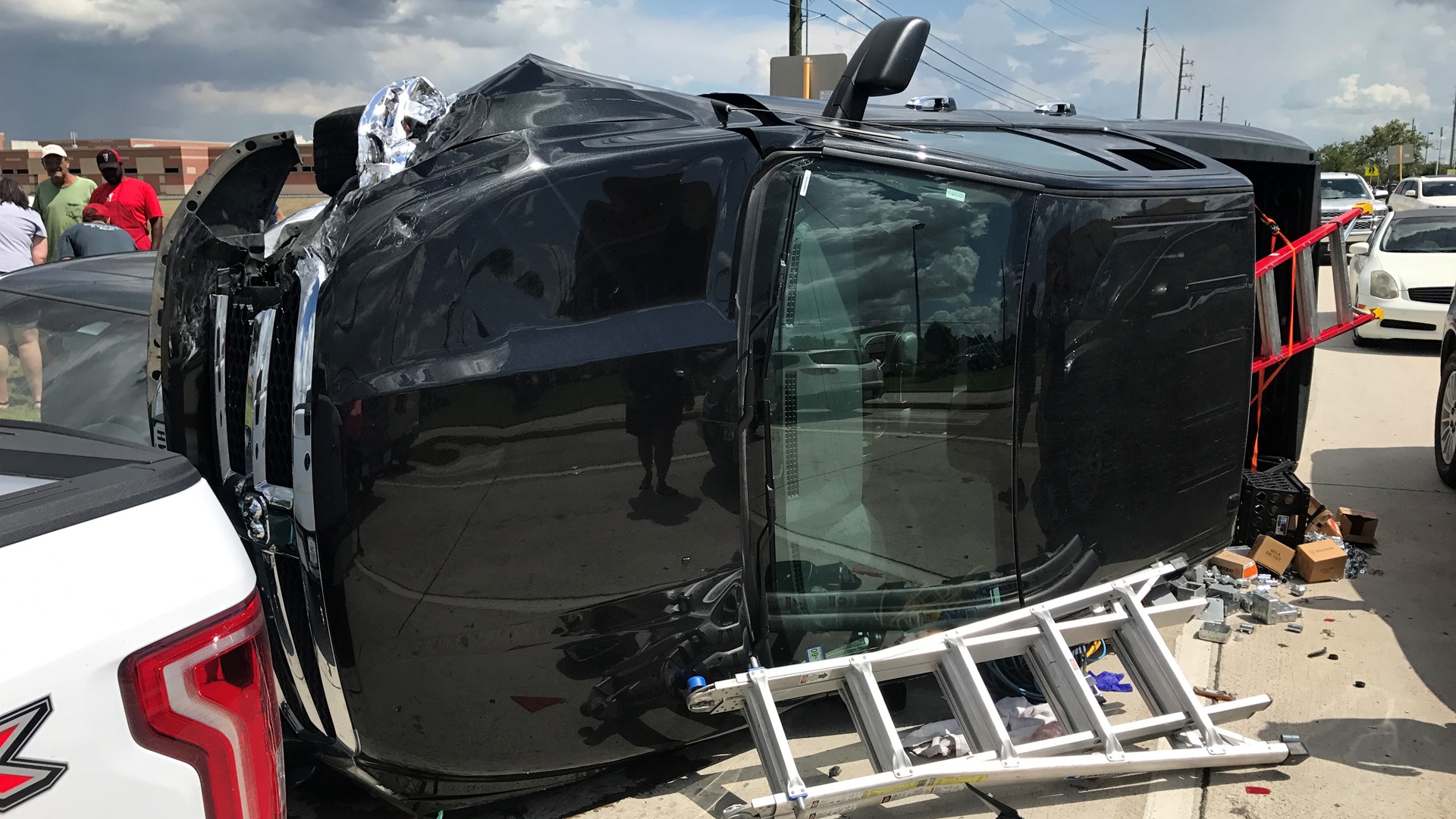 HARRIS COUNTY, Texas — A silver Chrysler minivan sat motionless blocking a left turn lane when a deputy constable approached from behind one October afternoon in 2018. The van matched the description of a car reported to 911 having been swerving throughout the roadway and driving on a sidewalk on Kuykendahl Road near the Grand Parkway.

Deputy Dillard with the Harris County Precinct 4 Constable’s Office stepped out of his patrol car and walked to the minivan. Almost immediately he smelled alcohol coming from the driver.

Christine Good, 33, sat in the driver’s seat with her 4-year-old daughter in the back. She fumbled around for her license and registration but couldn’t find it. Dillard asked her to put the van in park and step out. She told him it was—although, as the deputy told her, a green “D” illuminating from the dashboard noted otherwise.

“Ma’am, I need you to step out of the vehicle,” Dillard told her.

“Let’s go. Step out of the vehicle,” Dillard told her.

Finally, Dillard opened her door and began to pull her out. Good stumbled out of her seat and fell to the ground—her head nearly striking the concrete median. As she lay on the street mumbling incoherently, Dillard reached for his handcuffs.

Good was taken to a local hospital, where test results later showed she had a .442 blood alcohol content, or BAC, which is used to determine the level of inebriation in a person. A 0.08 is considered intoxicated in Texas. Good was more than five times that legal limit.

She was charged with driving while intoxicated with a child passenger and endangering a child, both state jail felonies in Texas punishable by up to two years in jail.

Like most others facing similar charges in Harris County, Good wouldn’t see any jail time.

She agreed to a plea deal with the Harris County District Attorney’s Office. The DA’s office dropped the child endangerment charge and Good pleaded guilty to a reduced charge of misdemeanor DWI, rather than the felony DWI with a child passenger. She received two years’ probation.

Court records reviewed by KHOU 11 Investigates revealed it’s a common occurrence in Harris County. From January 2017 to September 2019, nearly two-thirds of DWI with a child passenger cases—or 65 percent—resulted in probation.

Advocates against drunk driving say that statistic sends the wrong message and puts the public at risk.

“That’s a slap on the wrist,” said Julio Zaghi, manager of victim services for the Southeast Texas chapter of Mothers Against Drunk Driving, or MADD. “That’s like saying, ‘Continue with your behavior because the consequences are going to be minimal.’”

Fola Onigbinde had just left church on a Sunday morning in May 2017 when she was rear-ended in southwest Harris County. The red sedan that hit her crashed into two other cars, kept going through the intersection and ran into two other vehicles across the street.

Onigbinde couldn’t believe what she saw.

“Everything was happening so fast and I was like, ‘Oh, my God, this is really scary,” she said. “We were like, ‘(The driver) must have had a seizure.’ We were so sure that it was probably like a seizure.”

Smith later agreed to a plea deal with the Harris County DA’s office in which she pleaded guilty to a misdemeanor DWI and received two years’ probation.

And Smith isn’t the only drunk driver who’s crashed their cars with kids on board. Records reviewed by KHOU 11 Investigates showed that consequences can be minimal for them, too.

Maria Balderaz was picking up children for school when she crashed into a ditch and damaged the front end of her white van. Police said Balderaz failed sobriety tests and her blood alcohol level was .154, nearly twice the legal limit.

Balderaz’s felony charge was reduced to misdemeanor DWI on a plea deal with the DA’s office. She was sentenced to two years’ probation. She didn’t respond to requests for comment.

Priscilla Pena had an infant in her car when she crashed into another vehicle around midnight outside of a bar. A witness told police Pena then put her SUV in reverse and drove away with two wheels on the sidewalk. She only made it a couple of hundred feet before she crashed into a pole.

Tests later showed her blood alcohol level was .19, more than two times the legal limit. She pleaded guilty to DWI with a child passenger and received five years’ probation.

“I paid my dues and continue to serve my probation,” she said in a phone interview.

Zaghi with MADD said in these cases, there should be no room for leniency.

“It’s child abuse,” he said. “You’re endangering a child and you’re given another chance. There (needs) to be zero chances.”

Why probation? A ‘restorative justice’ approach

Sean Teare isn’t concerned that second chances are given in nearly two-thirds of all DWI with passenger cases in Harris County.

The veteran prosecutor, who oversees the vehicular crimes division, said defendants who receive probation are monitored weekly and must comply with several conditions or risk getting their probation revoked. Those restrictions might include suspending their license or requiring drivers to blow into an in-car breathalyzer before starting the ignition. Community service or attending alcoholics anonymous meetings also may be mandatory probation conditions. Teare said there are any number of factors that can go into the plea bargain process and he would not “Monday morning quarterback” any prosecutor’s decision to offer probation.

“We are a restorative justice office,” Teare said. “Probation for first-time offenders, probation for people that have a problem and are willing to seek help, is not giving them a long leash. That’s trying to get people to go forward with their lives. That’s trying to keep family units together.

When it comes to deciding punishment, Teare said prosecutors often look at the defendant’s past criminal history to determine what’s an appropriate penalty. But KHOU 11 Investigates found dozens of people who had previous alcohol or drug-related cases and still received probation.

Most notably is Jeanette Murillo, a 41-year-old woman from Katy. Dramatic video shows a Fulshear patrol sergeant driving in the middle of the night in June 2018 when he found Murillo lying in the roadway. As the officer tried to wake her up, Murillo could barely stand. She was charged with public intoxication.

Five months later, she was arrested by Harris County Sheriff deputies for DWI with a child passenger. In that case, prosecutors dropped the felony charge down to a misdemeanor and gave her probation.

And seven months after that arrest, Murillo was arrested near Beaumont for, once again, driving drunk with a child in the car. That case is still pending.

Zaghi with MADD called the chain of events a “ticking time bomb” for future serious injury or death.

RELATED: Mother charged with murder in wreck that killed her 3-year-old son

When asked, Teare with the Harris County DA’s office conceded that plea deals for probation can sometimes be rolling the dice.

“I have stood over so many dead children, so many dead people on our roadways—of course it’s rolling the dice,” Teare said. “But you also have to balance that with we have a job to restore members of the community going forward, and it’s a balancing act.

“It’s one we have to do every single day.”