Sandra Young has owned Bokeeters Bar in New Caney for 11 years and said it needs to remain open for the livelihood of its employees. 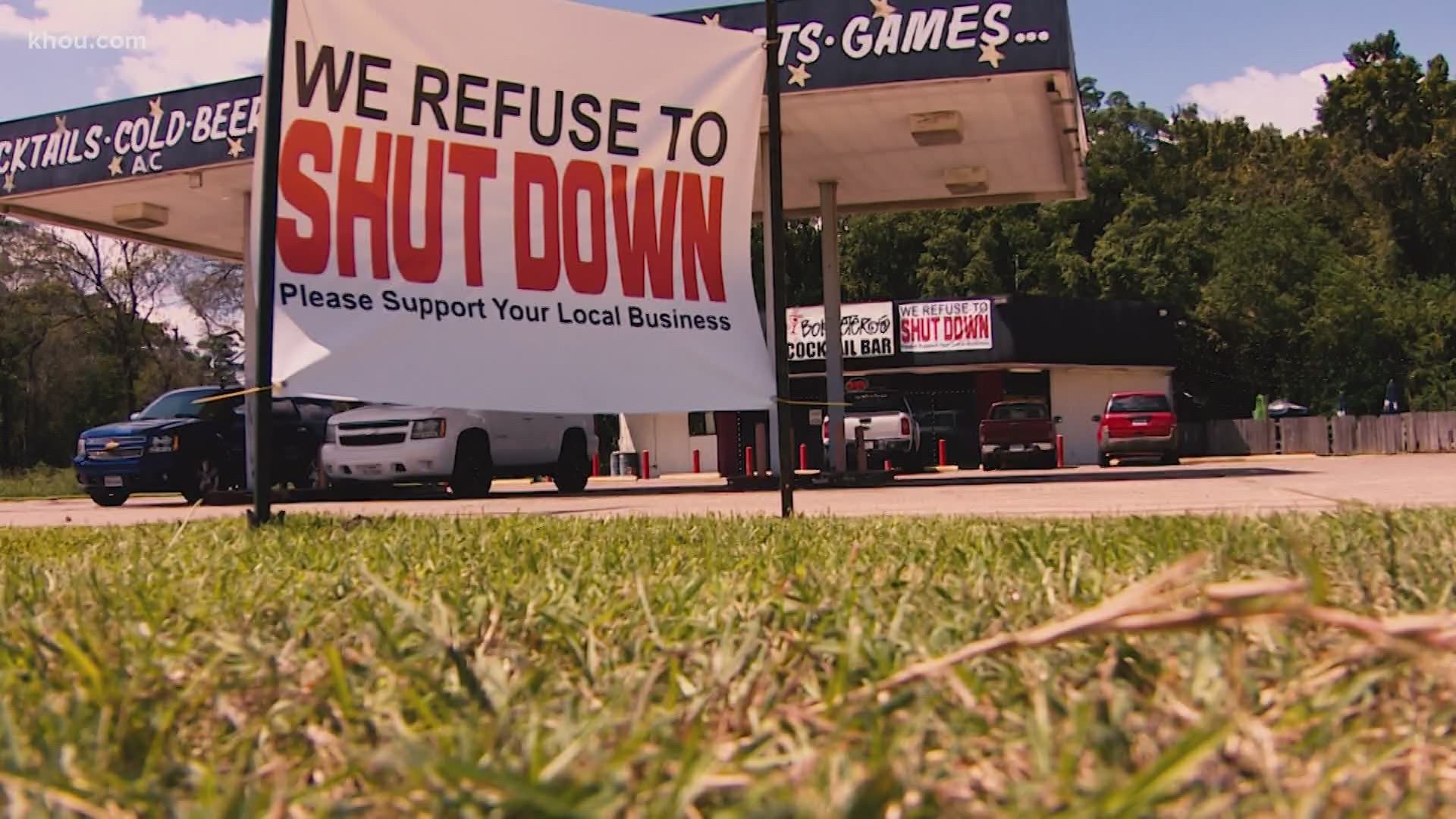 NEW CANEY, Texas — Despite Gov. Greg Abbott’s emergency order prohibiting people from visiting bars, a Montgomery County bar owner has kept her business for more than a month and has no plans of backing down.

“I will not close,” Sandra Young said.

After shutting down under Abbott's initial executive order in March, Young said her bartenders and staff were on the brink of not being able to pay rent and other bills. One bartender even lost her apartment.

“We had to go back to work,” Young said.

The Texas Alcoholic Beverage Commission subsequently filed two emergency orders of suspension against her permits to sell alcohol. On June 28, the agency issued a 30-day suspension. When TABC officers tried to serve Young with a 60-day suspension, she had a relative record the encounter and post it on YouTube.

“Can I get you to print and sign your name?” an unidentified TABC agent is heard on the recording.

“No, I’m not signing anything,” Young said. “Y’all are making fools out of yourselves, that’s what’s happening here."

The TABC agents left that August night and Bokeeters has remained open ever since.

“Nobody was even willing to test the waters, so I jumped in cannonball,” Young said.

Young had already convinced nearly a dozen other bar owners to jump in, too. In late June, they filed a lawsuit against the TABC and Abbott, claiming the governor “sentenced them to bankruptcy” with an order that “violates the Texas constitution.”

That case is still pending in a Travis County court.

Meanwhile, the state has offered bar owners a workaround by opening up a kitchen or having a food truck on premises and applying for a food and beverage certificate, which reclassifies them as a restaurant.

Restaurants who derive 51% or more of their gross receipts from food sales are exempt from the state emergency order. According to the TABC, about 660 Texas bars each paid a $776 application fee to get reclassified as a restaurant. The state received more than $500,000 in the process.

“I’m not paying TABC one red cent,” Young said. “I’m not understanding the switching (permits) to food, because I really don’t believe coronavirus can tell the difference whether you’ve got chips and salsa or just a pint of beer.”

For now, the legal showdown continues, with no clear timetable on when the state may take further action.

"TABC’s ... last resort is to cancel a business’s permit to sell alcohol,” TABC spokesperson Chris Porter said. “We want businesses to understand we will give you the opportunity to voluntarily comply, but if you continually choose to violate the law and if you announce your intentions to violate the law, then you leave us no choice other than to eventually cancel your permit.”

Porter said the agency has conducted approximately 16,000 inspections of bars and restaurants and has issued about 150 suspensions for violations of the governor’s emergency order. So far, the agency has not canceled any licenses, but Porter said that could happen at administrative hearings in the coming weeks.