Houston area doing better than state in new COVID-19 cases, but another surge may be coming

Although the region is doing well at the moment, experts are warning that a surge may be coming. 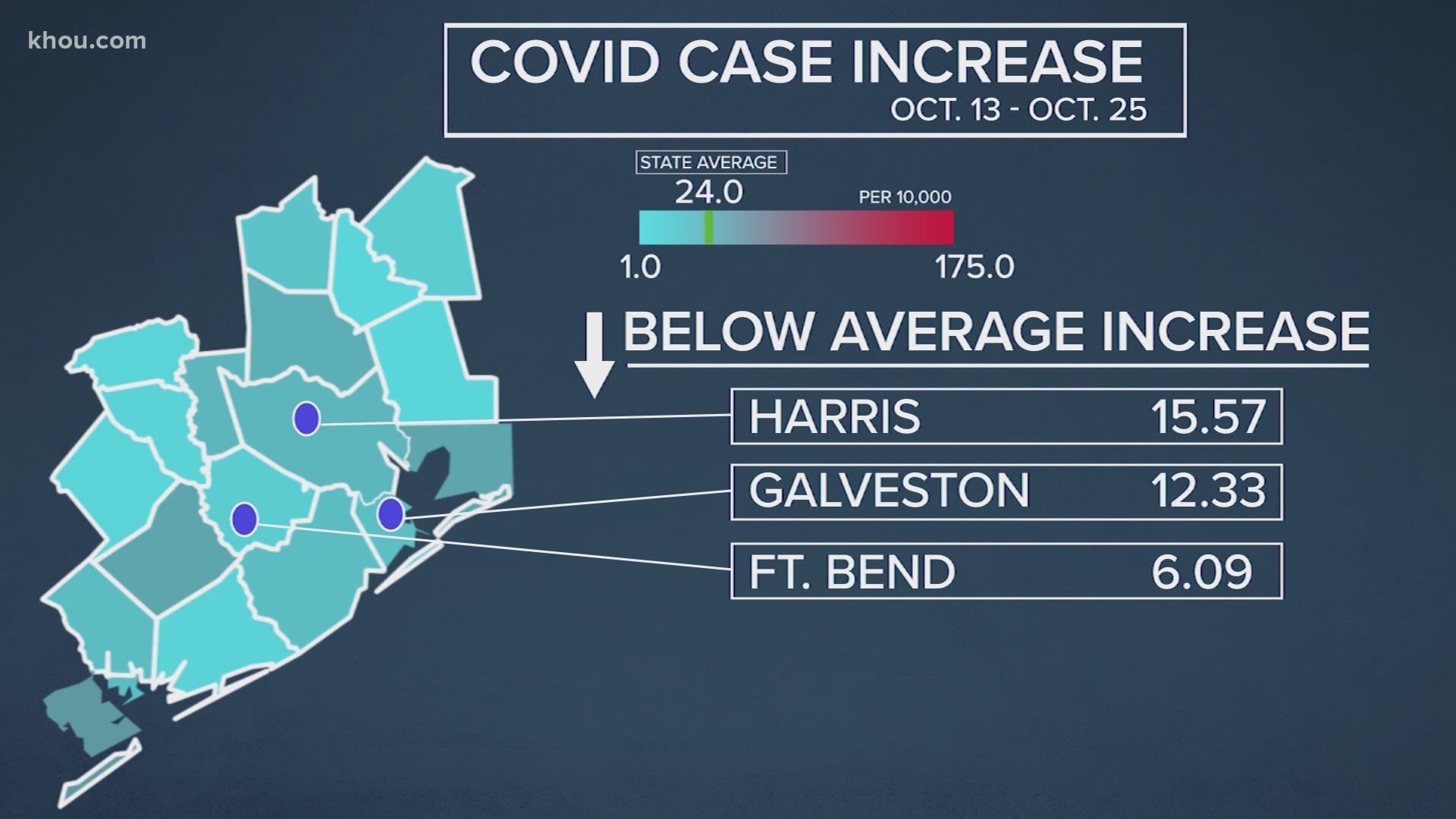 HOUSTON — The greater-Houston area has not seen a spike in new coronavirus cases like the one overwhelming some West Texas counties, but some health experts worry the surge there could be heading our way next.

KHOU 11 Investigates analyzed the increase in Texas COVID-19 cases over the past two weeks. Statewide, there’s been an average of 24 new cases per 10,000 people.

The data reveals nearly all counties around Houston are below that average, with large urban areas reporting significantly lower numbers.

“We’re going through a phase that I call slow and steady,” said. Dr. Luis Ostrosky, an infectious disease specialist with UT Physicians and UT Health. “(It) makes us feel comfortable because we're not exceeding our hospital capacity, we're not seeing people around us getting sick necessarily. But we should not get too comfortable with this phase.”

It’s a different story in West Texas. New cases in the counties of Coke, Dawson, Culberson, Hale and El Paso are between five and seven times higher than the state average.

But in raw numbers, it’s first in that area and the state with 10,827 new cases over the past two weeks.

“And I think that will come here, I think we’re going to end up seeing a surge in Houston,” said Dr. James McDeavitt, senior vice president and dean of clinical affairs at Baylor College of Medicine.

McDeavitt said he doesn’t know how severe that surge will be in the Houston area, but he is sure of one thing.

“The virus is just as dangerous as it ever was, it’s just as infectious,” McDeavitt said. “We don’t have the vaccine yet, and until we do, every community is a pile of dry kindling waiting to ignite, so when you push the kindling together, it’s going to ignite.”

A potential flashpoint is around the corner is Thanksgiving. McDeavitt said some families might find it unrealistic to cancel plans altogether. That’s why he’s created a “holiday bubble checklist” in both English and Spanish, to minimize the risk of virus spread.

The checklist was inspired, in part, by the NBA’s “bubble” plan, in which the league sequestered players in Orlando throughout the playoffs. McDeavitt advises families to designate one person as “bubble commissioner” who will oversee mitigation efforts by relatives. Those include a commitment to distancing and cloth masking and a diagnostic PCR coronavirus five to seven days prior to travel.

“The No. 1way to get COVID currently is with small gatherings, indoors,” Ostrosky said. “It’s not big concerts or the beach or anything like that, it’s just hanging out with your family and friends in an enclosed space."