The original affidavit Gerald Goines wrote to get the search warrant authorized was full of lies, prosecutors said Friday. 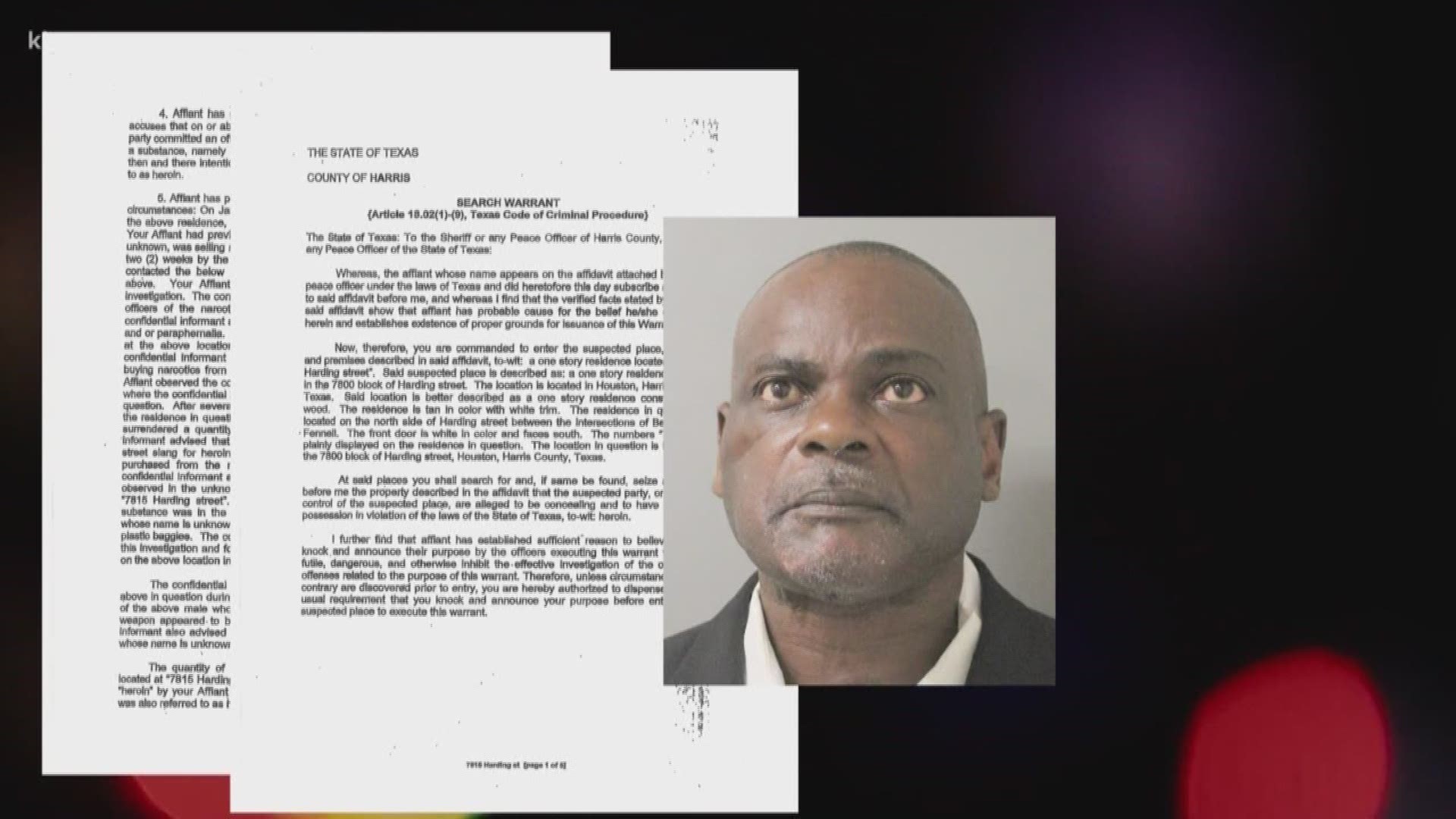 HOUSTON — Gerald Goines was a 32-year Houston police veteran, a member of HPD’s Narcotics Squad 15 and the case agent who led the raid. He was the one who rammed the door of the Harding Street home.

The original affidavit Goines wrote to get the search warrant authorized was full of lies, prosecutors said Friday.

He claimed a confidential informant had bought heroin from the home Jan. 27, the day before the raid. Goines also claimed in the affidavit that fellow Squad 15 officer Steven Bryant recognized the substance as “boy,” street slang for heroin.

After the raid ended in a gun battle with four officers shot and two homeowners killed, Houston Police Chief Art Acevedo stood by the story he knew at the time.

“We actually bought black tar heroin at that location,” Acevedo said in a news conference the day after the raid.

But no heroin was ever found, according to court records. Neither was the supposed confidential informant who bought it.

Ogg’s office filed a felony charge of tampering with a governmental record and two counts of felony murder against Goines.

According to Ogg, Bryant was also in on the lies when he wrote a supplemental report two days after the raid.

In it, Bryant claimed he “observed a plastic bag” containing “two small packets of a brown powdery substance (heroin) that was bought from the Harding Street home.

Bryant faces one felony charge of tampering with a governmental record.

Ogg called the charges against both officers “action number one” in a sweeping review of thousands of drug cases filed by Narcotics Squad 15.

“While today the focus is on Gerald Goines and Steven Bryant, there may be more to the story,” she said. 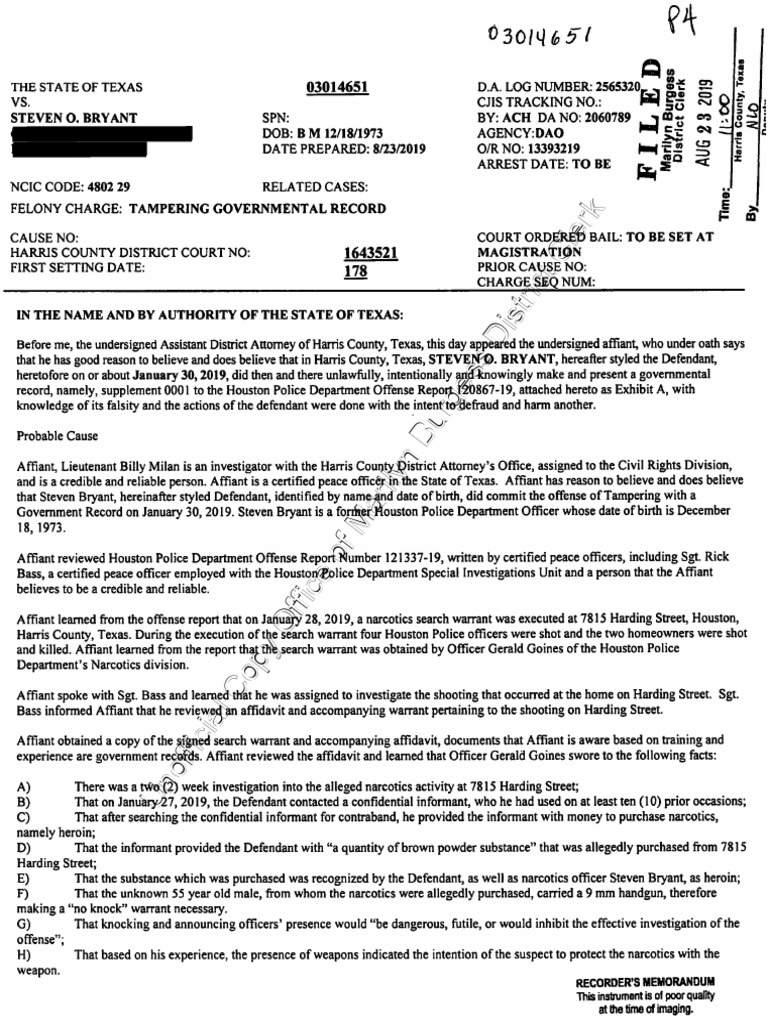 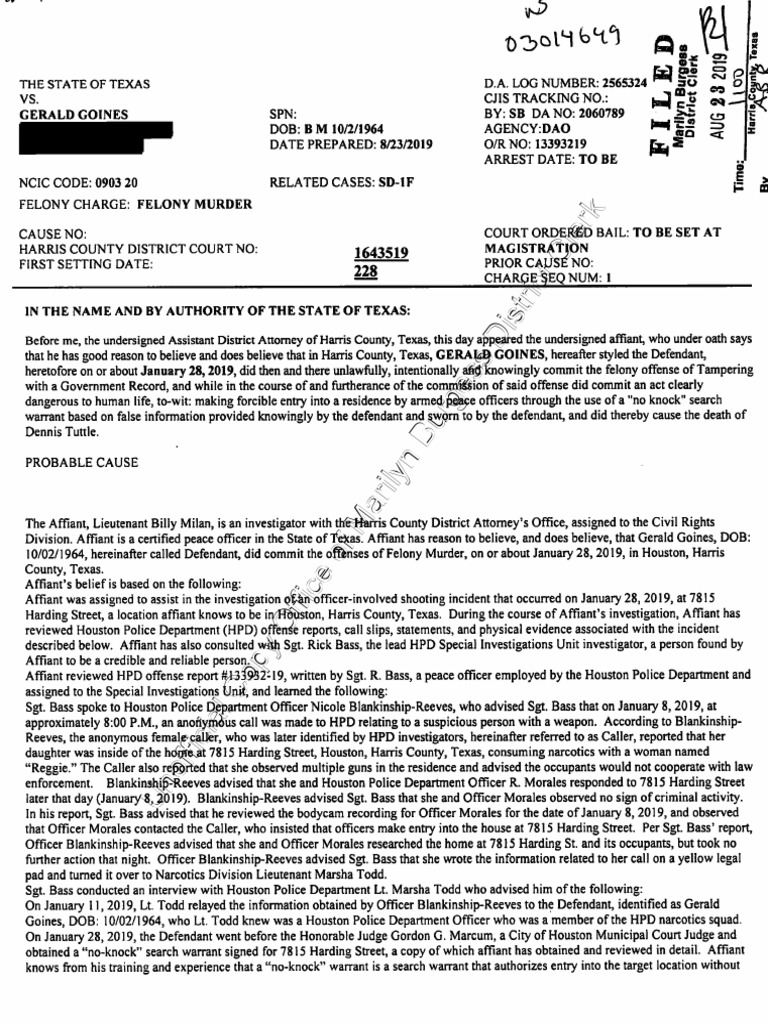 Gerald Goines Complaint | Search Warrant | Police Officer
k erCAUSE NO: COURT ORDERED BAIL: TO BE SET AT ClHARRIS COUNTY DISTRICT COURT NO: 1643519 MAG ISTRA TIONFIRST SETTING DA TE: PRIOR CAUSE NO: 228 t CHARGE SEQNUM: I ric IN THE NAME AND BY AUTHORITY OF THE STATE OF TEXAS: ist sDBefore me, the undersigned Assistant District Attorney