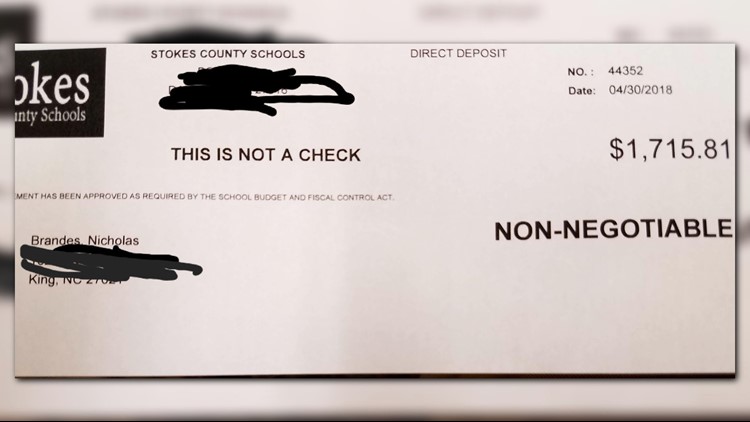 Thursday, a Stokes County teacher showed his paycheck in a Facebook post and shared some raw emotions about what teachers in NC are paid.
Author: WFMY News 2 Digital, Carly Flynn Morgan
Published: 8:21 AM CDT May 12, 2018
Updated: 6:28 AM CDT May 13, 2018

Stokes County, N.C.-- Thousands of teachers will take their voice to Raleigh on Wednesday May 16 for the 'March for Students and Rally for Respect' event.

Several Triad and other North Carolina school systems are shut down for the day, because of the number of teachers who have requested off to attend.

Thursday, a Stokes County teacher posted a copy of his May pay in a Facebook post and shared some raw emotions about what teachers in the state are paid.

When the WFMY News 2 Digital Team reached out to Nick Cols for permission to share his post, he agreed. He also wanted everyone reading this to know, his Principal and Superintendent are very supportive of teachers who are attending. Cols said he won't be going to the rally, because he can't afford to take the day off and lose the pay.

Cols was issued a paycheck on April 30 for $1,715.81. He says that’s his take-home pay after taxes, insurance and childcare fees were automatically removed. He says that has to last until his next paycheck on May 31. That's 32 days and when you do the math that equals about $53 per day.

Related: LIST | School Districts Closing On May 16 For Teacher Rally

Read Cols' Facebook post in its entirety to get his take on his chosen field, teacher pay and the rally in Raleigh.