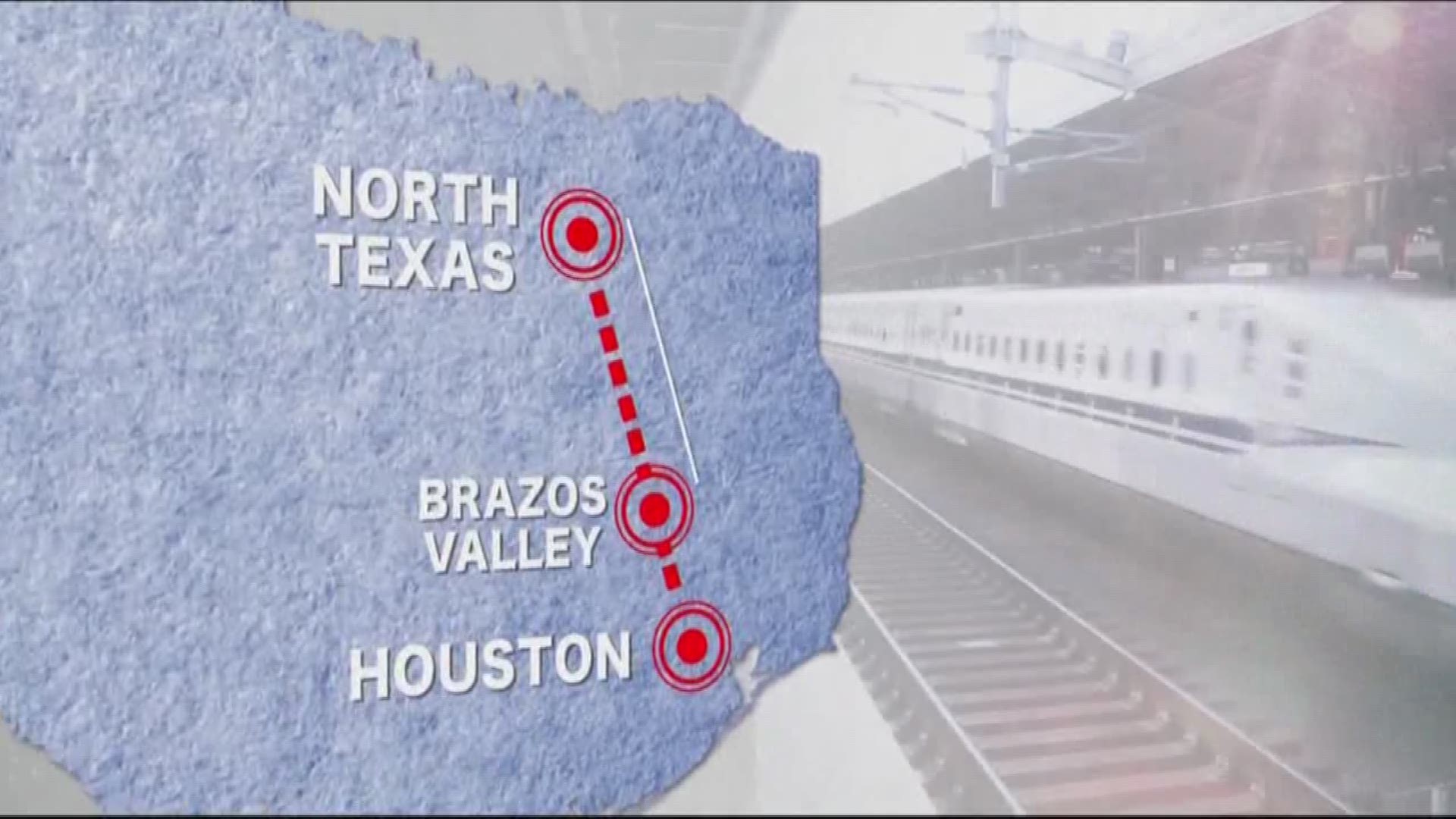 Imagine going from Houston to Dallas in just 90 minutes. A proposed bullet train could do just that and plans for it took a big step forward on Thursday.

Houston’s mayor and Texas Central Partners signed a “memorandum of understanding” on a high-speed train that would travel up to 200 miles per hour and will be paid in $15 billion private funding.

Essentially, an MOU means the city and rail company are promising each other that they’re serious about making this project happen, though the agreement is not legally binding.

If the train becomes reality, supporters say it’ll be the first of its kind in America and bring 1,000 permanent jobs and 10,000 construction jobs.

However, some living along the route worry their way of life could suffer.

“To me, it’s a signature moment for the state of Texas,” said Mayor Sylvester Turner, during a press conference at City Hall on Thursday. “Over the next 12 to 15 years, we’re expecting about 3 million more people to come into the Houston region. You gotta move those people.”

Turner said congestion on I-45 between Houston and Dallas will double by 2035, increasing travel time from 4 hours to more than 6.5 hours.

Supporters say if the city and Texas Central don’t go full speed ahead on this issue now, commutes won’t be the only thing slowing down in the future.

“You’ll have (a) crisis situation with regard to an inability to move people properly,” said Amanda Edwards, Houston City Council Member At-Large Position 4. “That will stifle growth, economic growth in our city.”

After a quick stop in Grimes County, in the Brazos Valley, the train will make its way into Houston along Hempstead Road and pull into the station somewhere around the old Northwest Mall at Interstate 610 and U.S. Highway 290.

Just across the street at Locknology Security Solutions, which has been in business since 1978, owner Wayne Guillory says he could see the impact to his business "being positive or negative.”

“Depends on how they route it,” says Guillory. “If it would just bypass us and people couldn’t get to us anymore, or if it’s routed some other kind of way, it might be a stop where people…might be seeing us.”

Guillory says eminent domain from the highway construction at 610 and 290 has already impacted neighboring businesses, and doesn’t want to see it with this project.

Many rural landowners along the route, including in Grimes County, are concerned about eminent domain and other issues.

“I’ve been told that you will be able to feel some kind of tremor,” said one Grimes County resident during a meeting on the issue. “(The train) would start at 5:30 in the morning and it would stop at 11 o’clock at night.”

However, Texas Central officials say rural counties will reap economic benefits from the project, which they say will “draw supplies and labor from across rural Texas,” and they say 25 percent of the permanent jobs will be in rural communities.

Officials say the project’s Shinkansen trains, which run along several routes through Japan, have had no injuries or fatalities from train accidents in more than 50 years of operations.

Texas Central officials say they’re still figuring out where the stations will be and exactly what the route will look like.

Houston City Council will give final approval on the specifics, which could happen in a matter of months. Mayor Turner hopes construction will start late 2018 and wrap up by 2023.

While ticket prices haven’t been set, Texas Central officials “expect ticket prices to be very competitive” with those of airlines.”