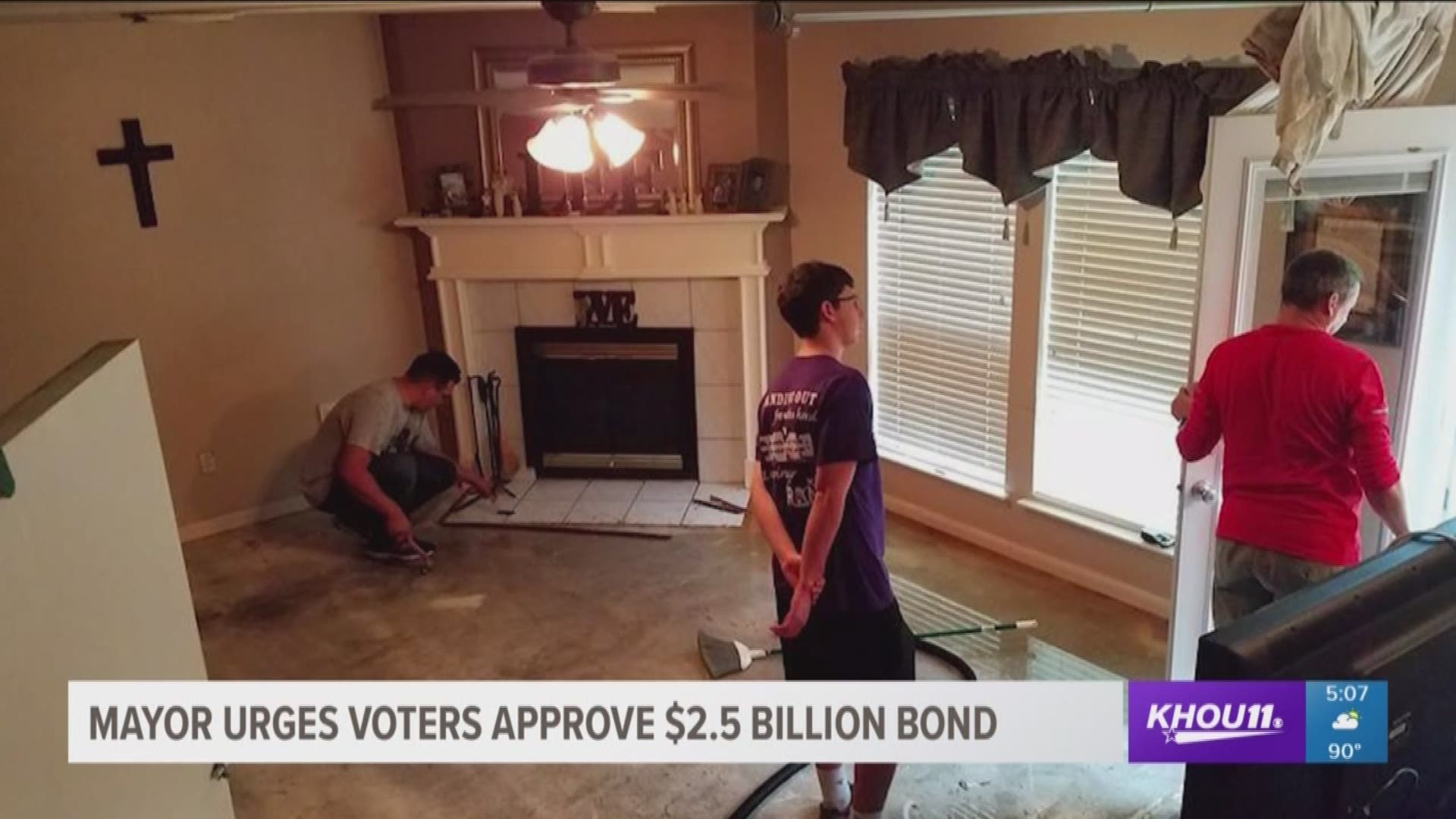 HOUSTON — Early voting is underway on Harris County’s $2.5 billion flood control bond and lawmakers at the city, county and federal level are keeping their fingers crossed.

During a Thursday morning news conference at T.C. Jester Park in the Oak Forest neighborhood of northwest Houston, Mayor Sylvester Turner and County Judge Ed Emmett were two of the officials making a bipartisan plea to voters to pass Proposition A.

“This vote is one of the most important votes that the people in the city of Houston will ever cast,” said Mayor Turner.

Nearly 250 projects were chosen after feedback from public meetings held in all 23 Harris County watersheds.

“We’ve added about 40 projects to the list specifically from those public engagement meetings,” said Judge Emmett.

Oliver Lee, Senior Pastor at Next Level Ministries in Katy, whose home and the elementary school space his church was renting flooded during Harvey, spoke at the news conference.

“I think (Harvey) was a huge wake-up call for a ton of people,” said Lee.

The interior of Lee’s home in Katy’s Williamsburg Parish neighborhood was flooded with nine inches of water.

“Everything on our bottom floor is lost,” said Lee. “A lot of memories, possessions, pictures, photos from when our kids were little.”

After 11 months, tens of thousands of dollars spent, and being ripped off by their first contractor, Lee, his wife, and two teenage children now have new walls, new furniture, new cars, and a new perspective on the Houston area’s vulnerability to flooding.

Thursday’s press conference took place inside a park along White Oak Bayou that also flooded during Harvey, as did many homes and apartments nearby.

“Wiped out my man cave and the garage,” said Mike Benestante, who did not have flood insurance for his nearby home. “It’s been pretty crazy.”

Tiffany Roberts says she got water inside her second-floor apartment located about two miles from the park.

“It ruined all my clothes,” said Roberts, who says she’s still waiting on a check from her insurance company. “It’s been horrible. The words I really wanna use I can’t say.”

“I lost my grandmother during Harvey,” said Roberts. “She lived in Beaumont. My grandmother was my best friend.”

Roberts said she was not familiar with Prop A, while Benestante said he was undecided and wanted to do a bit more research before voting.

“I’m just a little bit skeptical of the money involved, whether it’s gonna go where we need it, if it’s gonna be just in haste…or if it’s really thought through,” he said.

Still, Benestante and Roberts, like many people touched by Harvey, are hoping for relief before the next big storm rolls in.

Judge Emmett said Thursday the extra cost will be about five dollars per year per household for a $200,000 home, going up to about $50 after ten to 15 years, with exceptions.

“Senior citizens or those who are disabled who have a homestead exemption pay no county taxes on the first $200,000 value of their home,” said Emmett.