The Center for Disease Control says Texas is one of the 26 states reporting "high flue activity." In Houston, the health department says 10 percent of all emergency room visits are due to flu-like symptoms. 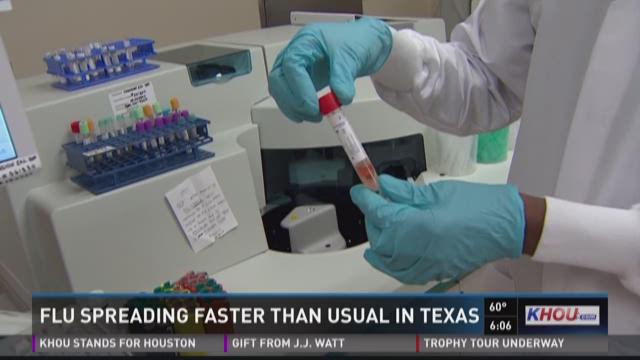 Doctors and hospitals are packed as the flu season seems to get worst, and Texas is no exception.

The Center for Disease Control says Texas is one of the 26 states reporting "high flue activity." In Houston, the health department officials say 10 percent of all emergency room visits are due to flu-like symptoms.

Lab workers have been busy running samples and testing people who think they may have the flu.

Hugo Vazquez is one of many who got tested. His girlfriend brought him to the hospital, saying he's been miserable for several days.

"He's had respiratory, congested, his back has been hurting, real nasally, his body aches, everything," said Zoe Garza, his girlfriend.

Dr. Heather Hamilton has been busy with flu cases for weeks now. She highly recommends getting a flu shot.

Related: Everything you need to know about the flu

Hamilton says the drug Tamiflu may also be harder to find now.

"A few patients have notified me that they went to their usual local pharmacy, and they didn't have Tamiflu so we would write a prescription form so they could go around town to find it," said Hamilton.

As for Vazquez, the flu test came back negative. But he's still very sick, and his girlfriend says she is ready to help.

"I want to be a nurse, so taking care of him gives me practice," said Garza.