Drinking alcohol better than exercise for living past 90, study claims

The 90+ Study, led by the University of California neurologist Claudia Kawas, says seniors drinking a moderate amount of alcohol each day lowered their risk of premature death more than seniors who exercise daily. 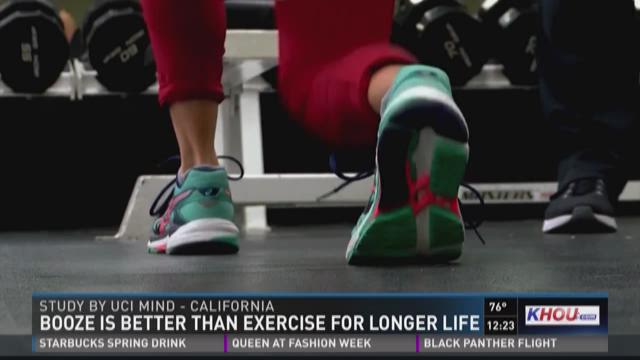 CBS BOSTON - Looking to live into your 90s? A new study suggests the answer to a long life might be found in your wine glass.

The 90+ Study, led by the University of California neurologist Claudia Kawas, says seniors drinking a moderate amount of alcohol each day lowered their risk of premature death more than seniors who exercise daily. The study has monitored over 1,600 people over the age of 90; which researchers call the fastest-growing age group in the United States.

According to the findings Dr. Kawas presented at the 2018 American Association for the Advancement of Science conference in Texas, having two glasses of wine or beer dropped the chance of premature death by 18 percent. Daily exercise for 15 to 45 minutes was found to only reduce premature death by 11 percent.

The findings clash with some studies which have linked heavy drinking to high blood pressure and cancer. However, they also support research which claims alcohol can increase mental clarity.

“I have no explanation for it, but I do firmly believe that modest drinking improves longevity,” Dr. Kawas told the AAAS conference, according to Tech Times. The 90+ Study also found that people who were overweight in their 70s lived longer than peers who were considered average or thin. “It’s not bad to be skinny when you’re young but it’s very bad to be skinny when you’re old.”

Researchers added that two cups of coffee also helped maintain longevity, lowering the risk of death by 10 percent. The biggest key to a long life that Dr. Kawas’ group found was having a hobby. Two hours of work a day on a hobby dropped the risk of death by 21 percent.