"I just didn't feel like I was doing enough. It just seemed like the right thing to do," said Wylie High School principal Virdie Montgomery. 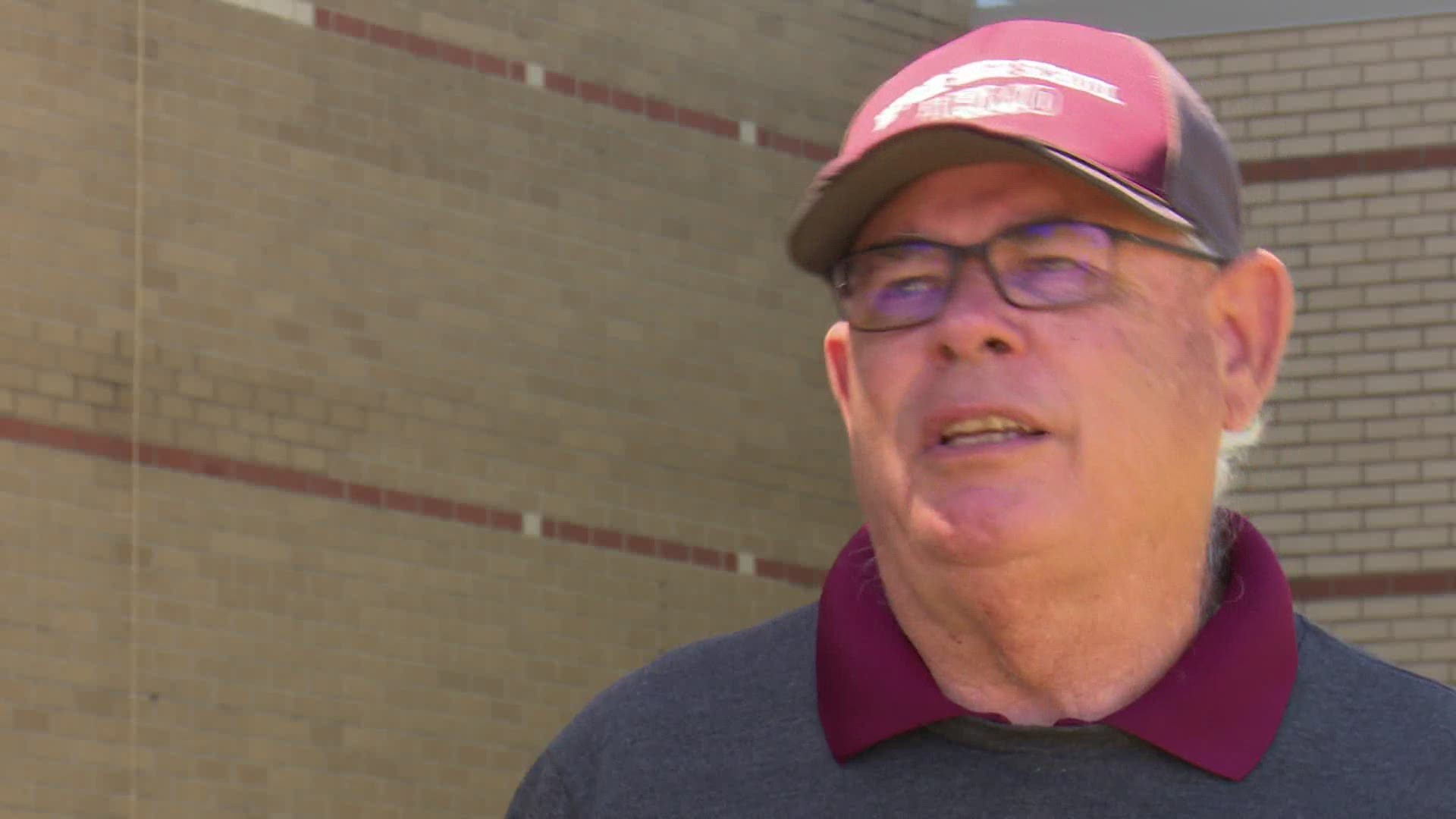 WYLIE, Texas — Principal Virdie Montgomery likes to think that his Wylie High School Pirates are one big family. But with that family separated and the campus closed due to concerns about the coronavirus, he decided he needed to pay his family a visit.

"We're a school of great tradition," the Wylie High School principal said. "If you ask the students, he's already a bit of a school-spirit legend: a man who's even donned his own elf-on-the-shelf costume and perched himself on top of the school marquee."

Lately he's been updating students and staff with daily announcements on YouTube: the 'corona chronicles' he calls them.

But Montgomery wanted to do something more.

"I get emotional real easy with my kids," he said. "And I just didn't feel like I was doing enough. It just seemed like the right thing to do."

The right thing to do, he decided, was for him and his wife to get in their car. "A 66-year-old fat, bald principal and his smoking hot wife" he wrote on Facebook.

"She told me I was crazy," Montgomery said, crazy to visit every Wylie High School Senior, at home or at work, wherever he could find them.

"I tell you what, that first day, at the end of the first day it felt like I had made a mistake. Because it was hard," he said.

It took Montgomery and his wife 12 days to reach 636 addresses to find all 612 seniors in a journey of more than 800 miles. Each time he carried a Snickers candy bar, (warning - Dad joke coming up) - to tell them one day they'll look back on all this and "snicker."

"I delivered that joke nearly 600 times. So it's pretty lame," he admitted.

"I'm a sucker for puns and stuff and that was perfect, that was right up my alley," said senior Savannah Skinner who says the principal's visit to her homemade her day.

"I'm not always in the best mood because it's been a while since I've seen anybody. So, it just brought a smile to my face and it made me really happy."

"It just gave me a peace about it," Montgomery said. "It's hard to put to words. It's rewarding just to know you did it."

"I think it was awesome. He's a very dedicated principal for sure," added Wylie parent Gayle Talley who arrived at the high school Wednesday morning to take graduation photos of her son Blake in cap and gown.

It's an old adage, and it might sound cliche, but good teachers always go the extra mile. In Wylie, sometimes even 800 miles just to let your Pirate family know that you still care.

"And I'm so, so, so, so very proud of them the way they've handled everything," said Montgomery.

The principal hopes his final gift to the 2020 senior class will be a graduation ceremony that will at least give them some semblance of a normal celebration. Those plans are still in the works.

Days away from 18th birthday, young woman featured on Wednesday's Child is adopted