Less than a third of available COVID-19 vaccines have been used in Texas, state data shows

Data published by the Texas Department of State Health Services shows providers have used 205,463 doses of the vaccine as of Wednesday afternoon. 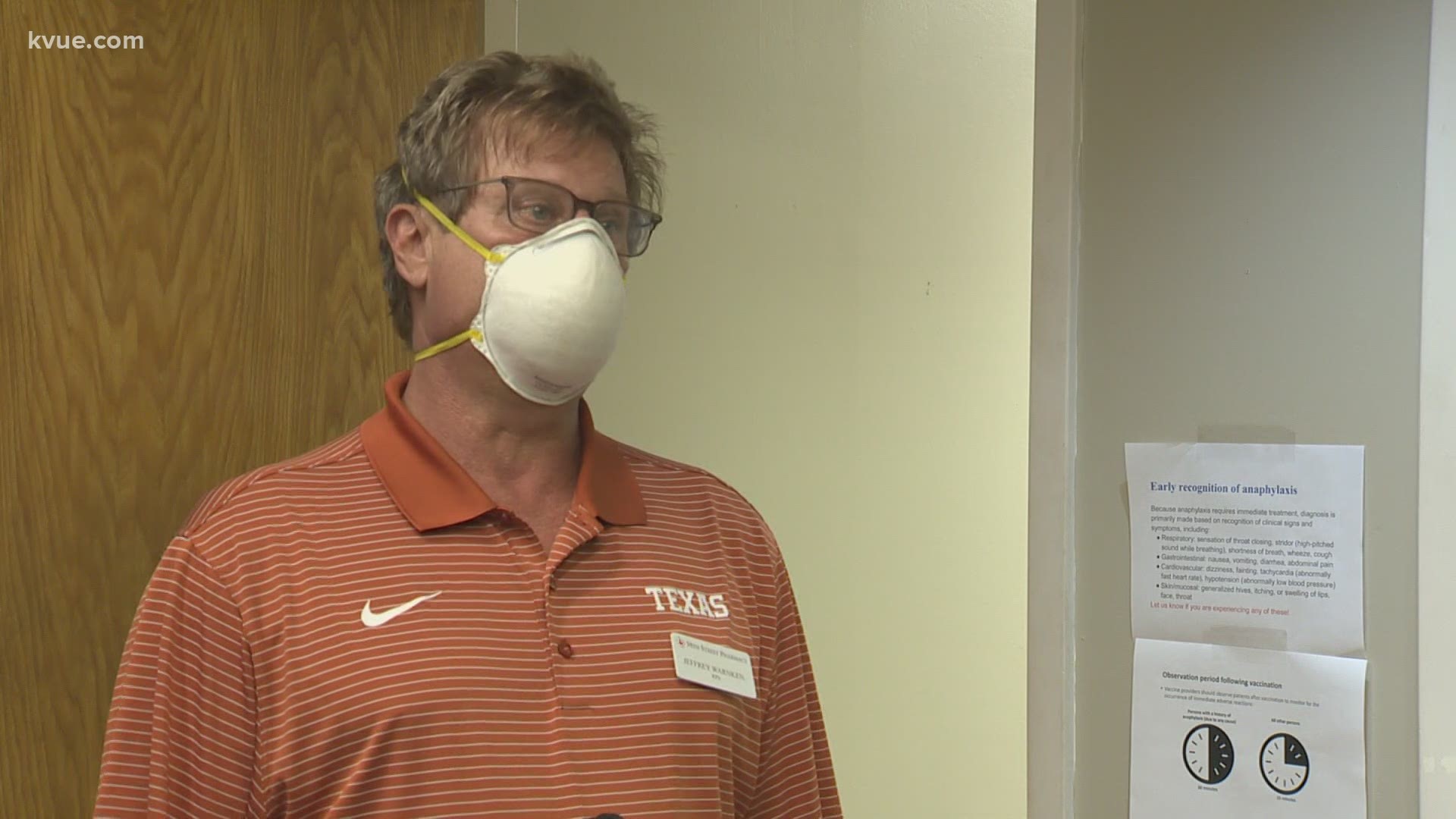 AUSTIN, Texas — So far, Texas health care providers have used about 30% of all the vaccines they’ve received, according to the Texas Department of State Health Services (DSHS).

Some government officials are pushing for hospitals to vaccinate people faster, while others insist the State’s numbers are wrong.

"I will say that I've been very impressed with the work that our hospitals have been doing," Dr. Escott said. “They're doing a great job of getting vaccines out as quickly as possible.”

But numbers from the DSHS don’t show that.

According to DSHS data published Wednesday afternoon, 205,463 people have been vaccinated, while 678,925 doses of the vaccine have been distributed to health care providers.

RELATED: Frustration, confusion over COVID-19 vaccine administration for Texans in Phase 1B

Texas healthcare providers have used less than 1/3 of the vaccines they have received, according to data from @TexasDSHS.

Some state leaders are pushing for hospitals to vaccinate people faster, but others insist the state data is wrong. Story tonight at 5 on @KVUE pic.twitter.com/U9uiCLGrol

So 30%, or less than a third, of the distributed doses have been given to Texans.

State leaders are pushing for a faster vaccination rate, including Gov. Greg Abbott.

"A significant portion of vaccines distributed across Texas might be sitting on hospital shelves as opposed to being given to vulnerable Texans," Abbott tweeted on Tuesday. “The state urges vaccine providers to quickly provide all shots."

RELATED: 'No vaccine should be kept in reserve:' State officials pushing for quicker shot administration to healthcare workers, Texans over 65

But Dr. Escott claims the State’s numbers are just wrong.

"I'll tell you that the state's reporting that on vaccines is way off,” Dr. Escott said. "There's a data lag in that reporting. But rest assured that the providers that have [the] vaccine are getting it out the door as quickly as possible."

KVUE reached out to the DSHS asking for a comment, and received the following statement:

"There are several factors that have impacted the counts on the vaccine dashboard. The first being the lag in the reporting process. Providers have 24 hours to enter their doses administered into ImmTrac2, the state’s immunization registry. Data is pulled from the system at midnight the day before it is posted on the dashboard so depending on when you look at it, it could be as much as two days behind real time.

"DSHS is also aware of some issues that providers have had with submitting their information and we’re working with them to resolve the problems. For example, the system will not accept files that have issues like an improper date format. We are hosting a webinar for providers to review common errors that may prevent their data from being uploaded.

"Some week 2 shipments were delayed and not delivered until this week. DSHS was notified on 12/23 that 421 Moderna shipments (144,400 doses) were going to be delayed. We were not given a reason for the delay. 399 of those shipments were received by providers on 12/28 and 22 were received on 12/29. Those doses show on the dashboard as received but the administration of them might not show up until tomorrow.

"The provider data submission issues, delayed shipments from last week that arrived this week, and the data lag that is part of the reporting process have all contributed to the dashboard not showing all of the doses administered statewide but it doesn’t explain the entire difference between the doses received and administered. Our goal is to get people in our priority populations vaccinated quickly and reduce the number of hospitalizations and deaths from COVID-19. We want everyone to know that more vaccine is coming each week and we want to use all of the vaccine in Texas each week. We’ve directed providers to vaccinate everyone they can in the priority groups so we can reach this goal."

DSHS updates the online vaccination count every day at about 4 p.m. You can find that data here.

WATCH: Confusion after COVID-19 vaccine opens to Texans in Phase 1