US data shows AstraZeneca's COVID-19 vaccine effective for all adults

The U.S. study found the shot was 79% effective in preventing symptomatic COVID and 100% effective in stopping severe disease and hospitalization. 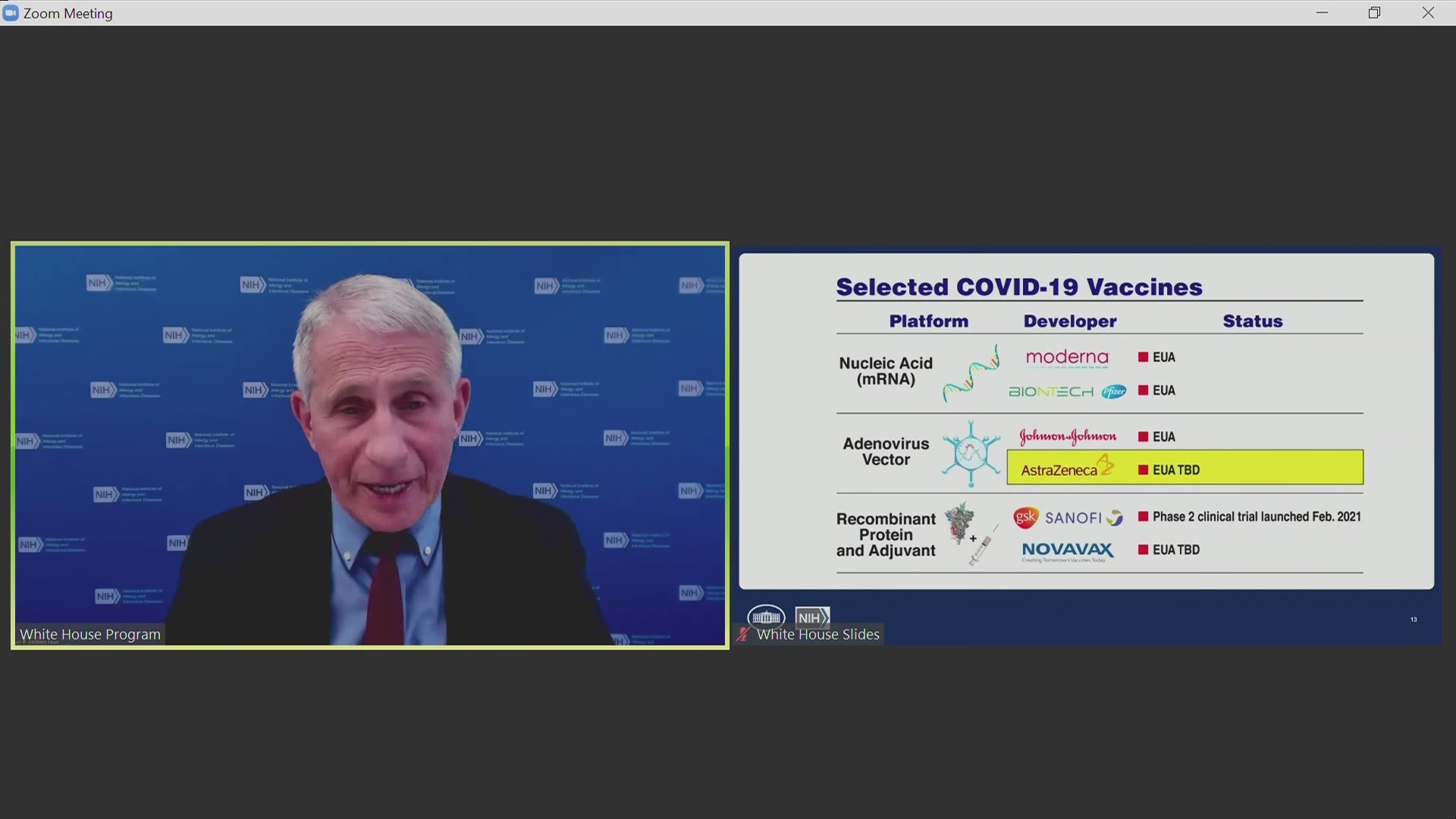 AstraZeneca reported Monday that its COVID-19 vaccine provided strong protection among adults of all ages in a long-anticipated U.S. study, a finding that could help rebuild public confidence in the shot around the world and move it a step closer to clearance in the U.S.

In the study of 30,000 people, the vaccine was 79% effective at preventing symptomatic cases of COVID-19 — including in older adults. There were no severe illnesses or hospitalizations among vaccinated volunteers, compared with five such cases in participants who received dummy shots — a small number, but consistent with findings from Britain and other countries that the vaccine protects against the worst of the disease.

AstraZeneca also said the study's independent safety monitors found no serious side effects, including no increased risk of rare blood clots like those identified in Europe, a scare that led numerous countries to briefly suspend vaccinations last week.

“I do hope it puts to bed any doubts about the vaccine efficacy,” Mene Pangalos, AstraZeneca's biopharmaceuticals research chief, told The Associated Press. “Overall where the vaccine is being used, it’s been shown to be highly effective. So I hope that the U.S. study now will continue to give the vaccine some momentum and get it used even further around the world.”

The company aims to file an application with the Food and Drug Administration in the coming weeks, and the government's outside advisers will publicly debate the evidence before the agency makes a decision. Pangalos said the vaccine could win emergency authorization toward the second half of April. If so, the company would deliver 30 million doses immediately and an additional 20 million within the first month.

What that will mean for America's vaccination plans is unclear. The Biden administration already projects there will be enough doses for all adults by the end of May thanks to increasing supplies from the makers of the three vaccines already in use in the U.S. — Pfizer, Moderna and Johnson & Johnson.

Federal officials said they didn’t want to prejudge the FDA’s review but cast the AstraZeneca findings as a victory both for the U.S. supply and the global fight against the virus.

“There are very many countries in Europe and throughout the world who have already authorized this, so the fact that a United States-run study has confirmed the efficacy and the safety of this vaccine I think is an important contribution to global health in general,” said Dr. Anthony Fauci, the top U.S. infectious disease expert.

The AstraZeneca shot, which has been authorized in more than 70 countries, is a pillar of a U.N.-backed project known as COVAX that aims to get COVID-19 vaccines to poorer countries. It has also become a key tool in European countries’ efforts to boost their sluggish vaccine rollouts. That made doubts about the shots especially worrying.

Even before the blood clot scare, scientists hoped the U.S. study would clear up some confusion about how well the vaccine really works. While previous research suggested it was effective in younger populations, there were questions about how well it protects those over 65, often those most vulnerable to COVID-19.

Also, Britain authorized the vaccine based on partial results from testing in the United Kingdom, Brazil and South Africa that suggested the shots were about 70% effective. But those results were clouded by a manufacturing mistake that led some participants to get just a half dose in their first shot.

Credit: AP
FILE - In this Sunday, March 21, 2021 file photo vial of of the AstraZeneca COVID-19 vaccine at the Guru Nanak Gurdwara Sikh temple, on the day the first Vaisakhi Vaccine Clinic is launched, in Luton, England. (AP Photo/Alberto Pezzali, File)

“The benefits of these results will mainly be for the rest of the world where confidence in the AZ vaccine has been eroded, largely by political and media comment,” he said.

Two-thirds of the volunteers in the U.S. study received the vaccine and the rest dummy shots, and Monday's report is based on the first 141 COVID-19 cases reported after the second vaccine dose kicked in. AstraZeneca declined to provide a breakdown of those cases, as it continues to prepare its FDA submission.

But Fauci said the study was careful to include different ages, racial and ethnic minorities, and people with underlying health conditions, and found “comparable efficacy across ethnicity and age.”

Dr. Paul Hunter, a professor of medicine at the University of East Anglia, said the results were reassuring but that more details are needed to back up AstraZeneca’s claims.

“But this should add confidence that the vaccine is doing what it is most needed for,” said Hunter, who was not connected to the study.

RELATED: A quick COVID-19 vaccine rollout backfired in some US states

RELATED: Half of UK adults have received first dose of COVID-19 vaccine

RELATED: VERIFY: You can contract more than one COVID-19 variant at the same time

On the safety front, France, Germany, Italy and other countries have resumed their use of the AstraZeneca vaccine after the suspension last week to investigate clots. On Thursday, the European Medicines Agency concluded the vaccine did not raise the overall risk of clots, but could not rule out that it was connected to two very rare types.

In the U.S., as in Britain and Europe, major efforts already are underway to watch for any unexpected problems as the first vaccines are rolling out. And as the U.S. considers AstraZeneca's vaccine, Fauci said, "You can rest assured that the FDA will put a great deal of scrutiny in every aspect of these data.”

The AstraZeneca shot is what scientists call a “viral vector” vaccine. The shots are made with a harmless cold virus that normally infects chimpanzees. It acts like a Trojan horse to carry genetic material from the coronavirus's spike protein into the body. That primes the immune system to fight back if the real virus comes along.