United says about 1,300 frontline employees in Houston will be impacted by furloughs. Flight attendants will bear the brunt of the cuts. 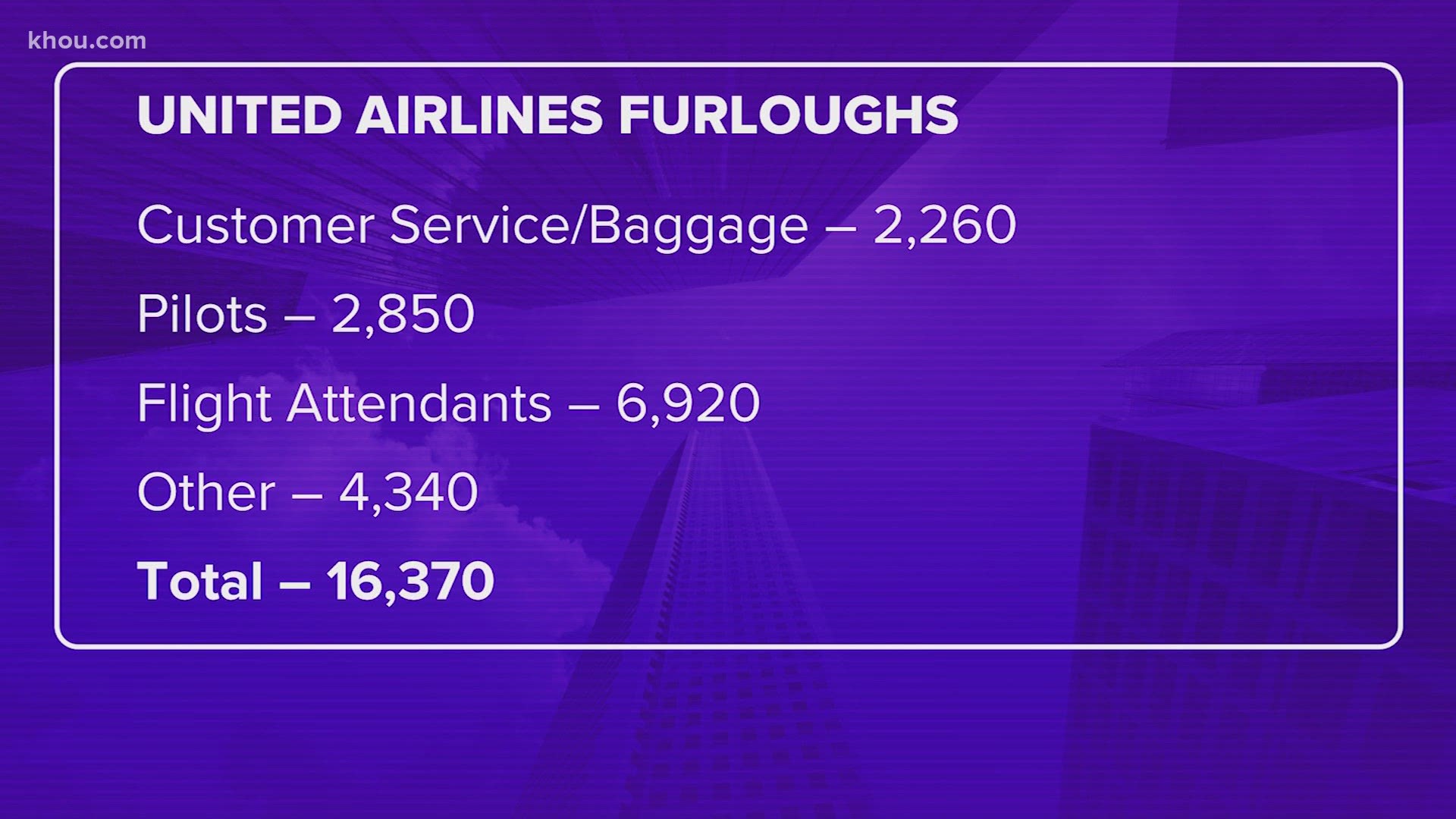 United Airlines said Wednesday it plans to furlough 16,370 employees in October with the travel industry facing a slow recovery from the pandemic.

The level of cuts are 55% lower than the number of layoff warnings that United sent to employees in July. The reduction was possible because 7,400 employees took buyouts or early retirement, and up to 20,000 more accepted reduced work schedules or took voluntary leaves lasting up to 13 months.

United Airline officials said the final number could come down further before Oct. 1, when a prohibition on furloughs ends. They said the furloughs would be postponed if Washington approves another $25 billion to help passenger airlines cover payroll costs.

RELATED: Struggling to get a flight refund or voucher? Here's some advice

Flight attendants will bear the brunt of the cuts, with 6,920 getting furlough notices. About 2,850 pilots, 2,010 maintenance workers and 1,400 management and support staff would also lose their jobs.

Local union representatives tell KHOU 11 News they're doing everything they can.

"We are doing all that we can do to save as many jobs as we possibly can. Flight attendants for more than 20 years," Elizabeth Hibbard, president of AFA Council 42, said.

"The individuals who have taken these voluntary programs will not be getting a paycheck, they will be still in the unemployment line come Oct. 1," Hibbard said.

Union representatives said the only thing that can save them now is an extension of the CARES Act.

"Without a clean extension of the payroll support program we are just going to be facing so many thousands and thousands of aviation’s employees in the unemployment line," Hibbard said.

Most union employees in the airline industry whose jobs are cut have rehiring rights - management and administrative staff generally do not. United began the year with 96,000 employees, 84% of whom were represented by unions.

United's disclosure comes after American Airlines said it expects to furlough or lay off 19,000 workers starting in October. Delta has warned nearly 2,000 pilots that they could be furloughed.

Airlines don't need all their workers because air travel has plunged during the pandemic. Even with a modest recovery since April, U.S. air travel is down about 70% from a year ago, costing the airlines billions in revenue.

The airlines have cut schedules - United's schedule this month is only 37% of its schedule in September 2019 - slashed expenses and borrowed billions to survive the pandemic.

Josh Earnest, a United senior vice president, said the Chicago-based airline doesn't expect travel to return to normal until a vaccine for COVID-19 is widely available, and that the recovery is likely to be uneven. The airline expects to recall furloughed workers piecemeal, he indicated.

“We don't have to snap everybody back at the same time,” he told reporters. “We can basically build our workforce as we need it and as our schedule grows and as demand recovers.”

Airlines that accepted federal aid to cover payrolls have been barred from furloughing or laying off workers since March. United took $5 billion in payroll cash and loans. United and other airlines and their unions are lobbying Congress and the White House for another round of payroll support that would run through next March.

Here's a copy of the full letter sent to United employees Wednesday:

"For the past several months, we have kept you updated about the devastating impact the COVID-19 pandemic has had on travel demand and on our business. Our leadership team has also been direct, honest and consistent about our plan to save our company, protect the long-term future of our employees and bounce back quickly when customer demand returns. Here are just a few components of the plan that we’ve put into action:

▪ Aggressive cost-cutting, including the reduction of executive salaries

We’ve also introduced a host of voluntary leave, early retirement and reduced hours programs, which tens of thousands of our employees have participated in to date.

In our plan to offset the impact of COVID-19 on our operation, involuntary furloughs were always a last resort.

That’s why, even when we issued 36,000 WARN notices on July 8, we said that we would do everything in our power to decrease that number “…through increased participation in new and existing voluntary programs, as well as continued discussions with our union partners about creative ways to help reduce furloughs.”

Over the past several weeks, together with our union partners, we have introduced new, creative voluntary options for our IAM, AFA, IBT and PAFCA employees, and participation in those programs has saved jobs. You can read a full summary of the creative solutions we’ve put in place so far here, and our efforts to explore other voluntary options will continue.

But unfortunately, all of our efforts so far to cut costs, raise debt and introduce voluntary options have not been enough to avoid involuntary furloughs entirely. Today, each of our operations leaders communicated directly with their teams to share the heart-wrenching news that approximately 16,000 United employees will be notified of an involuntary furlough effective as early as October 1. This includes 1,400 Management and Administrative (M&A) employees who have already been told their jobs will be eliminated at the end of this month.

Here is a breakdown by group:

The pandemic has drawn us in deeper and lasted longer than almost any expert predicted, and in an environment where travel demand is so depressed, United cannot continue with staffing levels that significantly exceed the schedule we fly. Sadly, we don’t expect demand to return to anything resembling normal until there is a widely available treatment or vaccine."