Are you numb to the numbers? A social media page aims to humanize the pandemic, putting faces behind the statistics. 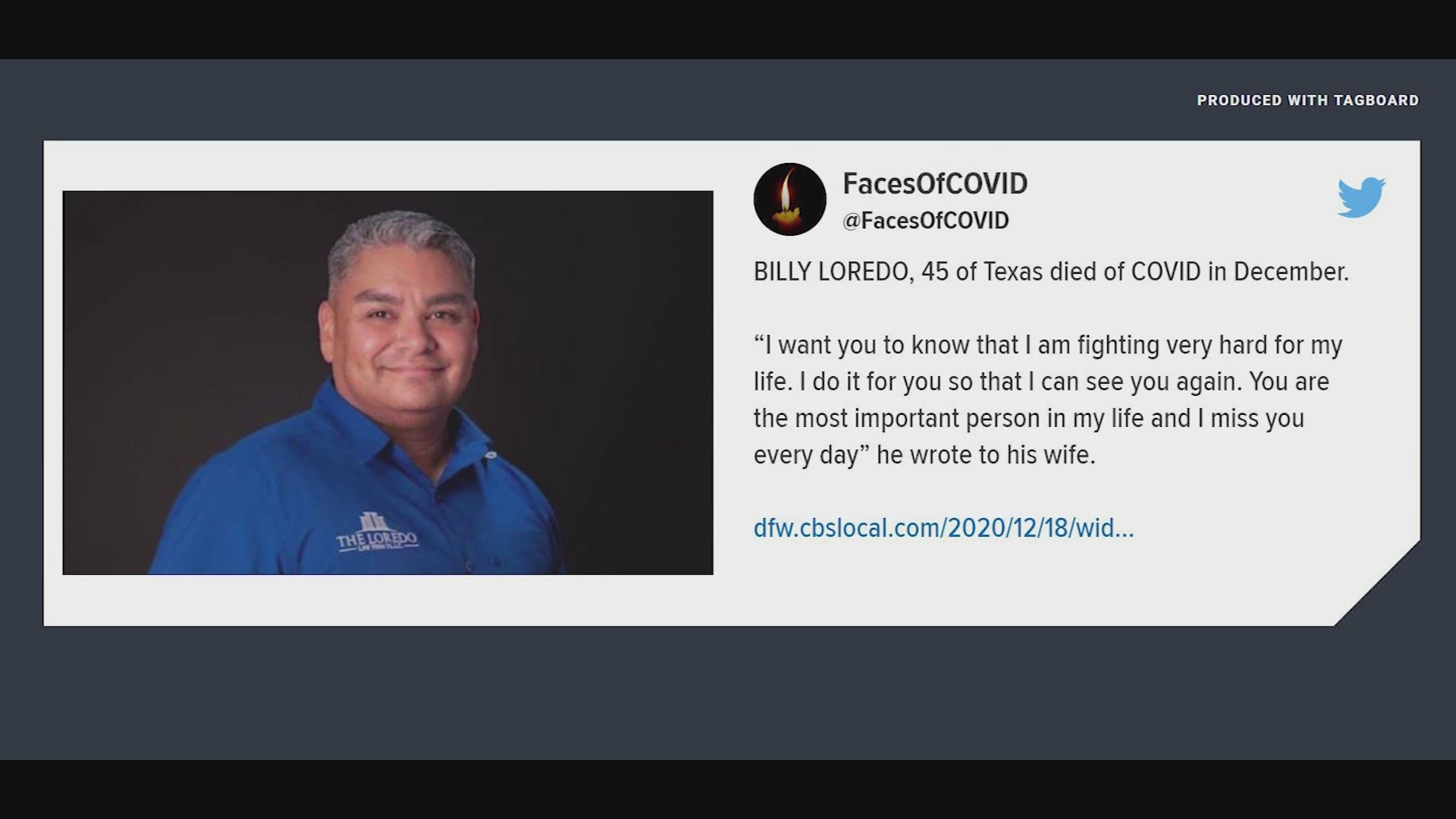 Houston hospitals are on the brink of being overwhelmed, and our healthcare workers are exhausted.

Still, many people just aren’t listening -- in Texas and across the country. That’s one reason why Alex Goldstein, a communications expert in Boston, wanted to humanize the headlines.

Back in March he started a page on Twitter, @FacesOfCovid.

Are you numb to the numbers? Houston hospitals say it won't be long before they're overwhelmed. Still, people aren't listening. @FacesOfCOVID seeks to humanize the pandemic. So many dying & grieving alone. The creator says it's a needed platform. Tune in at 10. #KHOU11 #covid19 pic.twitter.com/3fQTcxoNx6

“I was really struggling with how to process the headlines,” Goldstein said. “I think it’s important to affirm the basic dignity of the people we are losing and not reduce them to simple statistics.”

The Twitter page is a place people can submit the stories and pictures of lost loved ones, like Billy Loredo, 45, who died in December. His picture was submitted along with a quote, “I want you to know that I am fighting very hard for my life. I do it for you so that I can see you again. You are the most important person in my life and I miss you every day” Loredo wrote to his wife before his death.

“I think that people are desperate for some kind of avenue to acknowledge, beyond the four walls of their house, that something horrible has happened to them and that their loved ones had meaning," Goldstein said.

The U.S. death toll is racing towards 400,000. Every hour people are dying alone, and their families are grieving alone.

“Those are 400,000 people who had stories. They had families and loved ones," Goldstein said.

Goldstein said the faces on his page show the range of people impacted by the virus.

“People who are perfectly healthy to people who are elderly and infirm, it has not spared anybody," Goldstein said. “Part of what @FacesOfCovid is trying to do is make this real for everyone.”

In a time where so many seem numb to the numbers, Goldstein hopes @FacesOfCovid helps humanize the pandemic.

“We are asking people to show up and do the right thing for people we don’t know. That’s the kind of country I want to live in, and I think most people do, too," Goldstein said.