Concerned families say it’s not COVID but the isolation from the shelter in place order that is killing Georgians in many facilities. 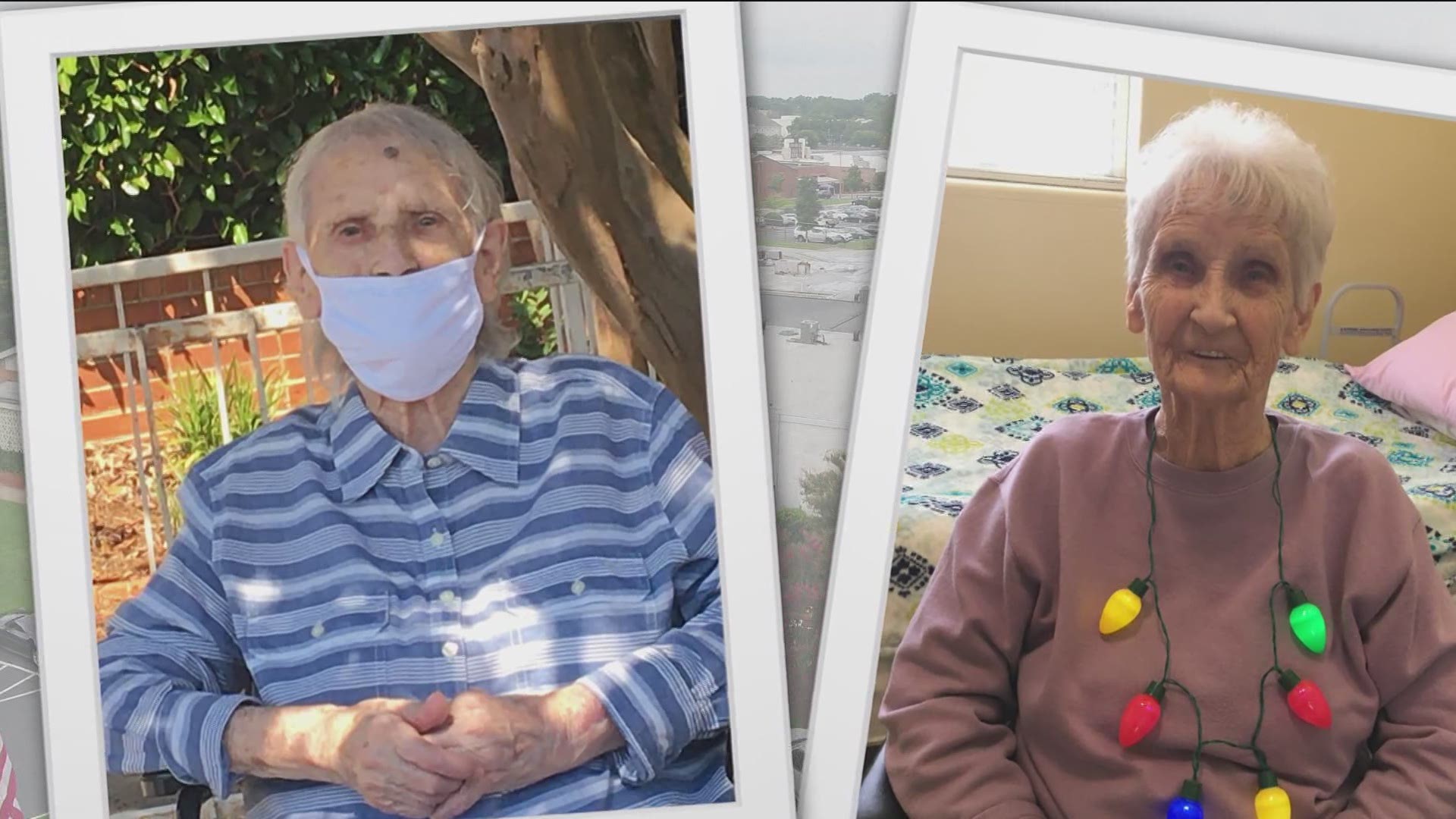 ATLANTA — Mary Phipps looks at two pictures of her 96-year-old mother and fights the urge to cry.

One shows her mother in December 2019, before COVID triggered the shelter in place order that shut down long term care facilities to visitors.

The other picture shows her mother now. It was taken during a drive-by visit. That’s when loved ones wave from their car at the residents lined up outside. Visitors can’t get out of the vehicle or stop for long. It’s just a chance to say hello, blow a few kisses, snap a photo and leave.

“I see my mother. And then I see a stranger. I mean, I just, I can't stand to see her like that. It's just, that's not my mother,” Phipps said with a long, reflective pause.

It’s been six months since Phipps has been able to give her mother a hug. It’s a big change considering she and other family members used to visit three or four times a week.

11Alive spoke with Phipps just feet away from the nursing home where her mother lives in Cartersville.

Phipps has tried to visit her mom at the window, but now it’s too high and covered by a bush. Even in her last room, her mom couldn’t hold the phone and keep herself up.

“I said, 'Momma, just lay the phone down and we can just look at each other',” she said.

Phipps said that, right now, it’s not COVID but the isolation from the shelter in place order that is killing her mother. Not only is she unable to visit, but residents don’t even get to see each other. At most long-term care facilities in Georgia, the activities are canceled and the dining halls remain closed.

The pictures of Phipps’ mother have sparked outrage, calling the isolation cruel, heartless, and a form of abuse. It prompted families to share pictures of their own loved ones, some who have already died, others still fighting the loneliness.

Marcy Scroggs posted pictures of her mother, who has dementia. She said her mom fears she will forget her family before she gets the chance to see them again. It’s a thought Scroggs can hardly bear.

Maxine Williams is confident her mother is getting great care. Still, even she’s noticed a difference. That’s why, in July, she formed Georgia Caregivers for Compromise - a group with nearly 800 members.

“I felt like we needed a different approach than being totally isolated so I started writing Governor Kemp,” Williams said.

Williams has written several letters, in them asking for a plan to end the “prolonged physical separation.” She's given deadlines hoping that would help but they’ve all come and gone, and Williams says she’s seen no action.

The Department of Public Health said it is working on a plan of re-entry, but given the vulnerable population involved, said it won’t rush the process.

Williams fears the state and the nursing homes themselves are worried about the liability.

“If you're not going to do something, if you won't let anyone else come up with a solution, then you are the liability,” she said.

There are reasons for concern. Eighty-four percent of those that have died in Georgia with the virus were over the age of 60. Thirty-nine-percent were living in long term care facilities.

“They feel like they've been left to die alone. And the unfortunate part is they are dying alone. They are literally dying alone,” said Williams.

In the responses her group has received, the Governor points the finger back at the private sector. The DPH said the current shelter in place and executive order prohibit indoor visitations.

“We still have high rates of disease that I don't believe is safe to have in-room visitation,” said Dr. Kathleen Toomey, the head of the public health department in charge of the state’s COVID response.

But she added that outdoor visits are fine and that long-term care facilities choosing not to conduct them, are making that call on their own.

The Georgia Health Care Association said that’s an unfair burden to put on the industry, especially with active COVID cases in nearly a quarter of Georgia’s long term care facilities and more than 60 counties with a positivity rate above 10 percent. There simply isn’t enough staff to coordinate and supervise visits.

Late in August, Florida’s governor announced plans to ease restrictions on visitation at any facility that had gone 14 days without a positive case.

At the time, nearly 7,000 or about two-percent of Florida’s residents and staff were positive for the virus. It’s about half the number of cases the month prior.

Georgia’s rate of infection is higher. At the end of August, about 3.7 percent of residents were actively fighting COVID and there’s no current measure of staff.

Still, Georgia Caregivers for Compromise pointed out that many facilities haven’t had an active case in weeks and believe it is time to start allowing more visitors – inside or out.

Phipps said something needs to change and fast. She calls her mom every day, but it’s not the same.

“Every day it's - it's very heartbreaking,” she said.