Third round of coronavirus evacuees on their way to San Antonio

Officials say there are about 3,500 people stuck on the Grand Princess cruise ship off the coast of California, and some of them are coming to San Antonio. 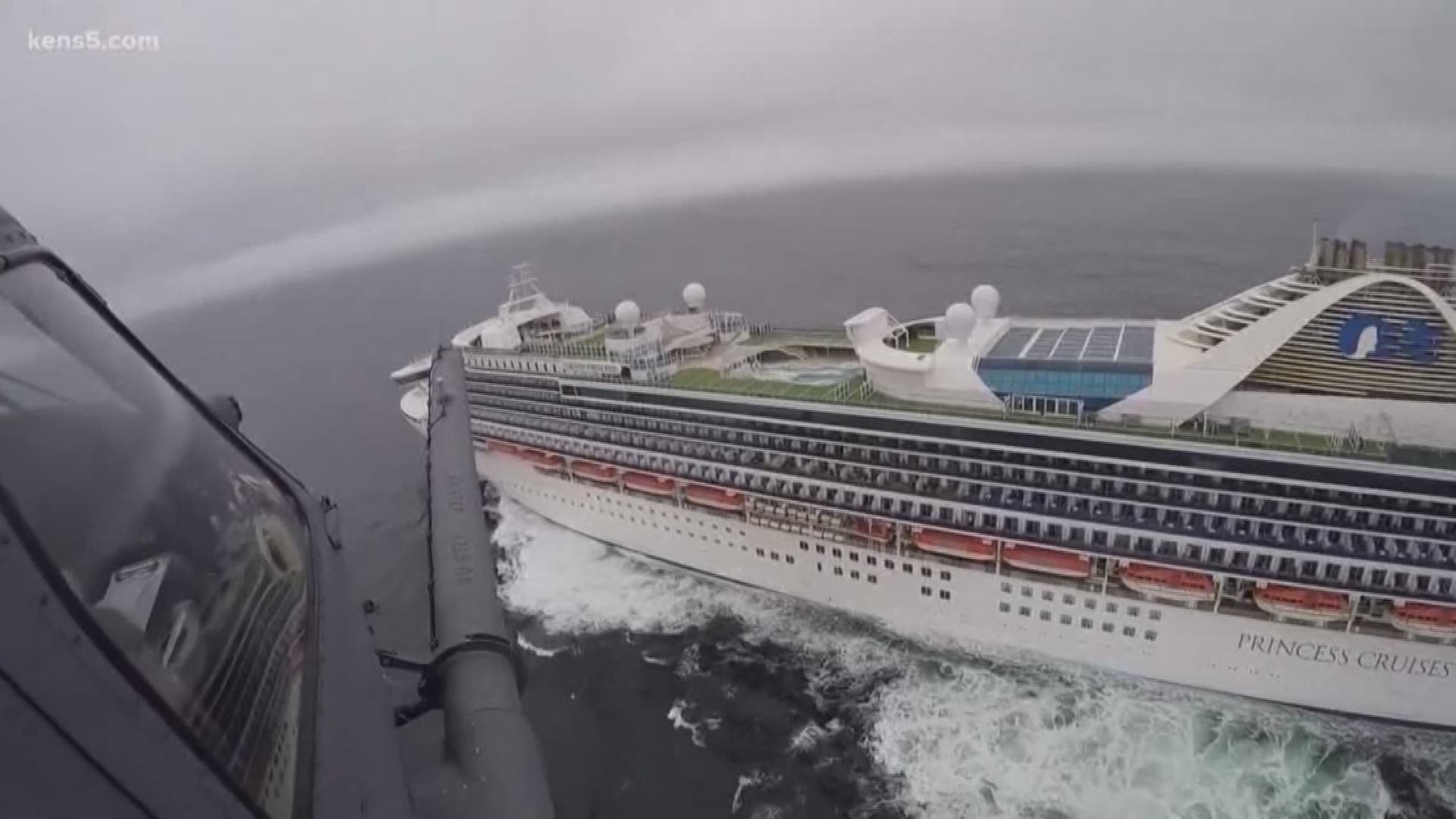 SAN ANTONIO — San Antonio is about to get a third round of coronavirus evacuees.

According to health officials, there are about 3,500 people on the Grand Princess cruise ship off the coast of California.

Mayor Ron Nirenberg isn't sure how many evacuees we're supposed to get just yet. He said 90 people on the ship are from Texas.

"What we have been told, is that only Texans and anyone from adjoining states would be brought here," Nirenberg said. "Federal officials have said they would only send passengers who are asymptomatic and that all passengers would be tested."

Nirenberg said they also haven't been given an exact arrival time, but it could be as early as Monday night.

Last week, Nirenberg declared a "local state of disaster and a public health emergency" over concerns about the potential spread of coronavirus. This happened after a patient who tested positive for the coronavirus was released and visited North Star Mall.

Since the incident, the CDC has changed its standards.

"They've changed testing protocol to ensure there are two consecutive negative tests 24 hours apart and significantly, there are no pending tests before anyone is released," Nirenberg said.

The declaration expired on Monday. At this point, Nirenberg doesn't plan to renew it.

"I reserve the right to renew it, if necessary, but right now we're getting good coordination with our federal officials to make sure we don't see a repeat of what happened last week."

Nirenberg said they continue to demand transparency from the U.S. Department of Health and Human Services (HHS), the Centers for Disease Control and Prevention (CDC) and other federal and state officials. He and Bexar County Judge Nelson Wolff are still pushing to keep evacuees on base until they need medical care elsewhere.

"This is a federal operation, we want them to keep it on federal ground using federal resources as much as possible," Nirenberg said. "If a quarantine is done successfully, that will keep any exposure from the public."

In previous protocol, they were able to keep asymptomatic evacuees on the base. Nirenberg said they've received cooperation from Governor Greg Abbott the Texas Center for Infectious Diseases, to move people off who needed to be treated, but not put them in local hospitals.

"That's the current protocol as it stands, but we're also asking for additional support in our conversations with this particular cohort of evacuees," Nirenberg said. "We've been assured by HHS that we would get those protocols in writing before anybody boards a plane here."

Nirenberg said the CDC has sent 75 community test kits to San Antonio. He said more are expected to arrive this week. These kits will be handled by the San Antonio Metropolitan Health District. The CDC handles the separate test kits used on evacuees.

"Texas, all our cities, but especially San Antonio, needs a heck of a lot more testing and we're requesting that ASAP," Nirenberg said.

At the end of the day, the decision to bring coronavirus evacuees to San Antonio was made by the federal government. Nirenberg said they are handling the situation as best they can.

"This is a fluid situation. If I put myself in the shoes of those neighbors who want to come home, who deserve to come home, I think they ought to come home," Nirenberg said. "We're trying to do that in a safe and compassionate manner, but also ensure that the public is not exposed."

Nirenberg said this is the most notice they've been given as far as receiving evacuees. There's no telling if this will be the last round to come through San Antonio.

"We'll continue to conduct our mission compassionately with the utmost protection and safety of the public," Nirenberg said. "We will continue to do all we can to protect our community here in San Antonio."

Judge Nelson Wolff wasn't available for an interview, but sent out the following statement:

"Over the weekend Mayor Nirenberg and I have been in communication with the Governor's office, our congressional delegation, and the White House regarding evacuees from the Grand Princess cruise ship who will be brought to Lackland Air Force Base. Although these evacuees have not exhibited any symptoms, our utmost priority is the health and safety of Bexar County residents. "

President Trump, Vice President Mike Pence and other administration officials spoke at a press conference after a meeting of the coronavirus task force. Several officials spoke about the Grand Princess cruise ship passengers.

"Everyone will be medically screened before they get off," said Dr. Bob Kadlec, Health & Human Services Assistant Secretary for Preparedness & Response. "If there is any question about their physical health they will be screened again."

“An ill-prepared Trump Administration is apparently flying many untested cruise ship evacuees to San Antonio without an adequate plan on where to place those who test positive," the statement said. "Any who test positive will not be allowed to stay at Lackland. Nor has any provision been made for additional protective gear for health care professionals. This is an unacceptable situation, which we are trying to overcome.”