Want a coronavirus test in Texas? You may have to wait for hours in a car

Texans report problems with almost every facet of the testing process, starting with the glitching websites and unanswered phone lines used to schedule appointments. 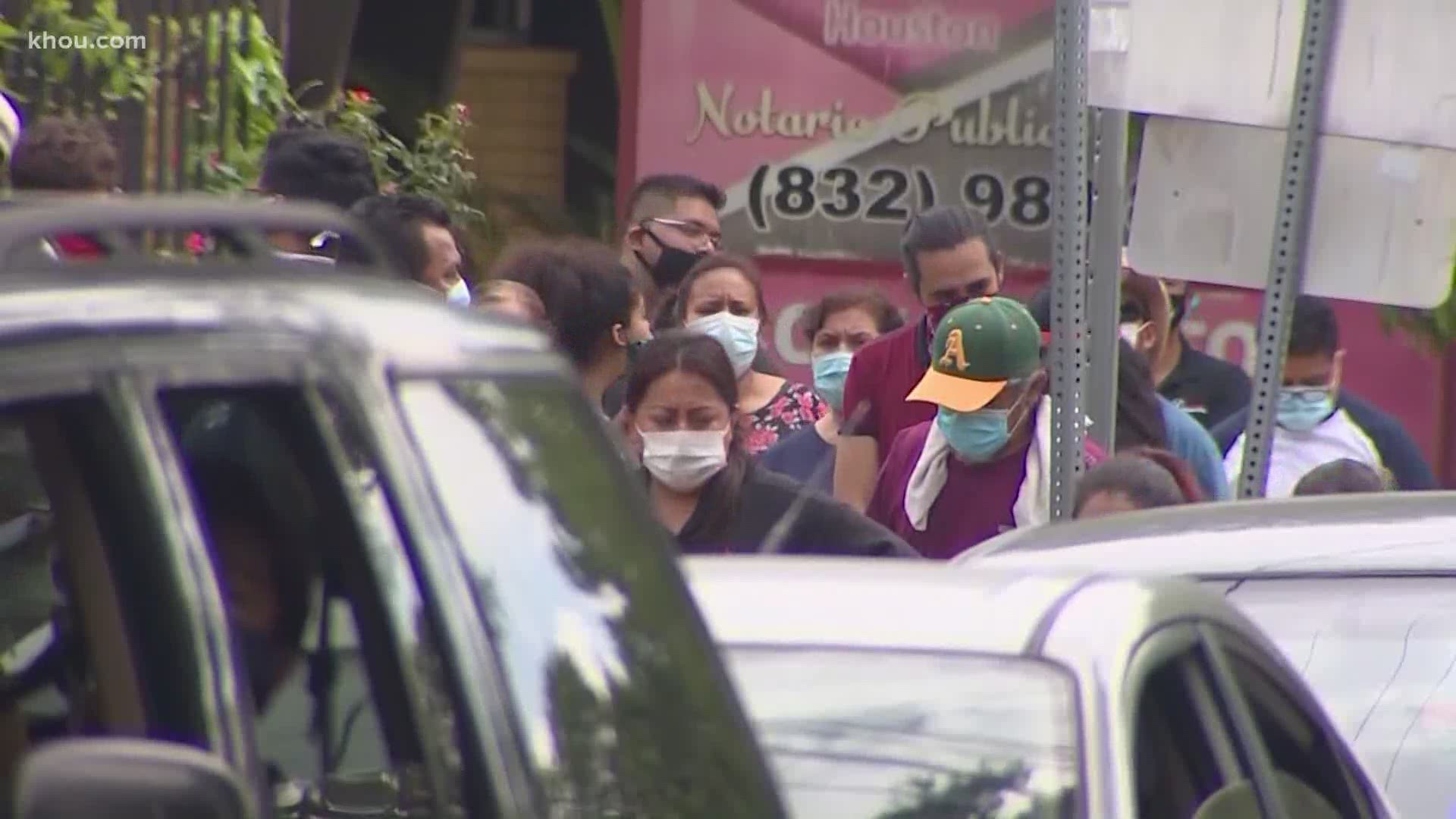 By 8 a.m. Friday, the line of cars waiting at an Austin coronavirus test site snaked out of the parking lot and down the street.

The night before, Emi Zuniga waited hours to get her nose swabbed at a test site in San Antonio.

And in South Central Texas, a network of urgent care clinics has greeted callers with the automated warning that an “unprecedented” number of people want to be tested.

Four months into the pandemic, demand for coronavirus tests is soaring, as protests, the opening of the Texas economy and a resurgence of cases sends nervous residents searching to confirm that they’re virus-free. Problems beset almost every stage of the testing process, starting with the glitching websites and unanswered phone lines used to schedule appointments, and extending to long lags before test results come back.

It wasn’t supposed to be this way. A late April report from Gov. Greg Abbott said "testing is the foundation on which the plan to open Texas is built."

But problems persist, hampering the state’s ability to slow the spread of the virus and identify people who need to isolate.

Zuniga tried to register for a test at CVS, which is providing free self-swab exams in partnership with the government, after learning she and her daughter might have been exposed to the virus. The website kept crashing and she turned instead to a local clinic.

Her daughter got a test appointment earlier this week. They sat waiting for what felt like “forever,” Zuniga says, two or three hours.

It’s not an uncommon experience.

Across the state, test sites are hitting capacity and closing early, and Texans are waiting in hours-long lines to get swabbed.

“Have we been having an uptick? Absolutely,” said Elizabeth Perez, a spokesperson for Harris County Public Health. Testing capacity is “maxing out” every day, she said, with scheduled test slots often claimed by 9 a.m.

Experts and health officials attribute the wait times to systemic issues that have tripped up the state’s testing efforts from the get-go, including a shortage of supplies and an underfunded public health system. That’s coupled with surging demand that some health care organizations say is due to the spread of the virus, employees returning to work and more people being tested in nursing homes, prisons or before medical procedures. Plans for outdoor testing have also been foiled by weather.

In some places, the results are plain to see. Part of the state’s online test hub has been disabled, and the site says the wait time for phone calls can exceed 30 minutes because of “excessive request volume.”

Outside testing locations in several cities, stretching lines have become a common sight.

Andrea Rosales, an Austin resident, waited nearly three hours in the car with her young son, who had been in contact with someone with the virus.

Officials were counting the cars and cut off the line behind her. Still, the queue moved slowly, she said. Her son became hungry. She had to use the restroom. A car in front of them broke down.

“I’m just like, “‘Oh my God, we should have [eaten] lunch or something,’ she said. “I just didn't think it was going to take that long.”

A testing location in San Patricio County, on the Gulf Coast, closed early Friday after reaching capacity in the morning.

In remote Alpine in West Texas, people queued up for four hours last weekend waiting for a state-run unit to perform tests.

And in San Antonio, a public test site was booked solid for days last week, and a registration system where people could sign up for appointments was temporarily shut down.

Galileo Gonzalez was able to get tested at a San Antonio clinic earlier this month. But the “ordeal was crazy,” he said; he had to phone the public health hotline for an appointment more than 50 times because the line kept dropping.

Gonzalez wanted to get screened after attending a large protest against police brutality. “It was ridiculous how hard it is to get a test,” he said. His results came back negative nine days later.

Clinics and public health authorities are being challenged by the increased demand for tests.

Austin Regional Clinic has recently notified patients that the turnaround time for tests has lengthened, with patients sometimes waiting for five to 10 days. Quest Diagnostics, a lab behemoth, said it’s seeing “record demand,” and that orders for its diagnostic tests have increased by about 50% over the past three weeks.

In Lubbock, University Medical Center is shutting down its drive-up test site because the laboratory it works with is “critically low on supplies” and has to save them for hospitals. A spokesperson for the center said it had seen demand for the testing go up “tremendously,” and that the number of tests coming back positive had also risen. Increased coronavirus infections have prompted worry that urban hospitals could “become overwhelmed” with patients, a news release from the Lubbock medical center says.

Diana Cervantes, director of the epidemiology program and an assistant professor at the University of North Texas Health Science Center in Fort Worth, said testing delays hamper efforts to quickly identify, test and quarantine people who have been in contact with an infected person.

“That's how we really are going to break these chains of infection,” Cervantes said. That’s the “end goal" of testing and contact tracing.

The way labs report information back to health departments can prolong the wait times, she said. There might be days’ worth of test results dumped all at once, and smaller facilities might send results via fax machine, further slowing things down.

“With Texas there has been a huge delay in improving that notifiable disease condition surveillance system and updating the way that their surveillance system works,” she said. “It’s been an ongoing issue that whenever you have these types of events — and something as huge as the pandemic — it’s going to bottleneck everything.”

Purchase orders from the Texas Division of Emergency Management show the agency has sought to buy tests from entities including University Hospital in San Antonio, the University of Texas Rio Grande Valley and Clinical Pathology Laboratories, at a total cost of millions of dollars. There have been shortages of test-related supplies in Texas and across the country.

It also has placed several orders with companies like Beysa Safety Solutions Inc. for viral transport medium and swabs that are used to collect or move the test samples.

(It’s unclear if all of the TDEM purchase orders, which are paid for or reimbursed with federal dollars, have been fulfilled. The state does not pay until an order has been delivered and passed a quality assurance exam, a TDEM spokesperson has said.)

In the meantime, Texans like Zuniga are trying to navigate the state’s strained testing infrastructure while balancing other demands brought on by the pandemic, like working from home.

“I’m making my lessons and PowerPoints,” said Zuniga. “But while I'm doing that, I am on hold and I'm being told, ‘Oh please wait,’ ‘No call here,’ ‘No call there,’ ‘No we're full.’ Or having to stop so I can try to log in online to see if I can try to register for a test. It was so frustrating because I felt like I kept hitting a wall.”

Zuniga was finally able to get a test Thursday night. She had a late afternoon appointment. She was tested around 8 p.m.

This article was originally published on the Texas Tribune website.