The facility said the Camellia at Deerwood independent living resident was taken to Memorial Hospital where it was confirmed that resident had COVID-19.

Management at a Deerwood retirement community has confirmed to First Coast News that a resident tested positive for the coronavirus.

The Camellia at Deerwood Assisted Living Facility located at 10061 Sweetwater Pkwy. said in a part that:

The individual who has now been diagnosed as confirmed positive for COVID-19 after transport to and testing at Memorial Hospital is a Camellia at Deerwood independent living resident.

The facility said the patient and his family retain control over and responsibility for his care decisions. Because the resident was not an assisted living resident when the family requested that a Camellia at Deerwood associate place a 911 call on their behalf, they did.

They went on to say that the associate communicated the symptoms that the family provided, which ranged from gastrointestinal to respiratory symptoms. The facility said they understand that first responders and medical professionals are trained in how to respond to various scenarios, and they "take [their] charge seriously to assist them by sharing any and all available information," and that was done in this case.

The full release by the Camellia at Deerwood Assisted Living Facility can be read below. 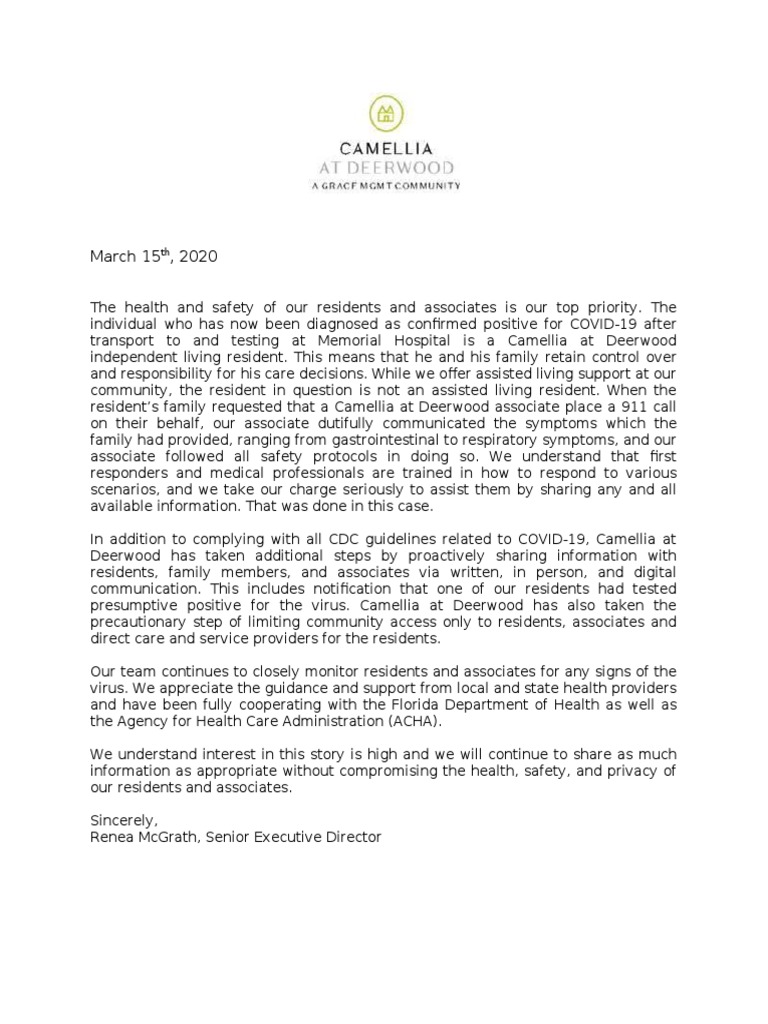 Updated Camellia at Deerwood Response to COVID-19
The health and safety of our residents and associates is our top priority. Theindividual who has now been diagnosed as confirmed positive for COVID-19 aftertransport to and testing at Memorial Hospital is a Camellia at Deerwoodindependent living resident. This means that he and his family retain control overand responsibility for his care decisions.

On Thursday night, The Florida Department of Health said an 83-year-old Duval County man had tested positive for COVID-19 and it was not yet clear if it was a travel-related case. The man was said to remain in isolation until cleared by public health officials.

On Friday, Memorial Hospital in Jacksonville said it was treating a patient that tested positive for COVID-19. Memorial said the patient was in isolation at the time of testing and will remain there as they are treated.

That same day, Jacksonville Mayor Lenny Curry and Jacksonville Fire and Rescue Department Chief Powers spoke about a patient that was transported from an assisted living facility near the Town Center area that ended up testing positive for COVID-19.

Mayor Curry expressed frustrations with the Florida Department of Health's lack of information which unnecessarily exposed five first responders to an infected patient, requiring them to be quarantined.

“Last night when first responders arrived on the scene, they had no indication the patient was possibly infected with COVID-19,” he said. “Since the first responders were exposed without personal protective equipment, all five are now in quarantine.”

He continued, “Without having consistent information as to how many people are monitored, tested or need to be tested, I have to act unilaterally, perhaps with actions that may be criticized later.”

The mayor was asked about the fact that he wasn’t informed before the case was announced. “I just want information. I want information so I can make decisions with that information," he said, "...And I want to be able to share that info with the public.”

RELATED: 1 in Duval County, 1 in Clay County confirmed to have coronavirus