What went wrong? Mayor Turner talks to KHOU 11 about the coronavirus crisis in Houston

Houston Mayor Sylvester Turner opened up to KHOU 11's Mia Gradney about the state of the city during the coronavirus pandemic. 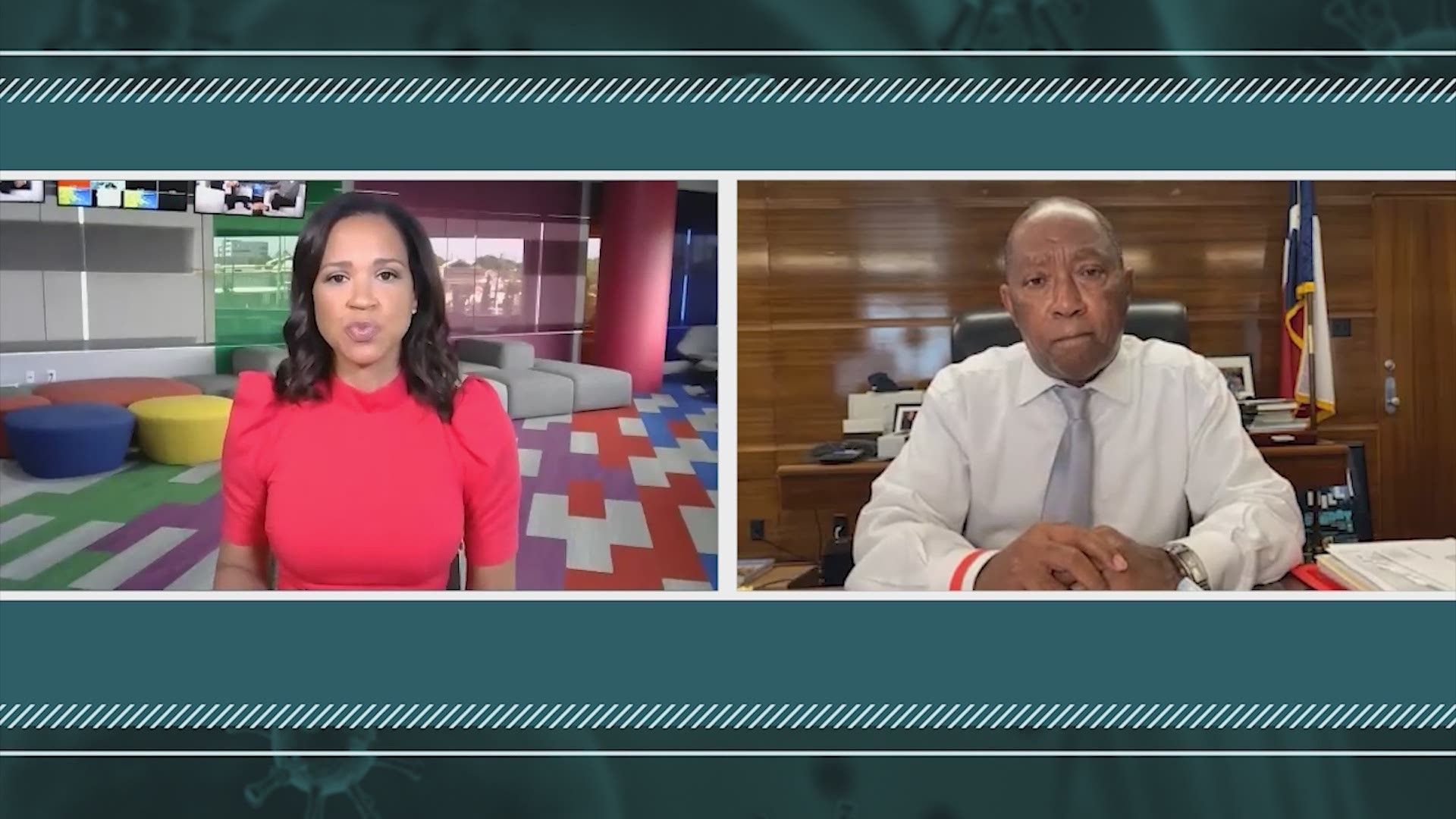 HOUSTON — In a one-on-one interview with KHOU's Mia Gradney, Houston Mayor Sylvester Turner doubled-down on his call for another shutdown due to the coronavirus pandemic. He said the city of Houston needs it in order to slow the spread of COVID-19, which Turner says is "running rampant" in the community.

"The reality is that the virus is running rampant. It is not controlled. We are chasing the virus and then we're talking about heading to school, say, next month," Turner said. "I think we need to dial things back. ... we're dealing with a forest fire."

Turner said the city is doing everything it can to control the spread, but the great results Houston was seeing in March and April were basically negated when the state reopened.

"We started to open up ... as quickly as we did ... we started to have social lives and we saw it coming back together again. It was like we intentionally poured fuel on a fire that was not out and it just took off. And now, we're dealing with a forest fire," Turner said.

Turner said the virus feeds on groups of people and he's worried about the space in Houston hospitals, saying he doesn't want to see them overwhelmed, whether it be with COVID-19 patients or people with other ailments. He said even with another lockdown, the city wouldn't see the results of the lockdown until weeks later due to lag time in case reporting. He said the time to act is now.

"Whatever steps you put in place today ... for example, if you start wearing a mask or even if you go to a stay-home order (now), you won't see the impact, the positive impacts, of that action for another three to four weeks because you have that lag time," Turner said. "The sooner you move in a proactive way to stop this virus, the better it is for everyone."

Turner stressed the fact that his intentions are not to slow the economy, but rather to save lives and keep people from being infected. He noted people have already sacrificed a lot during the pandemic, but the loss of life is a number that is very troubling.

"I think we owe it to ourselves to put us in the best position to save as many lives and to keep as many people from getting sick," Turner said. "The number of people who have died in the City of Houston is a little over 300. We're the fourth-largest city in the United States. Those are good numbers. But now we are dealing with a virus that has run out of control. ... The virus never went away in this city. We just managed it extremely well, but it never went away."

"And the answer is yes (we need more staffing at Houston hospitals). As long as more people are going into our hospitals and more people are going. ... You bet. And we have to build capacity," Turner said. "It's not just a question of bed capacity. It's also a question of having the nurses and the medical support staff that's needed. So the answer is yes."

Turner said he hopes for the best when thinking about the future. When Gradney asked him what he thinks it will be like in two weeks, Turner said that he's hoping to see a flattening of the curve, as long as everyone follows the social distancing guidelines.

Turner said he doesn't have the power to shut the city down on his own. That call has to come from the state. He said the city continues to do everything in its power to slow the spread. Gov. Greg Abbott continues to say that if Texans follow the orders that are in place, another shutdown will not be necessary.

"Our authority has been restricted. We are doing everything right now that we are allowed to do. ... If it's going to be, for example, a two-week stay-home order put in place. We can't do that without the state," Turner said. "But in the meantime, we've got to do everything within our power. We just have to do it better."

RELATED: What happens in July will determine how Houston will handle reopening schools next month