The mandatory order issued by Harris County Judge Lina Hidalgo follows those of other metro areas, but some Texas judges claim it’s not allowed under state law. 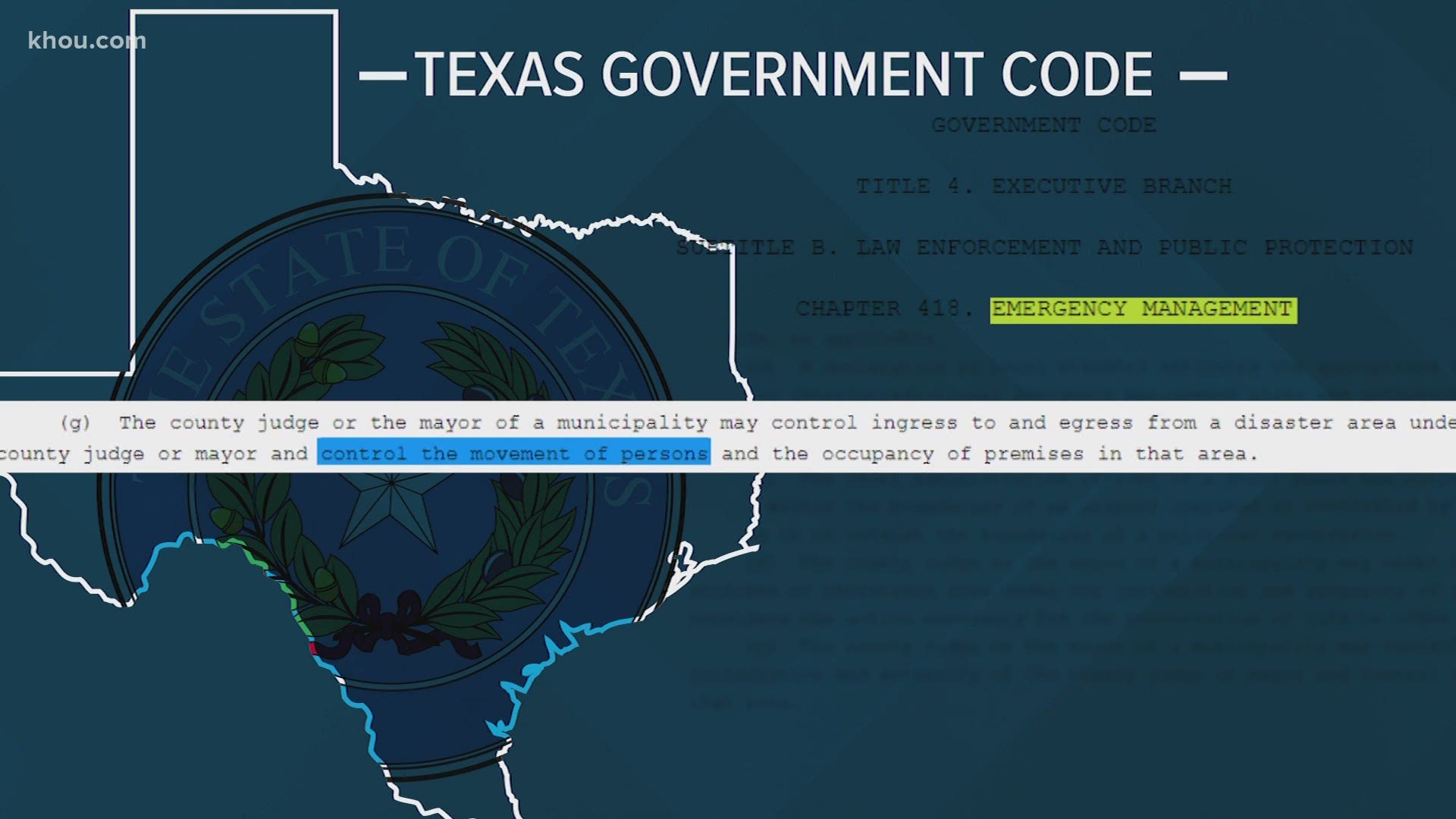 HOUSTON — It’s become a polarizing issue about citizen rights and the government’s reach, with public health and safety stuck in the middle.

The mandatory face-covering order issued by Harris County Judge Lina Hidalgo follows those of other metro areas, but some Texas judges claim it’s flat out not allowed under state law.

“I do not find a statutory or legal basis that would allow me or anyone else in government to issue an order requiring citizens to wear a mask in public,” Montgomery County Jude Mike Keough posted on his official Facebook page.

“My general counsel was crystal clear,” said Galveston County Judge Mark Henry. “It's unconstitutional and you will get you sued.”

RELATED: Risk a $1,000 fine if you don't cover your face in public in Houston, Harris County

RELATED: 'Liberty and freedom' | Other counties say they will not require masks like Harris County, Houston

“I think the law is pretty clear. It’s just a literal reading of the law and it says what it says,” said First Assistant County Attorney Robert Soard. “Now they may disagree with the policy and that’s certainly the privilege that other elected officials have, but it doesn’t change the law."

Chapter 418 of the Texas Government  Code deals with emergency management. It designates a county judge is as the emergency management director of their jurisdiction and gives the judge “the powers granted to the governor under this chapter on an appropriate local scale.”

Under the declaration of a local disaster, the county judge or a mayor of a municipality may “control the movement of persons.”

“Our view is if you can tell somebody they need to stay in their house, or tell them they cannot go into a certain building you can also put reasonable regulations on that movement,” Soard said.

He claims mandatory face coverings are legal. But that interpretation has gotten governments sued, from the Connecticut governor to San Bernardino County commissioners in California.

“She has no authority to do this whatsoever under the Texas constitution,” said conservative activist Dr. Steven Hotze.

Hotze filed a lawsuit seeking a temporary restraining order and injunction to block Hidalgo’s order, which is set to take effect Monday.

The petition claims Hidalgo has exceeded her authority by issuing more restrictive orders than Governor Greg Abbott, who has not issued a directive for face coverings in Texas. It also argues that the directive deprives Texans of “liberty and freedom” under the state’s constitution.

"The rights we enjoy under the Texas Constitution are being trampled on by Judge Hidalgo, while millions of individuals have lost their jobs and thousands of businesses are on the brink of bankruptcy," Hotze’s attorney Jared Woodfill said in the lawsuit.

Woodfill and Hotze organized a group of more than 200 protesters downtown Thursday to voice their opposition to the order.

“That’s people’s rights. I respect them,” Mayor Sylvester Turner said. “Sometimes they speak favorably about you, sometimes they don’t.”

As for policing the directive, both Harris County Sheriff Ed Gonzalez and Houston Police Art Acevedo said their deputies and officers will be taking an educational approach to enforcement seeking voluntary compliance. Acevedo added that citations would only be written “as a last resort.”