Here is a look at the latest COVID-19 headlines from around Houston, Texas, and the world for Friday, March 13. 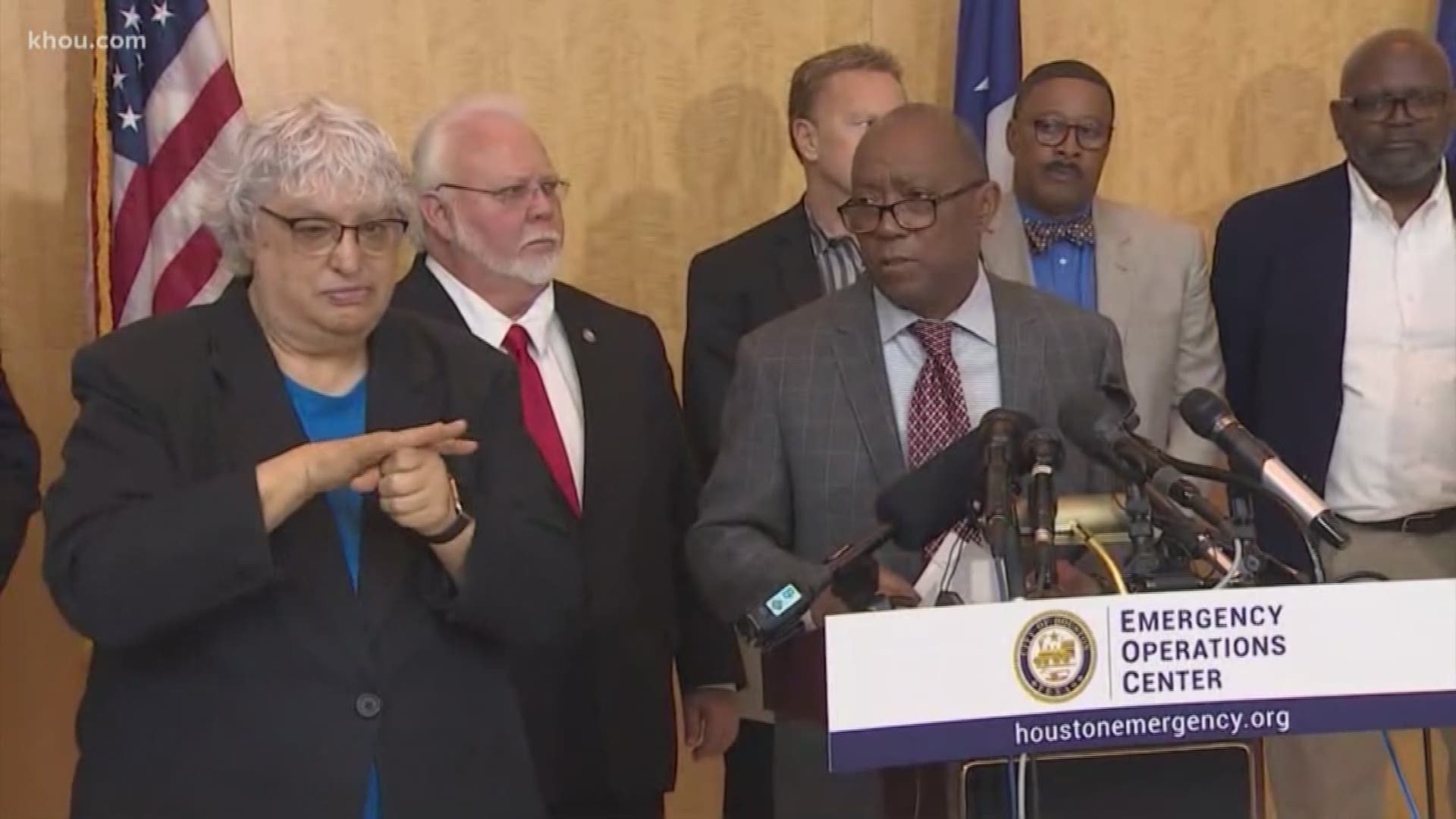 HOUSTON — We are continuing to track the latest headlines and updates regarding the global coronavirus (COVID-19) pandemic.

President Donald Trump has declared coronavirus, also known as COVID-19, a national emergency. Gov. Greg Abbott on Friday declared it a statewide public health disaster as the virus continues to spread. Read more in the live updates below.

Scroll down for today's other top headlines and the latest updates in our live blog.

Here are the latest updates from around the Houston area and the world (all times are Central/Houston time):

MARCH 13 8:42 p.m. — A Patton Village police officer who tested presumptive positive for coronavirus is in critical condition, according to officials.

The man, who is in his 40s, is still currently hospitalized. He was confirmed at the first presumptive positive COVID-19 case in Montgomery County.

MARCH 13 5:30 p.m. — Mayor Sylvester Turner gave an update on the city's coronavirus response, saying expanded testing is expected to begin in Houston next week. Health department officials said their lab has capacity to test an estimated 600 people, a two-fold increase in capacity since local testing on March 4. Read more here.

MARCH 13 5:28 p.m. — Houston Zoo will be temporarily closed starting March 13 at 7 p.m. and will not reopen until April 3. Click here for more details.

The case is a woman, age 70 to 80, who is experiencing mild symptoms and is quarantined at home. Health officials said she recently traveled to Egypt.

Officials said the three cases are:

MARCH 13 2:57 p.m. — All visitations at the Brazoria County Sheriff's Office Jail are suspended until further notice.

Trump said it would free up to $50 billion for state and local governments to respond to the outbreak.

MARCH 13 12:55 p.m. — To prevent the potential spread, the visitation to Harris County Jail will be suspended until further notice. The measures are being put into effect to protect our staff and inmates. The suspension will be effective, Saturday, March 14, 2020. Attorney-client interviews and other essential visits will not be affected. In order to assure family and friends are being able to communicate with their love ones, a free calling program will be implemented for our facilities. Read more here.

MARCH 13 12:15 p.m — Texas Gov. Abbott has declared a statewide public health disaster for all Texas counties in response to COVID-19. This declaration will authorize the use of all resources needed to respond to COVID-19. The Department of State and Public Health is leading this response, the governor added. In addition, the governor said the state is waiving costs for people who need to be tested for COVID-19. According to Abbott, if an uninsured person needs testing for coronavirus, there are two options: public and private health testing. Read more here. Watch his press conference here

MARCH 13 12:10 p.m. — RCS Carnival Group, which is one of the main food vendors for the Houston Livestock and Rodeo Show, is donating produce, bread, meats and other unused food to the Houston Food Bank. Read more here.

MARCH 13 11:34 a.m. — "Galveston County Health District today confirmed its first presumptive positive case of Coronavirus Disease 2019 (COVID-19) in a Galveston County resident." The woman is not in Galveston, however. She's being treated in Austin and is linked to the Montgomery County case. Read more here | View list of Houston-area cases

MARCH 13 11:06 a.m. — Spain's prime minister has announced a two-week state of emergency from Saturday in a bid to contain the new coronavirus outbreak, the Associated Press reports. The measure gives the government extraordinary powers, including the possibility to mobilize the armed forces, to confront the COVID-19 outbreak.

MARCH 13 11:02 a.m. — President Trump has scheduled a 2 p.m. press conference (Houston time) to address the coronavirus. There are multiple reports, including from Bloomberg News, that the president will declare a national emergency to speed up the virus response. Check back for updates and read more here.

MARCH 13 10:48 a.m. — NASCAR has postponed all racing events for the next two weeks, including races at Atlanta Motor Speedway and Homestead-Miami Speedway. Read more here.

MARCH 13 10:43 a.m. — San Antonio's Fiesta event has been postponed until November 5-15, 2020. The festival boasts the second-largest parade in the country had been slated to start April 16, but as the number of coronavirus cases continued to increase nationwide, so did the citywide anxiety about hosting such an enormous celebration. Read more here.

MARCH 13 9:53 a.m. — A statement in from H-E-B this morning after yesterday's run on grocery stores across the country. They are telling customers they should not panic and should not stockpile or overbuy - "we have the ability to restock shelves and encourage our customers to remain calm." Read more here.

MARCH 13 9 a.m. — The Masters golf tournament has been postponed. Statement from Chairman Ridley: "Considering the latest information and expert analysis, we have decided at this time to postpone @TheMasters , @anwagolf and @DriveChipPutt National Finals." Read more here.

MARCH 13 8:49 a.m. — Sen. Cruz of Texas announces decision to extend his self-quarantine until March 17th. "I still have no symptoms and feel fine, and I was looking forward to taking my family out to dinner tonight. Unfortunately, last night I was informed I had a second interaction with an individual who yesterday tested positive for COVID-19," the senator stated in a press release this morning. He also spoke with CBS This Morning by phone.

MARCH 13 8:43 a.m. — National news: On a weird note, authorities in Arkansas are trying to figure out how dozens of rolls of toilet paper ended up dumped on the side of I-49. A big loss for our toilet paper-crazed society right now. Read more.

MARCH 13 8:31 a.m. — The stock market has just opened, and the Dow was up 1,200 points shortly after the opening bell. Watch the ticker live on this page. Read more here.

MARCH 13 8:01 a.m. — Dallas County officials declared a local disaster Thursday night in response to the COVID-19 pandemic that has swept the world and has infected 13 people so far in North Texas. 5 new cases were reported in Dallas County overnight. Gatherings of 500 people or more are banned. Read the latest out of North Texas here.

MARCH 13 7:03 a.m. — Austin doctors say one of two patients reported there overnight has connections to Houston. Officials say they received an alert from Montgomery County about the woman. Also, the University of Texas has now canceled classes and closed its Austin campus, reports KVUE. Read more about the Austin cases here. | Read more school closings here.

MARCH 13 7:01 a.m. — Matress Mack is selling facts, not fear (or furniture) in a new television spot on Houston's airwaves this morning. Take a look here.

MARCH 13 5:46 a.m. — World news: European Union interior ministers on Friday were trying to coordinate their response to the novel coronavirus as cases spread throughout the 27-nation bloc and countries took individual measures to slow the disease down, the Associated Press reports.

MARCH 13 5:25 a.m. — Houston Mayor Sylvester Turner has words for those who went into panic-buying mode on Thursday and emptied shelves at stores across our area: "The world is not coming to an end. But if it is all that bottle water and toilet paper you are buying will not get used," the mayor tweeted. Read more here. By the way, this is a common sight right now at stores not just in Houston but across the world:

MARCH 13 5:18 a.m. — US News: Australian Home Affairs Minister Peter Dutton is in isolation at a hospital after testing positive for the coronavirus. He returned to Australia on Sunday from Washington, D.C., where he met U.S. Attorney-General William Barr and President Donald Trump's daughter, Ivanka, last week, the Associated Press reports.

MARCH 13 4:45 a.m. — Houston news: We asked each of the county’s health department’s how many tests have been performed in total since all of this started. Montgomery County said it has tested 18 people since February. Seven were negative and the health district is still waiting on the remainder of the results. The health district said other tests have been performed privately and it does not track those. Other counties are not yet releasing this information, however. Read more here.

MARCH 13 4 a.m. — House Speaker Nancy Pelosi says she and the Trump administration are close to agreement on a coronavirus aid package, as negotiators struggle to hammer out a deal to provide funding and resources for American workers, families and businesses reeling with health and financial problems from the crisis. Final details are being worked out. but Pelosi expects an announcement Friday. The House could swiftly vote. Read more national/world updates here.

MARCH 13 4 a.m. — At least four states have announced that all schools will be closed for at least two weeks:  Oregon is joining at least three other states in announcing that schools statewide will be closed for at least two weeks in an effort to stop the spread of the new coronavirus. Gov. Kate Brown announced late Thursday that schools will be shuttered this coming Monday through Tuesday, March 31. That includes the state's spring break. Maryland is also closing schools for two weeks starting Monday. Ohio is closing schools for three weeks starting Monday. Michigan is also shutting down school until April 5. Oregon has seen an increasing number of cases of the virus. The state is next door to Washington state, the U.S. epicenter of the virus. Washington Governor Jay Inslee announced Thursday that all schools in the greater Seattle area would close through April 24. Read more national/world updates here.

MARCH 13 1 a.m. — "We are taking it one-day-at-a-time." That's the message from actor Tom Hanks and wife Rita Wilson as they recover from the coronavirus in Australia. The couple posted an update on Instagram Thursday night. "There are things we can all do to get through this by following the advice of experts and taking care of ourselves and each other, no?" Hanks wrote.

MARCH 12 7:47 p.m. — The PGA Tour first said there would be no fans. Now there will be no players. In a late night decision, the PGA Tour canceled the rest of The Players Championship and said it would not play the next three weeks. Read more here.

MARCH 12 7:45 p.m. — Disney World announces its park will be closed for the remainder of March along with Disneyland Paris. Disney Cruise lines will suspend all departures from March 14 through the end of the month.

MARCH 12 6:31 p.m. — Cirque du Soleil is canceling its ALEGRIA show that was scheduled to run in Houston from tonight until April 12. Organizers are asking ticket holders to keep their tickets until they receive further instructions.

MARCH 12 6:17 p.m. — The XFL is canceling the rest of its season, the league announced tonight. All ticket holders will receive refunds or credit towards future games, the league said in a statement.

MARCH 12 6:17 p.m. — The Montgomery County Jail is suspending all visitation until further notice "out of concern for our inmates and the general public." The Montgomery County Sheriff's Office reports that family and friends of inmates can communicate with them via phone or through the mail.