Ian McFarland continues to post a mask ban notice in the window of his gun shop, even as some grow concerned over rising case counts 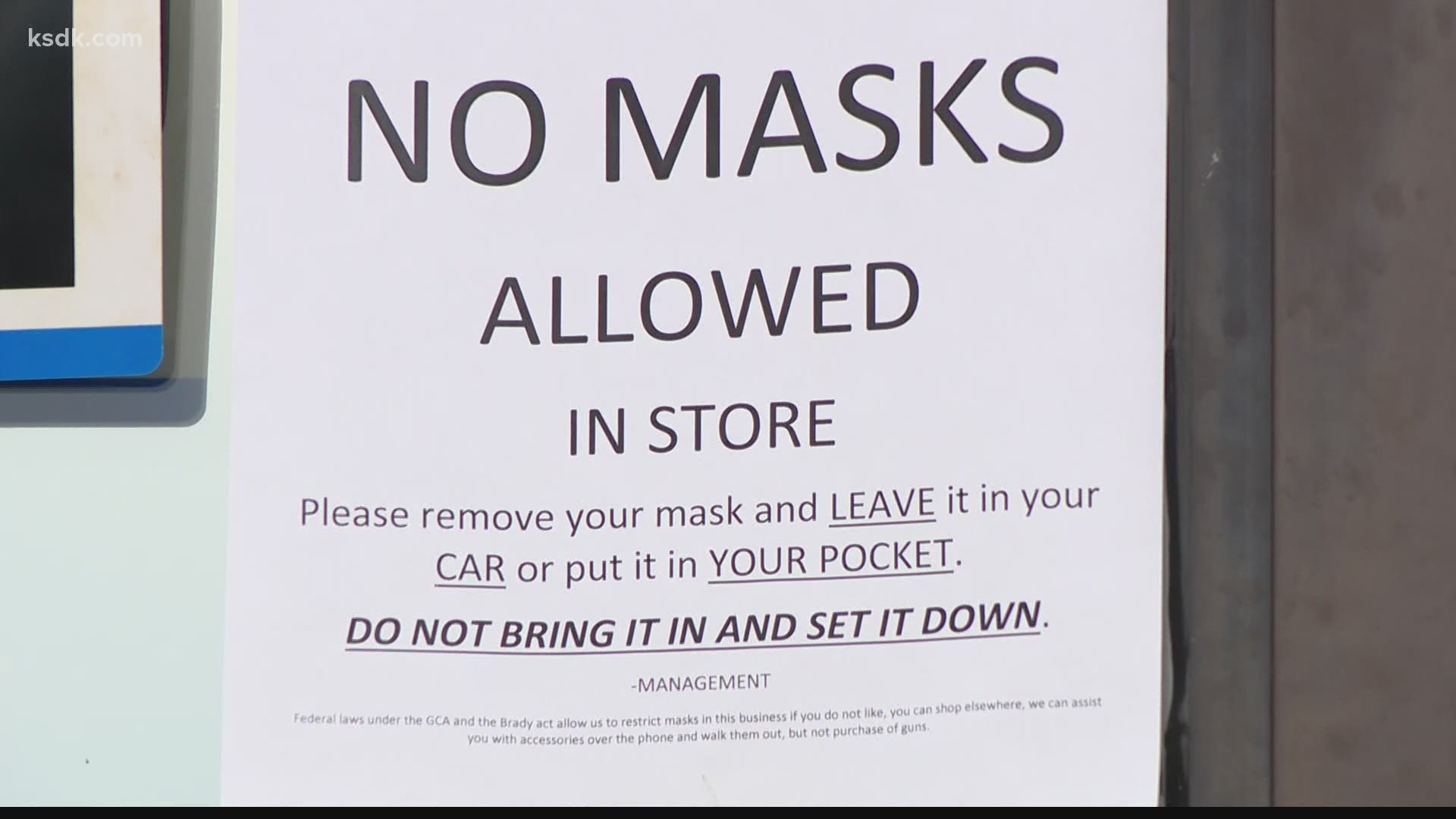 JEFFERSON COUNTY, Mo. — Jefferson County is in the red. Health department leaders officially moved the county to the highest coronavirus alert status Tuesday, saying community transmission is out of control.

Last month, county officials voted to implement a mask mandate but reversed that decision the next day.

At least one local store has banned masks inside — arguing safety, a claim some potential customers don't buy.

"One of the things is we are selling firearms, so we have to identify the person that we're selling it to 100%," owner Ian McFarland explained.

McFarland said he banned masks in his gun store, Modern Weapons Systems, from the very beginning of the pandemic. When the county considered a mask mandate, he found lawyers who would sue. As local numbers rise, McFarland disavowed the data.

"[Director] Kelley Vollmer is skewing the numbers so that she can pass the mandate. That's what she's doing," McFarland said, adding, "I don't believe anything she is saying."

At least one customer has taken issue with this stance.

Self-described hobbyist shooter Charleen Shakman said she drove 45 minutes to McFarland's Murphy storefront because the national ammunition shortage limited stock at shops closer to home. Shakman said she called ahead to make sure the item was in stock. Upon arrival, she read a paper sign in the window: "STILL NO MASKS ALLOWED IN STORE".

Fine print at the bottom — which Shakman said she did not see at the time — includes "'masks are for cry babies, Democrats and Robbers' and we always shoot robbers."

McFarland and Shakman disagree on the tone of the conversation, each believing the other to be more combative.

But Shakman said she felt like she was refused service and decided to leave a review online.

"I posted a one-star review on Google of the store and with an explanation of what happened, and that's when it all started," she said.

What started was a barrage of hateful messages. A veteran with a Purple Heart, Shakman said she falls in line with McFarland's typical customer base, but she said her feeling on masks made her a target.

"I mean, honestly, I was in tears multiple times just for days. I don't know why; I suspect I was just super sensitive to what was going on with my dad, and this whole thing just like triggered me," she said with a reference to her father's May 12 death.

Shakman said her father died of COVID-19 while traveling overseas, and her family was in a well-documented months-long battle to bring his body back. She said this hits home for her, while McFarland said this is about his family, too.

"My safety of my family and my children and me and my friends and my people who are patrons here is more important than the safety of someone who is scared of COVID," McFarland said. "If they're scared of COVID, go home."

When it comes to the social media side of this issue, it has been devastating for Shakman, who finally had a funeral for father Sunday nearly four months after his death. Shakman said his return was only made possible after Sen. Josh Hawley, R-Mo., intervened.

But McFarland said the social media response has been 90% positive for his business, bringing in new customers, including a woman who McFarland said dropped $900 in support.

In announcing the advancement to level red, Jefferson County health officials asked people to wear masks while in public, though they will not require them.