'If you don't want to go out, don't go out' | Gov. Greg Abbott discusses his plan for reopening Texas in KVUE interview

Tuesday evening, Gov. Greg Abbott spoke with KVUE Political Anchor Ashley Goudeau about the announcements he made on Monday. 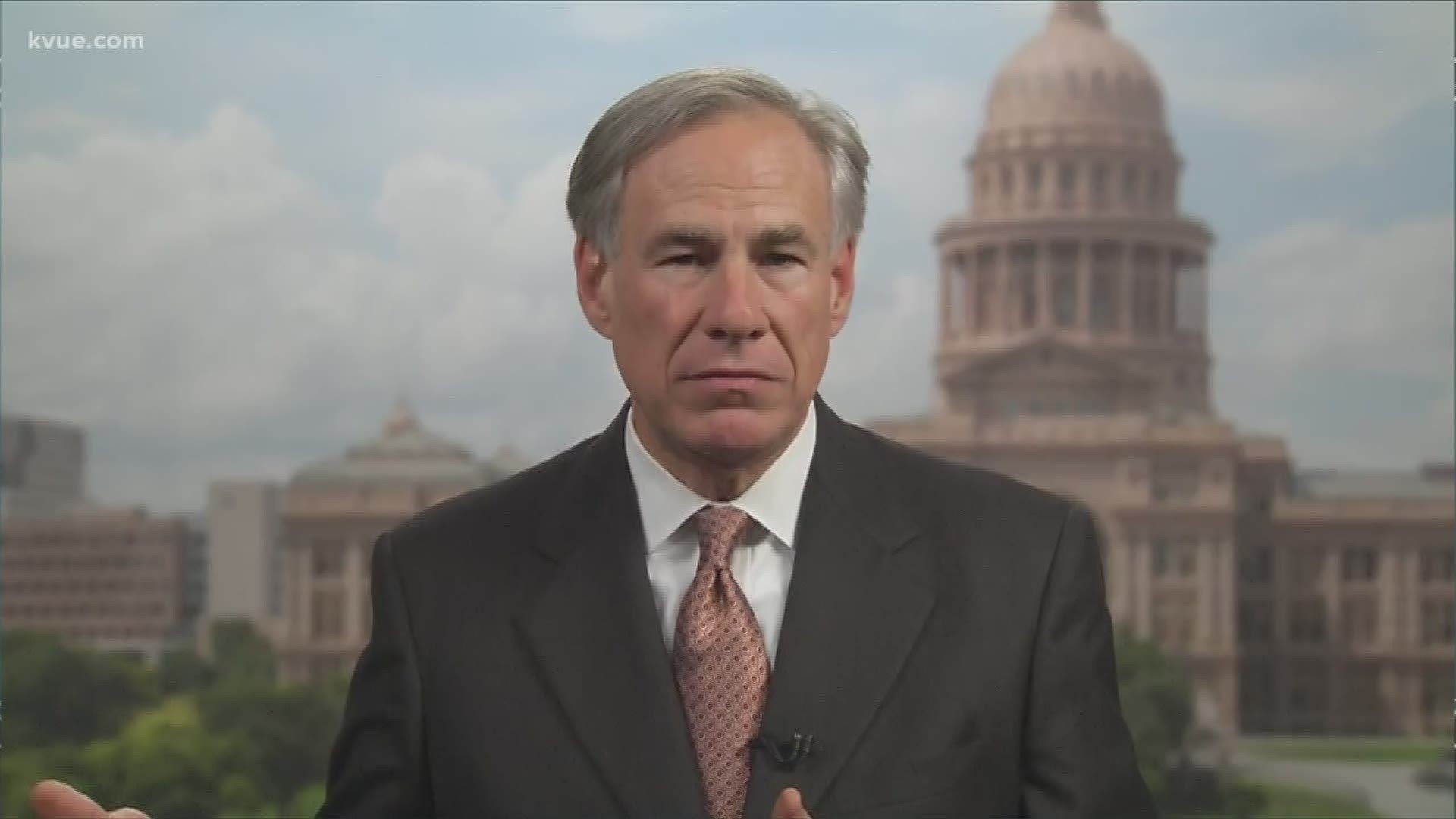 AUSTIN, Texas — Gov. Greg Abbott was a busy man Monday afternoon. He made several major announcements, including that the Texas "stay home" order will be allowed to expire on Thursday and that several types of businesses will be allowed to reopen on Friday.

With so many changes coming, many Texans have a lot of questions. KVUE Political Anchor Ashley Goudeau spoke with Gov. Abbott on Tuesday.

You can read the full transcript of the interview below:

Ashley Goudeau: "You know, Governor, you obviously issued that order yesterday and this Friday, May 1, a lot of businesses are going to be able to open, but with some capacity limits. But there is data from the Institute for Health Metrics and Evaluation – this is what's widely used – they say Texas is four days away from having a peak in deaths. That would be May 2. UT researchers also say Texas has not peaked yet. So, talk with our viewers about why May 1 is the date you chose."

Gov. Greg Abbott: "Several reasons. First, for your viewers, I like that first sampling entity that you talked about – they're the same ones who said that Texas was going to max out in late April or early May with like, 250 or 500 deaths per day, something like that. And they had all these outrageous numbers in there, and they had to consistently go back and recorrect their models. Bottom line: the models have been proven ineffective and way wrong all along. And so, we've got to be careful about watching those models.

What we have to do is watch what the real data shows. First, understand this, Ashley, and that is my decision wasn't just made off the top of my cuff. It was made based upon the input from doctors – four great doctors, including a former head of the FDA, the former head of Medicaid and Medicare, an infectious disease specialist here in Austin at UT Dell Medical School in charge of tracing and tracking COVID-19, as well as the State health doctors. And so, this is a decision driven by doctors who care about public health here in the City of Austin and across the entire state of Texas. And what they concluded was this: The day that Texas reached the peak in the number of people who tested positive for COVID-19 was April the 10th. For the past 18 days, there's been a steady decline.

That said, because we are testing more people now, there will be more people testing positive. Ashley, what really matters are these two metrics: What is our hospitalization rate and what is the death rate? Understand that Texas has either the third or fourth best – meaning lowest – death rate in the United States. Texas never has had a situation like New York, like California, like Washington, like Louisiana, like New Jersey, like Michigan, like Illinois, with deaths. We never have had capacity strains on our hospitals like those states. If you go back to that first study you were talking about, they made it sound like Texas would face hospital bed and ICU unit capacity strains – that never happened. And that's why we need these nurses and doctors to get back to treating cancer, to treating heart disease, to treating our patients with challenges they really have. We are losing people who may be having their life taken from them, not because of COVID-19 but because of other health issues. We need these doctors and nurses getting back to work. With regard to the other openings, remember this: Because of the advice of doctors, they will be very limited openings, which will mean that the potential expansion of COVID-19 will be very minimal. We're going to contain the spread of COVID-19 while we do allow some people to get back to work.

But the last thing is that we know that there are people in Austin and elsewhere who are afraid to go out. This is not an order that you have to go out. If you don't want to go out, don't go out. If you don't want to open your business, don't open your business. We do strongly suggest that if you do go out, you wear a mask and, most importantly, we strongly suggest if you're 65 and older, continue to stay at home. Seventy-five percent of all the deaths were people 65 and older, that is the vulnerable population. It’s best for them to go ahead and stay at home at this time."

Goudeau: "Governor, tell us about those local orders. Some people are confused about the role those local orders to mandatory wear masks, those stay-at-home orders that are still in effect for some counties. How those play a role in your orders – talk to us about that."

Abbott: "Sure. Because the order that I issued is a statewide order, it means that all the counties in the State of Texas are required to follow that order and no county can issue an order contrary to the executive order that I issued yesterday. With regard to masks in particular, we, on almost every single page of what I laid out yesterday, we tell the public it is the safe thing to do to wear a mask. We strongly encourage you to wear a mask. We simply said that a government cannot fine you or arrest you or whatever the case may be if you're not wearing a mask. Of course, it is kind of bizarre to think that a government is letting dangerous criminals out of jail but they would be threatening jail to someone who is not wearing a mask. That just doesn't make sense. And so, there will be no fine or penalty for failing to wear a mask. However, everyone, including me, including doctors, strongly suggest that you do wear a mask if you are going out."

Goudeau: "Governor, you know, a question for you: Health and Human Services isn't releasing data on which nursing homes are having these clusters and having large numbers of deaths that are being reported. Do you think that's information they should be releasing to the public and to the media?"

Abbott: "I'm not sure why they're not releasing that data. I would need to find out more about why. I don't know if it's certain like, HIPAA rules or other types of, it could be federal rules prohibiting the release of certain medical information..."

Goudeau: "They told us they would identify patients, but I know you'll recall back in 2004 when you were attorney general, you issued an opinion that says data doesn't violate privacy laws and the courts actually agreed with you on that."

Austin health leaders are not disclosing which nursing homes have COVID-19 cases. Here’s why

Abbott: "Right. And again, I would need to talk to the folks at DSHS [the Department of State Health Services] to find out why they're not releasing that information."

Goudeau: "Governor, do you plan to go to any restaurants or the movies on Friday?"

Abbott: "Tell you what, it's not on my list yet. I'm going to talk to my wife about it and see if we can. I don't know if we'd be able to get in. We'll see what the crowds look like."