Dr. Francis Collins also offered his thoughts on whether Houston should reopen schools to in-person learning. 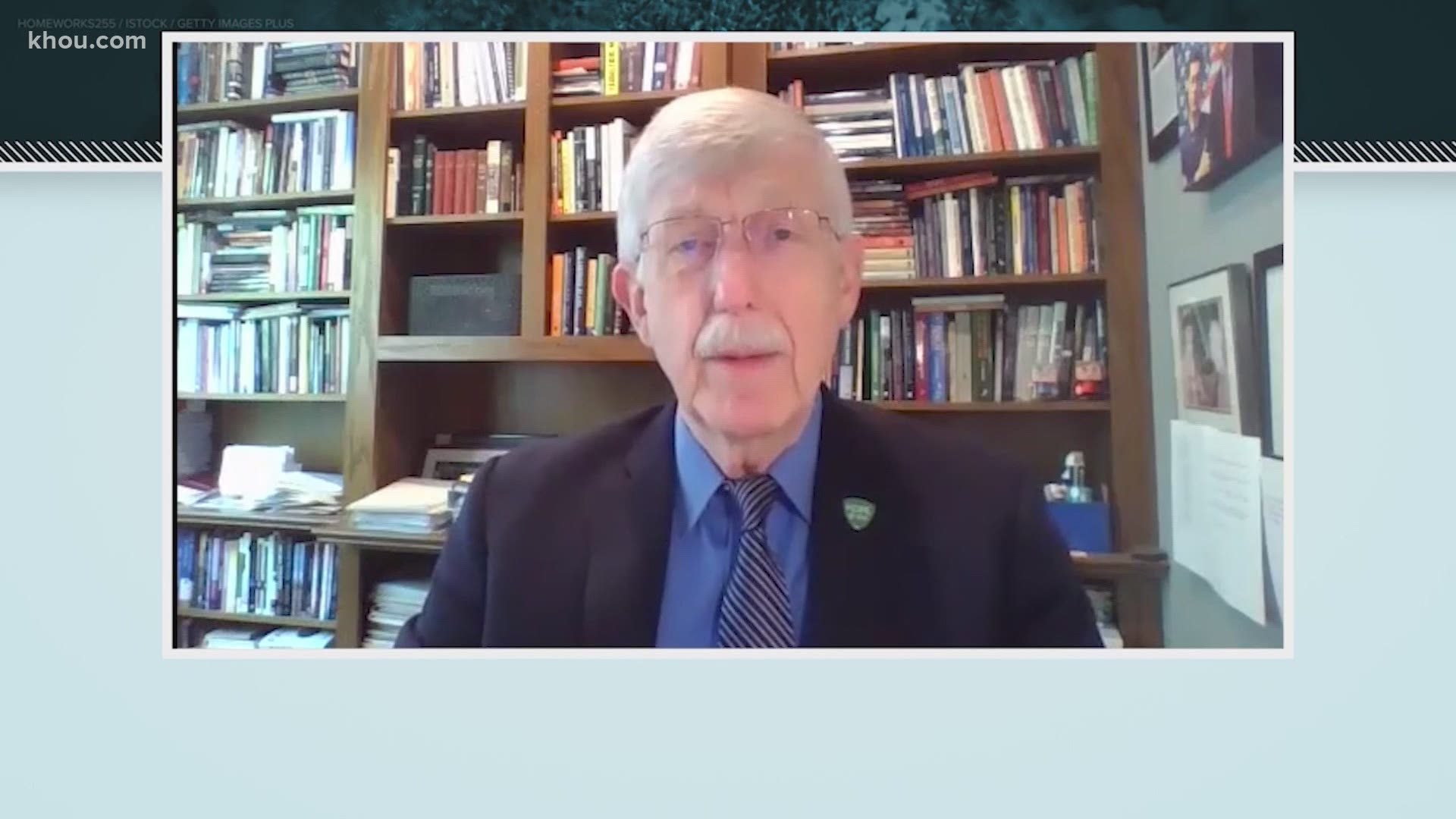 HOUSTON — Dr. Francis Collins, Director of the National Institutes of Health, sat down to answer some questions about a COVID-19 vaccine that is in the works.

The third stage of a clinical trial is underway and about 30,000 volunteers are expected to take part. Vaccine candidates will be tested at 89 clinical research sites in the United States.

Here's what Dr.Collins had to say about the vaccine.

Q: How long before a vaccine is available to the public?

Collins: "We would imagine it's going to take at least three months to find out whether it's safe and effective. So, we're talking about later this year, probably about the end of the year before that decision gets made by the FDA. And of course, it's not just one vaccine trial. There's actually about seven of them that are going to be going forward in the course of the next two or three months. And that's good right up putting all of our eggs in one basket. But count on it. By the end of this year, we should have data to say whether one or more of these vaccines turns out to be a winner, in which case we're going to want to start to distribute it as quickly as possible to the people at high risk."

Q: Who gets the vaccine first?

Collins: "Well, we're doing something it's never been done before, which is actually manufacturing millions, tens of millions, of doses of each of these vaccines even before we know if they work because we don't want to have a long gap there waiting for the manufacturing to happen.

"But still, we won't have enough for every American at the end of this year. So there will have to be priorities. Certainly, people who are at high risk are going to be at the top of that list. People with chronic illnesses, the elderly ... African-Americans, Latinos seem to be hit particularly hard with this disease. All of those considerations will need to be made."

Q: How many doses does each person have to get and how long will it take to vaccinate everybody?

Collins: "Well, the vaccine trial that's going on right now is a two-dose regimen. You get one injection on day one and another on Day 28.

"Kind of like a booster because, you know, that's going to give a better immune response. To vaccinate everybody in America in 2021 is going to take a while. But we do have a plan about how to scale up the number of doses necessary to achieve that. But everybody needs to recognize that will take several months and it will have to be done so that the highest risk people get first in line."

Q: How long before we know if it's providing herd immunity?

Collins: "Herd immunity generally requires something around 70 or 80 percent of the population to be immune to the disease. So you'd have to immunize that proportion of a particular community in order for that to kick in. Herd immunity, of course, gets to the point where the virus doesn't have enough vulnerable people around to propagate itself, and then it kind of fades away. We're a long way from that right now. By late spring, we might get.

Q: When kids should go back to school?

Collins: "I think this has to be considering the community circumstances. If you're in a community where the virus is almost not apparent at all and people are ready to go back to school, we know it's good for kids to be at school.

"I think Houston needs to be really thoughtful about whether this is a safe thing to do right now. We do know that kids can get infected. We certainly know their teachers can. So every school district has to look at the evidence and try to decide whether the benefits are worth the risk if the virus is actively spreading. It may not be the time to bring everybody back."