Dept. of Labor Commissioner: 'Put a wild guess out there, we are probably going to see 10 times the normal volume that we would normally see in a one week period.' 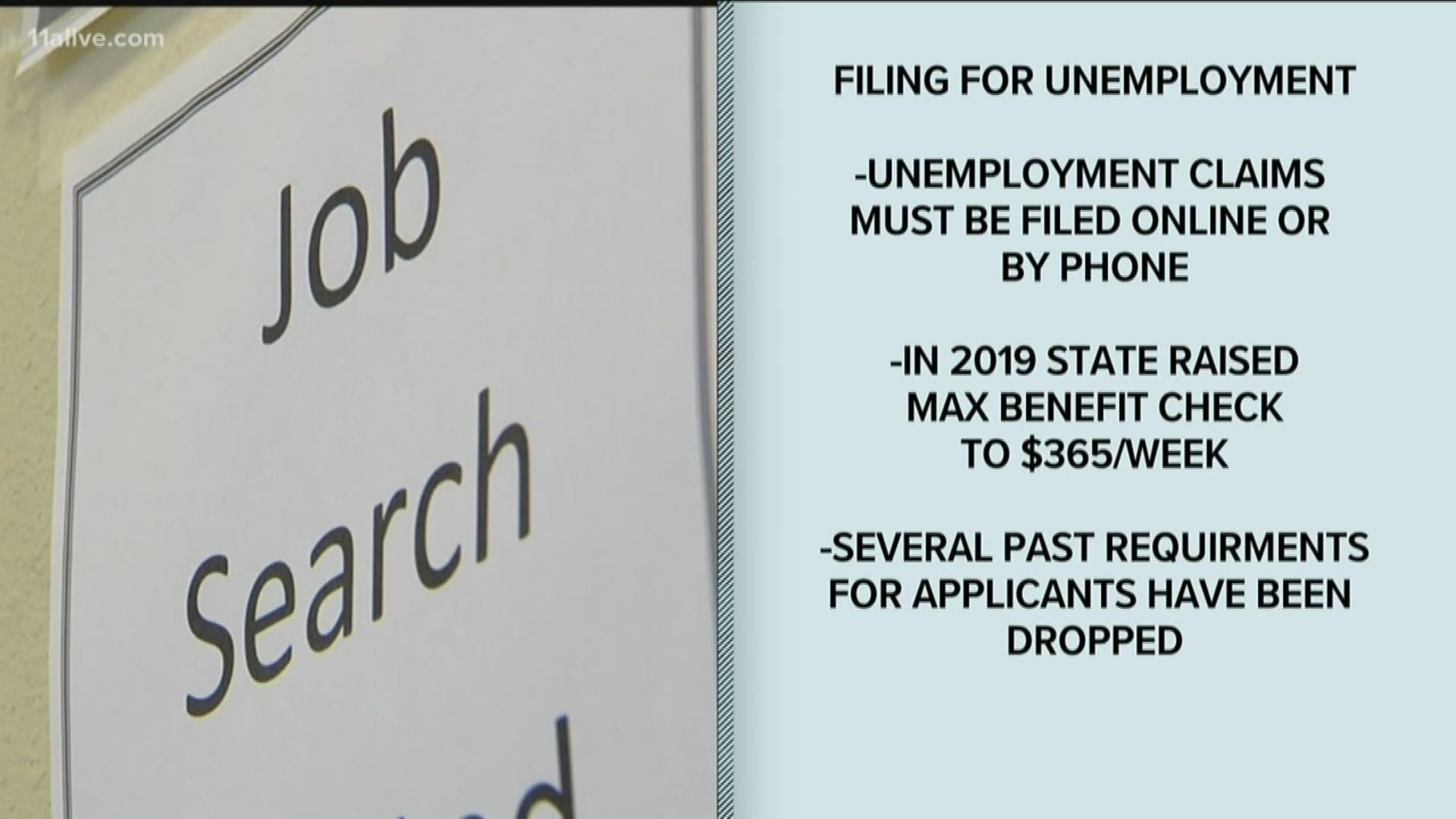 ATLANTA — In January the Georgia unemployment rate hit a record low at 3.2 percent, according to a press release from the office of Gov. Brian Kemp.

"These record-breaking numbers are a testament to what we all know to be true: Georgia is leading the nation in business-friendly government and workforce development," Kemp said in the January press release.

But now as the COVID-19 pandemic is causing business owners across the state to cut back operations, or close completely and let employees go, the state is seeing a massive influx in the number of unemployment claims being filed.

RELATED: How to file an unemployment claim in Georgia if your job has been affected by coronavirus

The Georgia Department of Labor expects on Thursday to release numbers for the exact amount of claims filed over the past week.

"I will go ahead and put a wild guess out there, we are probably going to see 10 times the normal volume that we would normally see in a one week period," said Georgia Department of Labor Commissioner Mark Butler.

The number of claims to be released Thursday could show the worst unemployment claim period for Georgia in more than a decade.

Since then the economy recovered and the total unemployment claims filed per week fell significantly. Data on the Federal Reserve website shows in the first week of March 2020 Georgians filed 4,569 claims.

In response to the number of claims once again skyrocketing, the state published several articles to help applicants and employers navigate the unemployment system.

The DOL website includes specific information for individuals and employers:

Butler said it is important to note, the spike in claims his department is currently receiving is much different than a recession.

"Typically when a normal economic recession happens, it is a gradual thing and you will see the claims accelerate over a period of months. This is a totally different case. We've been saying this is the ultimate stress test for the Department of Labor," Butler said.

After closing public access to local career centers across the state, the Georgia Department of Labor is only accepting claims online, or by phone for individuals without internet access.

"The reason why we shut down public access to our offices, is very early on we were having individuals come into some of our career centers and state that either they had been diagnosed or told to go home because they may have come into contact (with someone with COVID-19)," Butler stated.

He added had career centers remained open, he would have risked the health of his employees and could have ended up with less staff to handle the influx of claims.

Currently, certain criteria to file an unemployment claim have been relaxed. Butler said emergency changes include tossing out a requirement for applicants to first conduct a job search. The current climate doesn't allow all individuals to immediately search for new employment.

The commissioner also added a relatively new change for applicants is an increase in the maximum benefit. In 2019 the state increased the maximum weekly unemployment benefit to $365. The actual amount an individual receives per week is based on their previous salaries.

As claims pour in, the time it takes for the state to process an unemployment claim, Butler expects, will take longer than usual.

"There is no doubt there is going to be some delay due to the massive amount of volume, and quite frankly we are understaffed and there isn't a whole lot you can do about that because it would take a while to train somebody up," he said.

Butler added the reason his office is employing fewer people currently than in the past is that part of his department's funding is handed down by the federal government. The amount of federal funding the department receives is linked to the unemployment rate.

When the economy is strong, the office isn't always able to employ as many people to handle claims.

Coronavirus in Georgia: Cases now stand at 1,026 with 32 deaths

Should I go to the ER or urgent care if I suspect Coronavirus?