He says staying at home is the least people can do to help those most vulnerable. 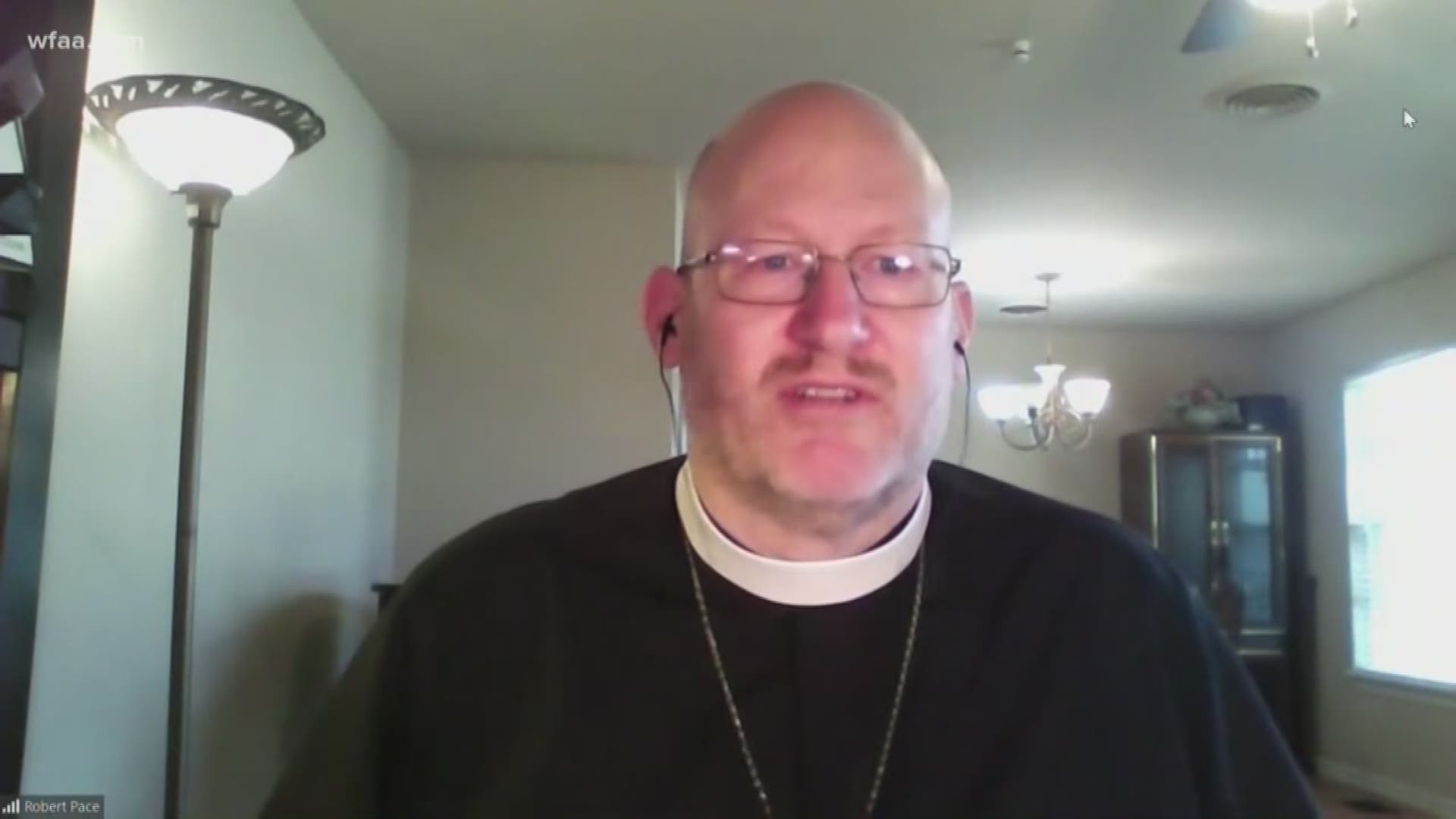 FORT WORTH, Texas — At first, it felt like the flu.

His body ached. He had a fever. He was short of breath. He had a cough that felt unending.

But Rev. Dr. Robert Pace did not have the flu. He had COVID-19 and would become the first confirmed case in Tarrant County.

“This was the worst I have ever been sick,” Pace said Thursday. “I do not recommend this to anybody. This was horrific.”

Pace, the rector of Trinity Episcopal Church, spoke to WFAA from the living room of his Fort Worth home via Zoom. He is still recuperating and his voice sounds raspy.

“I’m so grateful for all the prayers,” Pace said. “I am feeling so much better.”

Pace began feeling ill in late February about five days after returning from a conference of Episcopal parishes in Louisville. He went to his doctor on Feb. 27. He tested negative for the flu twice.

For several days, his fever abated and he felt well enough to speak at the church’s Lenten program March 4. He kept his distance because he was still coughing.

But then the fever hit with a vengeance. Pace's temperature reached 103.

RELATED: Man with 'presumptive positive' case of COVID-19 in Tarrant County identified as Episcopal rector in Fort Worth

Still, he wasn’t thinking he had COVID-19, not until he learned that another conference-goer had tested positive for the illness. That was on March 9. He called his doctor and they met at the emergency room of Baylor, Scott and White All Saints Medical Center.

The next day, the results came back: He had COVID-19.

“I was pretty shocked and scared by then,” he said. “I had serious, serious pneumonia…. My breathing was very sketchy.”

Doctors put him in isolation, only entering once they had put on protective clothing. He was given oxygen to help him breathe.

Pace was released from the hospital March 11 and spent the next week in quarantine, his wife delivering meals to the door of the bedroom. Pace is grateful to the doctors and nurses.

“The medical professionals in this community are all saints, I would say,” he said.

He was released from quarantine March 19.

“I have my official letter from the Tarrant County health department,” he said with a chuckle. “I feel like I want to frame it.”

His wife, Jill Walters, a chaplain at All Saints Episcopal School, tested negative for the illness. As a precaution, she remains under quarantine in their home for the next seven days, he said.

Pace is taking joy in the simple things, taking their dog for a walk and going to the grocery store. His voice returned over the last few days, and this Sunday, via Facebook live, he will be leading worship services for his congregation.

“We will make it through this,” he said. “Jesus is with us in the middle of this.”

Now he has antibodies to COVID-19, he’s been talking to his doctor about how he can help. The Food and Drug Administration has approved using the plasma of survivors to help treat seriously ill patients.

“I would be happy to do whatever I can to help those who need it,” he said. “I’m grateful to have recovered. I pray every day for those who have this illness.”

“This is not excessive,” he said. “We are not being asked to do more than we can do. Staying in place is the least we can do.”