Dr. Amy Acton to 3News' Russ Mitchell: ‘The coronavirus threat is something we're going to deal with for at least two years'

The director of the Ohio Department of Health spoke with 3News' Russ Mitchell for a lengthy one-on-one interview about the state's fight against coronavirus. 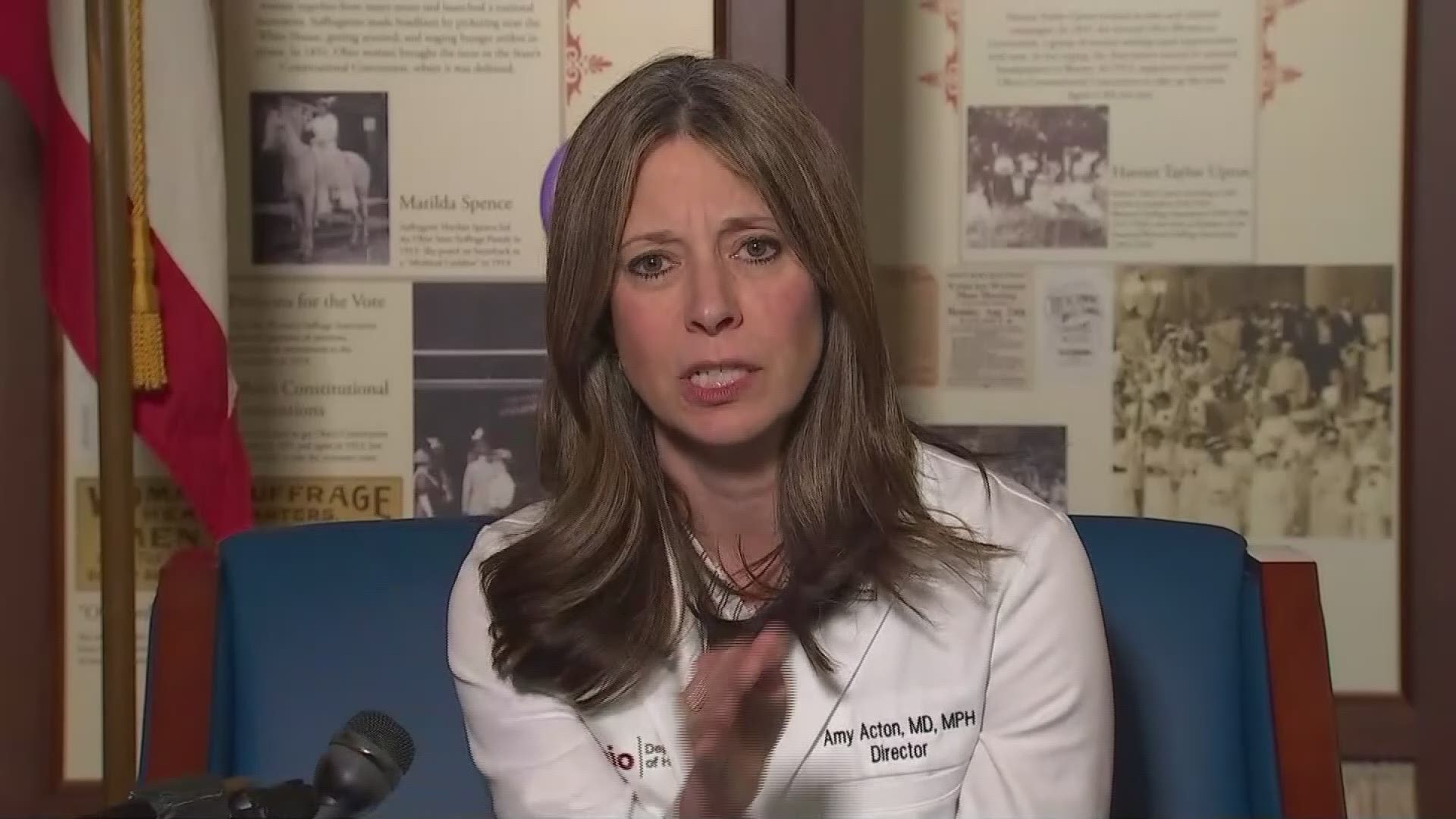 CLEVELAND — She has become one of the most important voices of information in the battle against coronavirus.

Dr. Amy Acton, Director of the Ohio Department of Health, has been alongside Governor Mike DeWine and other state officials daily for must-see TV press conferences during these unprecedented last few weeks.

Her calm, but clear directives have been a source of comfort for all Ohioians who are seeking answers about how to keep their families safe from the spread of coronavirus.

3News' Russ Mitchell talked with Dr. Acton for a one-on-one interview on Tuesday. We asked you to submit your questions via text and social media and we received more than a thousand responses.

Here were some of the key portions of the interview.

RM: When do you expect the number of cases in Ohio to peak?

AA: We're still using our best modeling. It's sort of like a hurricane that's moving towards us. But because of decisive, important action that we've all taken, we're able to delay that date. We also know that it's decreasing the amount of people that are infected. The dates are ramping up daily, we're on that upslope. The peak is end-April, perhaps around May 5th. So much could change with how well we do social distancing. If there is some miracle treatment, that could change it. The better job we do, the farther that peak gets away.

RM: As we speak today, what is your biggest concern about the future as we go through this?

AA: There's so much on my mind. I would say that I really hope that everyone at home does everything they can within their control so we can protect the folks that have to be out there being more exposed. I worry with good weather. I worry with our exhaustion of having to do this. It worries me that people will let up. And you can't in this. Even peaking in May time means we have to come down from that curve and we really can't relax what we're doing until we know the number of cases through good testing, until we have enough gear, until our hospitals have enough capacity. And when we go to the point where we start to pull back some of these measures, it will have to be done in a really deliberate way. So there is no quick, week-from-now-solution, and I know that's really tough for people to hear. But we will guide you every step of the way with the best recommendations.

RM: You've referenced the 1918 Spanish Flu several times during your briefings, where a strain started in the summer, then in the fall. How concerned should we be that this could happen this time around?

AA: I think Dr. Fauci, director of the NIH (National Institutes of Health) has said some of what they're seeing in the data is that it will have surges. It will come back. Until we have a vaccine, until we have immunity in our population, it's going to be a threat for us. This is really going to be something we're dealing with over a couple years. The more time we buy, the more we take these precautions now...we don't want to have a second surge now, in June. Then the best science will guide us as we enter fall. Every day they're fighting to get a vaccine. Every day they're testing to have an anti-viral, which I think we could have sooner than a vaccine. You see that there are antibodies serum from people who have already fought off the disease. That's being looked at as a form of treatment. All those things could come into play before we have to deal with that in the fall.

RM: Let me be sure I understand what you just said. We could be dealing with this virus for two years?

AA: This virus isn't going to go away. It's going to spread. You see in countries in Asia that are worried about it being re-introduced. Not their entire populations were sick with this disease so there are still lots of folks able to catch it. So until we have a vaccine and actual population-level immunity, those of us who haven't become sick in this first peak are still vulnerable. That's why a vaccine is so important.

You can watch the entire interview in the player below:

RELATED: Dr. Amy Acton: Ohio is currently in 'calm before the storm' with coronavirus

RELATED: 'Think about every trip to the store you make now': Dr. Amy Acton stresses urgency of social distancing during COVID-19 pandemic