People who were at the Wharf fish markets did not appear to be practicing social distancing, so they were shut down. A strong police presence is now in the area. 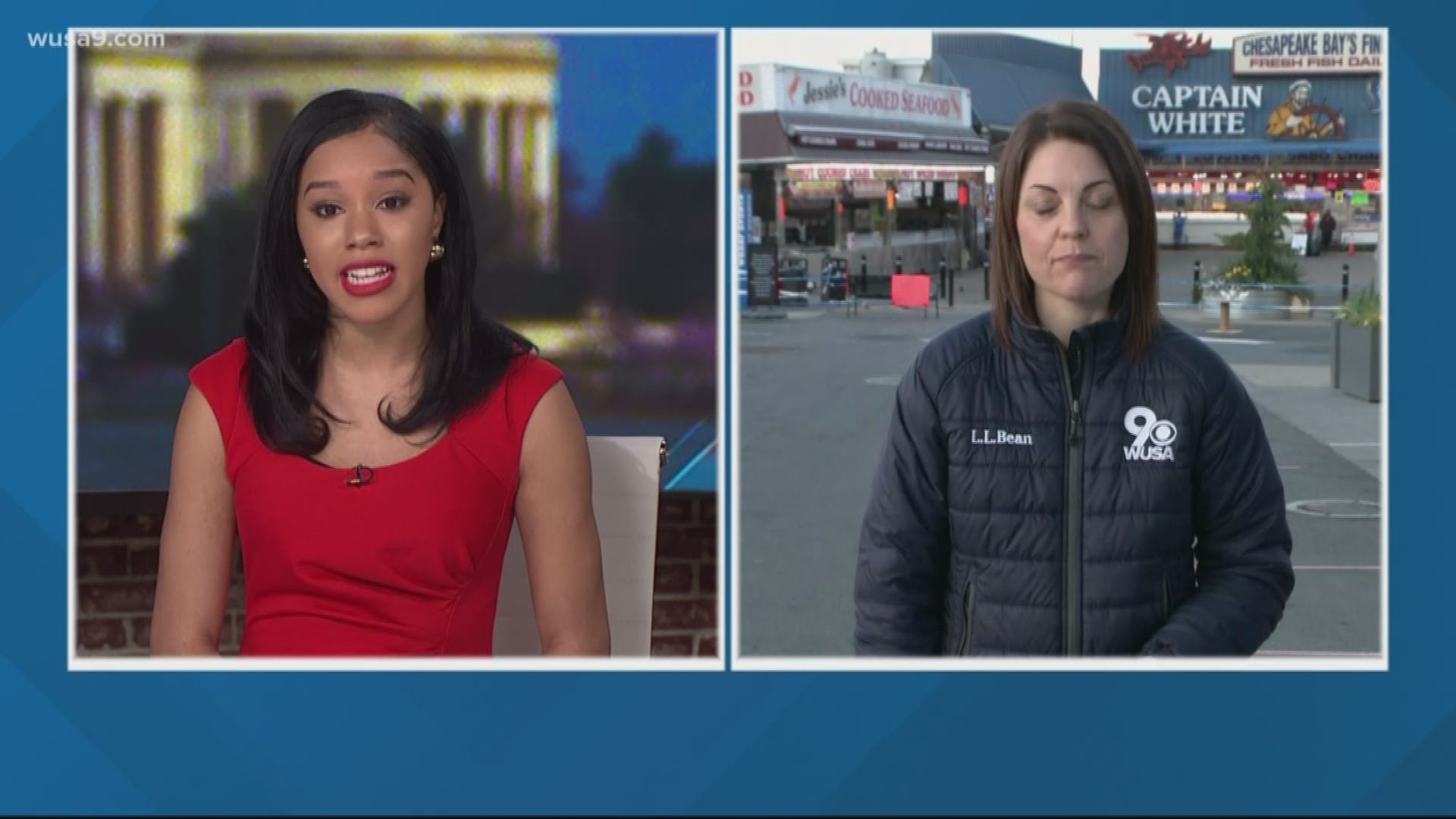 WASHINGTON — The vendors at the Municipal Fish Market in D.C.'s Wharf community are closed after it was clear that many of the people there on Saturday were not practicing social distancing guidelines to help mitigate the spread of COVID-19, D.C. Mayor Muriel Bowser said Sunday.

"The notice shall remain in effect until April 24 which is the last day of the public health emergency (subject to change)," Bowser said. "Since food is essential, the operators will be able to present a plan for social distancing to DCRA. If the plan allows for safe operations, the venue will be allowed to reopen, and DCRA and D.C. Health would continue to monitor compliance.”

Bowser on Monday said that she's food policy team to look at all options on how to make sure people can get in and out of the market, while also enforcing the social distancing policies that have been put in place.

Many employees arrived Sunday morning for work not knowing about the closure.

Captain Billy White owns three stalls at the market. He said he spent $1,800 on private security to keep social distancing in check Saturday. But, crowds were bigger than they anticipated, White said.

White said he was working with D.C. police Saturday night on a better social distancing plan, but learned about the emergency closure late last night.

According to officials, the rest of The Wharf neighborhood remains open for essential needs to members of the community, including carryout and delivery.

While some patrons to the fish market on Saturday were wearing gloves and masks on, many were not following the Centers for Disease Control and Prevention guidelines to limit the spread of the virus.

A merchant at the fish market was captured by WUSA9, even telling a customer to stay six-feet away, or that they would be "shut down."

The Wharf Community Association released the following statement Sunday about the closure.

"The health and safety of our community and the general public is of paramount importance to everyone at The Wharf.
At the request of the District of Columbia, we urged the Fish Market vendors to implement and enforce distancing guidelines to reinforce the Mayor’s Order during the COVID-19 public health emergency.  In an effort to further reduce crowds, the vendors at the Municipal Fish Market have been temporarily closed by the District of Columbia. We respect the decision of the Department of Consumer and Regulatory Affairs (DCRA) to shut down the sale of seafood from barges at the Municipal Fish Market. If the Fish Market vendors can satisfy DCRA that sufficient measures will be taken so that they can operate safely, we likewise will respect a future decision of DCRA to allow the Fish Market vendors to reopen. The Wharf neighborhood remains open only for essential access to peoples’ homes, offices, hotels, and businesses—including groceries, carryout and delivery food service, in accordance with the Mayor’s Order. All of us at The Wharf will continue to encourage complete compliance with the Mayor’s mandate in this most challenging time."  - The Wharf Community Association

D.C. police said that tickets were given out by city parking enforcement on cars that surrounded the fish market, but other types of enforcement of the stay-at-home order were not discussed by the department with WUSA9.

D.C.'s stay-at-home order, which went into effect on Monday, essentially made it law to practice social distancing. It also gave police the authority to enforce the order handed down by Bowser. 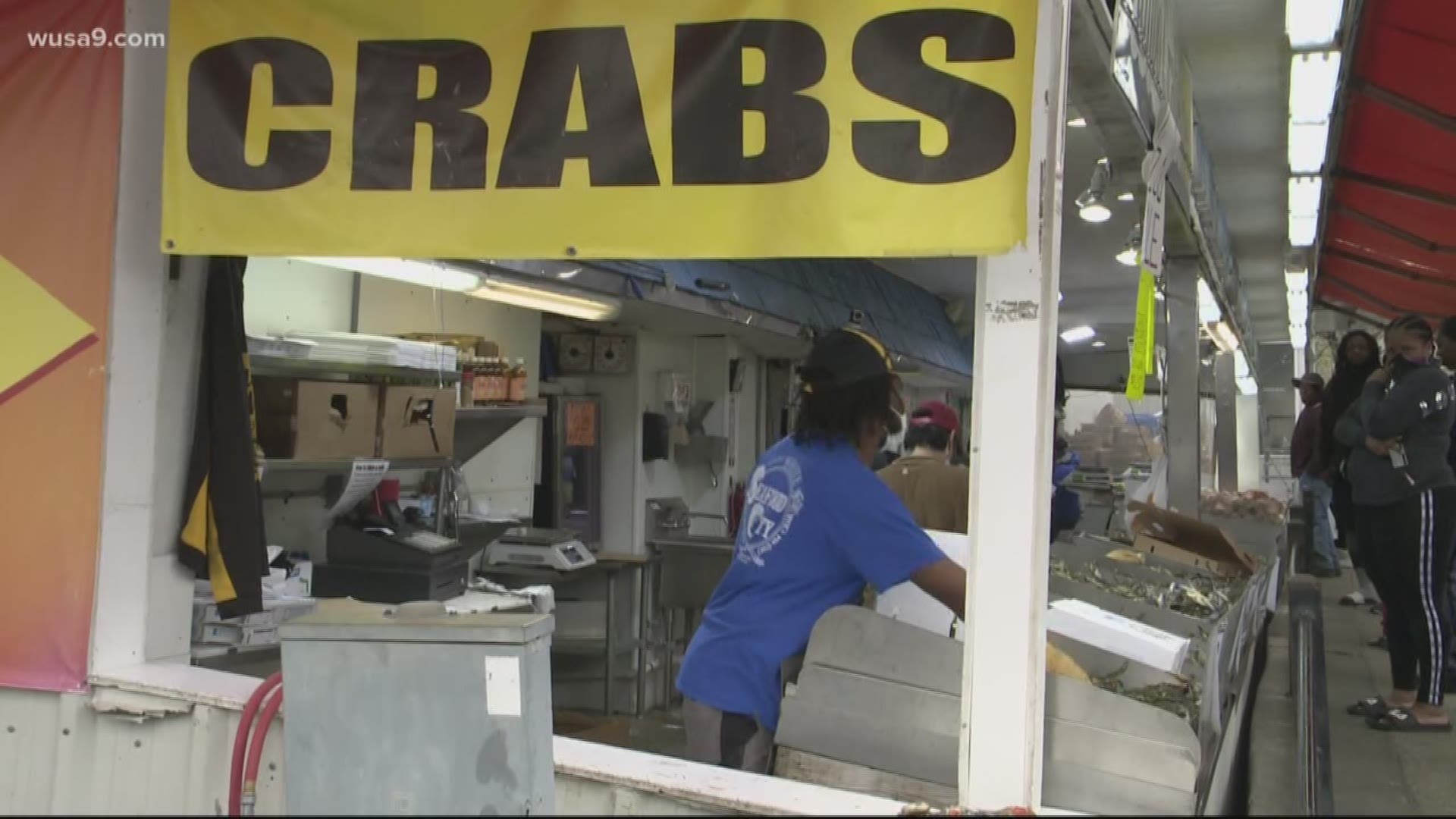 D.C. was the last in the DMV to implement a stay-at-home order and came after Gov. Larry Hogan of Maryland and Gov. Ralph Northam of Virginia sent down similar orders in their states.

Places like fish markets, meat markets and other types of food markets can be labeled as essential businesses under the stay-at-home order issued for the District.

The Wharf is home to multiple fish markets, seafood eateries and a variety of bars and restaurants. It is also a popular gathering spot for D.C. residents year-round and is also home to the popular music venue "The Anthem."

There are about 150 people who work at the fish market-plus the fishermen they buy from, White said. During the closures, he said his 50 employees would receive a full day’s wage, despite the closure.

RELATED: 'This is the moment to not be going to the grocery store' | White House coronavirus expert suggests DC's a potential virus hot spot

RELATED: At funerals in virus outbreak, mourning is from a distance

RELATED: How to make your own face mask without a sewing machine