"It’s very real and you don’t realize it until it happens to someone that you love. And it doesn’t discriminate on age, color, nothing," Tori Vondenstein said. 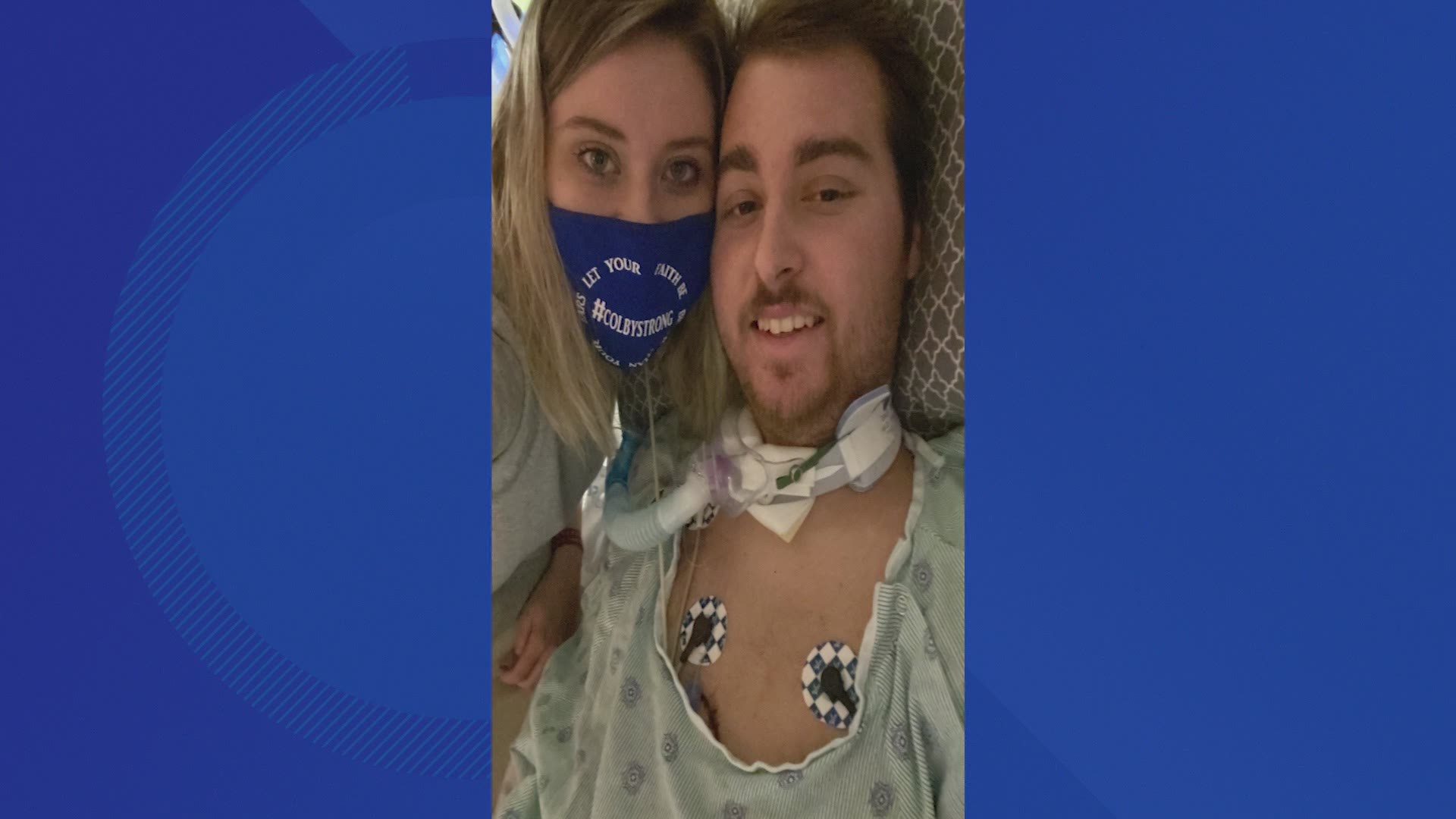 HOUSTON — Colby Vondenstein is sharing his battle with COVID-19 in hopes of reaching younger adults who might not be taking the virus seriously.

The 24-year old Harris County husband and father of three has no underlying health issues. He celebrated Christmas with his extended family. They all tested positive for COVID-19 around the same time. Vondenstein tested positive on Dec. 28.

His health deteriorated so much that he was taken, via ambulance, to San Jacinto Methodist Hospital on Jan. 5.

While on a ventilator in the hospital’s COVID-19 ICU Unit, Vondenstein’s kidneys failed and his lungs collapsed.

He was moved to the Methodist Hospital in the Texas Medical Center on Jan. 11.

Within days, doctors told his family the 24-year old would need a double lung and kidney transplant to survive.

Vondenstein's family says initially the transplant review team denied placing him on a transplant list because he was so physically weak. A couple of weeks later, his case was presented before the team, again, and he was approved for a double organ transplant.

Vondenstein’s wife, Tori, said on Feb. 28, doctors gave him just a couple of days to live. That night, doctors found a perfect match for Vondenstein’s lungs and kidney. His family says it’s a miracle.

One month later, with healthcare workers by his side and his family members praying as they watched through a video streaming service, Colby Vondenstein walked for the first time in three months.

“It felt good,” Vondenstein said during a Zoom interview with KHOU 11. He’s now out of ICU and in intermediate care.

“There are so many nurses and physical therapists,” said Tori Vondenstein as she held the phone used for the interview. “Houston Methodist has been truly amazing. Amazing. They saved his life.”

The wife of the chemical plant worker says watching her husband fight for his life in a COVID ICU Unit was, “torture. Complete torture.”

To the family of the organ donor, Vondenstein says, “I want to meet them and talk to them and tell them thank you and I’m sorry for what happened to their loved one.”

Methodist Hospital believes Vondenstein is among the first to receive a double lung and kidney transplant because of COVID-19.

Colby and his family got sick around Christmas.
Everyone but the 24YO recovered.

He has no underlying symptoms.

He's the 1st @MethodistHosp COVID patient to get a double lung & kidney transplant.

Today, he walked for the 1st time in 3 months. pic.twitter.com/uV6ruTEawq

The Vondensteins are hoping Colby’s story reminds others that COVID-19 is still spreading through the community and that we’re still in the midst of a global pandemic. “A lot of younger people blow it off and I hope that his story maybe sheds a little bit of light on how COVID can affect even the younger crowd.”

Colby Vondenstein’s family is hoping you’ll pray for his recovery. They’ve created face masks that read: let your faith be bigger than your fears. #ColbyStrong, and prayer shirts that read: this is how I fight my battles.

The hope is that Vondenstein is released from the hospital in the next two weeks. He must work with a physical therapist to re-learn how to swallow so that he can eat on his own, and he must continue to walk, one step at a time.

Colby Vondenstein is not going to physically be able to work for the next year.

His family is inviting you to a benefit at the Crosby Fairgrounds on May 8.

Here is the flyer for the benefit: