Despite a larger population, Texas deaths from coronavirus are 7 times lower than those in New York 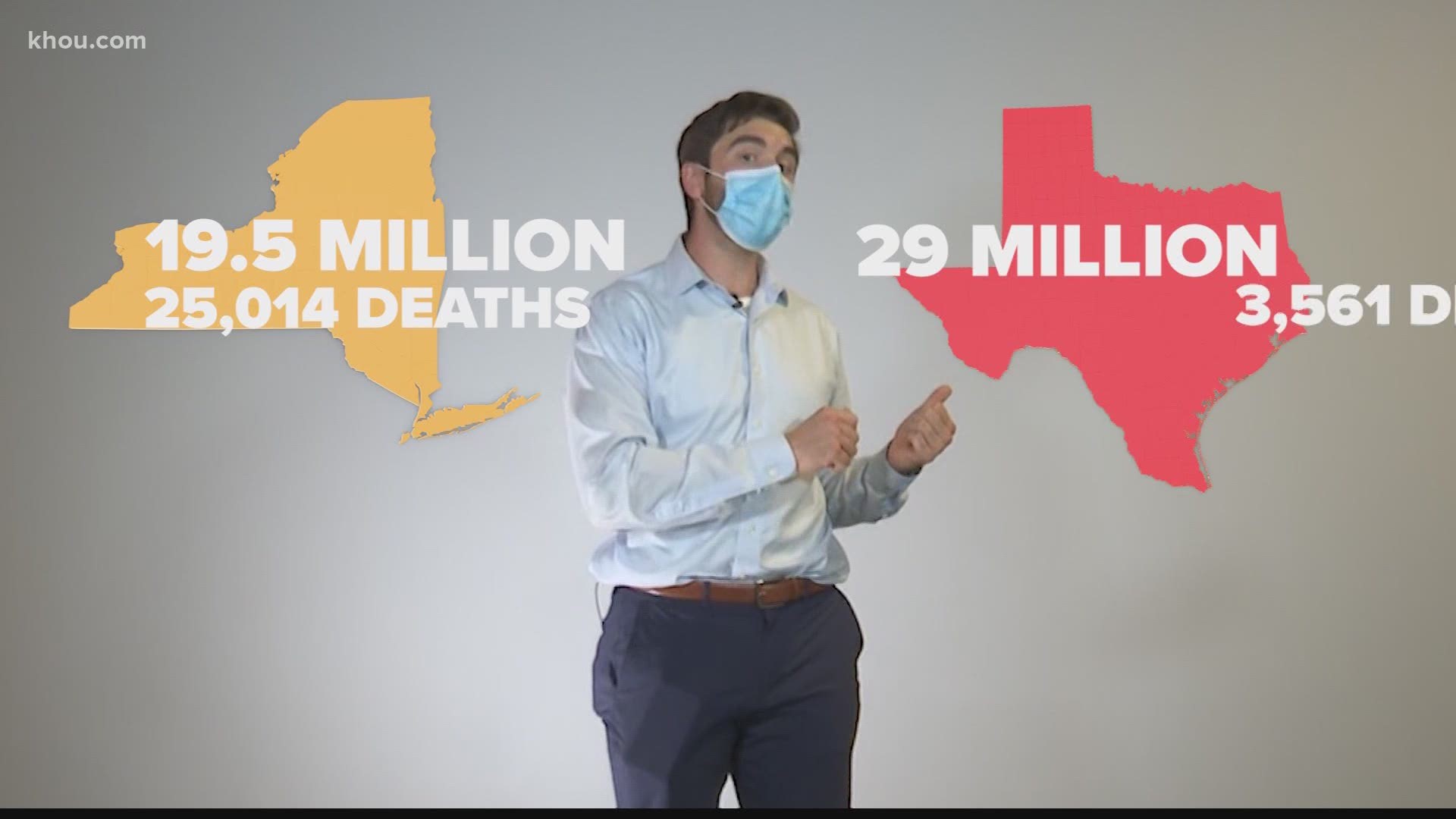 HOUSTON — COVID-19 patients in Texas hospitals are not dying at the same magnitude as patients in New York.

There are several reasons that could explain this, but one is the timing of when the pandemic hit Texas compared to New York, and the ability of Texas doctors to learn lessons on how New York doctors handled coronavirus patients.

"We got a lot of help from our colleagues in New York and Washington. Both technical expertise and my understanding is that some of the nurses that are coming to Texas are actually coming from New York and, and the New England states," said Dr. David Persse, Houston Health Authority.

A New York Times article explains that doctors in Texas have been able to avoid using ventilators or breathing tubes because they know more now about how the virus affects patients and how to care for them.

That same article, as well as a Washington Post article, mention how the antiviral drug remdesivir has performed well in more clinical trials, and doctors in Texas are now relying on the allocated shipments from the federal Department of Health and Human Services.

(2/) @MethodistHosp tells me they're expecting next shipment any day, but don't know how much they'll get. Their peak of #COVID19 patients across 7-loc hosp system: 712 on 7/12. Today, 690, which includes those who are now negative, but not recovered enough to go home. @KHOU

The delivery of the purchased remdesivir will be streamlined, going directly to the hospital, per the state’s allocation decision, rather than going first to the state health departments for subsequent delivery to hospitals.

Shipments will likely occur every two weeks, per HHS. The final allocation of Gilead’s approximately 120,000 donated treatment courses was shipped on June 29.

A Houston Methodist spokesperson said they expect to get their next shipment any day now, but they do not know how many treatment courses they will get.

RELATED: VERIFY: What is remdesivir?

Thursday, Methodist reported 690 COVID-19 patients across its seven-location hospital system. That number includes patients who now test negative, but are not recovered enough to go home.

Statewide, Texas Department of State Health Services reported a single-day record of 129 deaths, and 10,291 new cases. It was the third day in a row of more than 10,000 cases reported in a single day, and the fifth time in 11 days.

Methodist's peak of coronavirus patients so far was 712 on July 12.

The statistic is a glimmer of hope that hospitalizations could be decreasing, but as public health officials have repeated, that number hinges on people staying home as much as possible, and, if they must leave the house, wearing a mask, and staying at least six feet away from others outside their household.