Gov. Abbott told KVUE in a live interview on April 10 that any plan to reopen businesses in Texas must include strategies to prevent the spread of coronavirus. 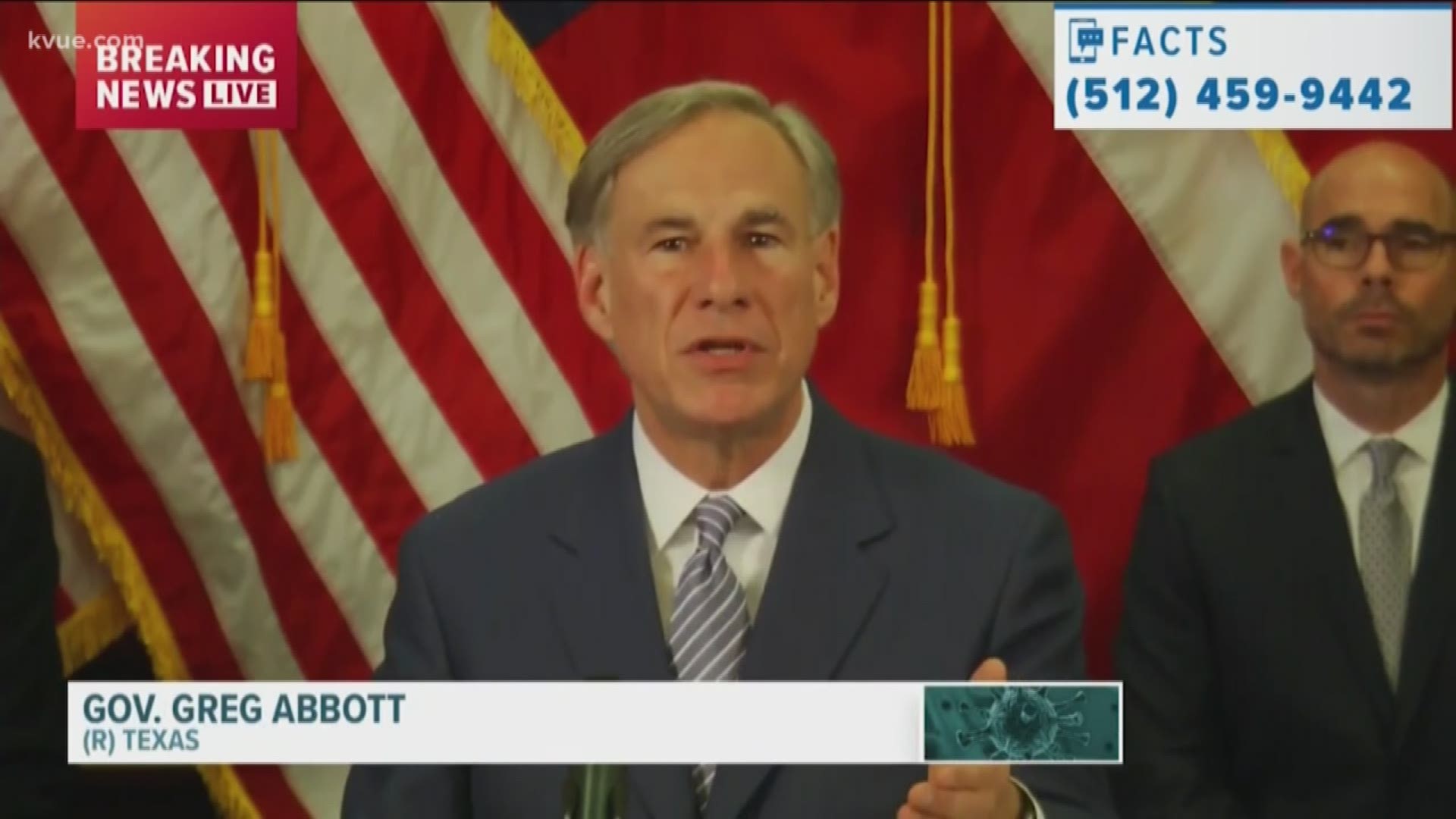 AUSTIN, Texas — Gov. Greg Abbott announced the state’s economic response to COVID-19 at a news conference on Friday, which included plans of reopening Texas businesses amid the coronavirus pandemic.

Gov. Abbott issued three executive orders outlining how the state will begin to reopen businesses. He said the plan must be guided by data and doctors to reopen Texas businesses without spurring the spread of the coronavirus.

The strike team will develop medical architecture that will allow Texas to safely reopen while waiting for the development of immunizations, according to Gov. Abbott.

Gov. Abbott the team will work with an advisory committee of Texas entrepreneurs to advise how to successfully reopen the Texas economy. Gov. Abbott said the committee will be run by Chairman James Huffines.

The governor reported he has already been working with this team to discuss how to reopen Texas businesses.

"The particular task that we have over the next several days is to help the governor and his public health advisers understand that there are many parts of Texas where probably today would be safe to open the economy," said Kevin Roberts, executive director for the Texas Public Policy Foundation. He is part of the governor's advisory team for reopening the state.

He said the team will be paying close attention to new data about the virus every day.

"The real smart thing about taking the seven- to 10-day approach and soliciting input from us on the strike force, the advisory council, is that we're going to be elevating these these ideas, these recommendations of which sectors of the economy can be reopened safely and steadily," Roberts said.

According to Gov. Abbott, the reopening of businesses will come in stages. The first stage, which goes into effect on Friday, April 17, includes the reopening of businesses that pose little to no threat of spreading COVID-19. The second stage will include additional openings after receiving additional input from medical experts. This stage is expected to come on April 27. More openings will be announced in May for the third stage once it is determined that testing capabilities are able to detect and contain outbreaks of COVID-19.

State Rep. Donna Howard (D-48) said she's in favor of getting the economy moving again, but has hesitations about moving too quickly when there isn't enough data and testing being provided.

"We're talking about 10 days looking at this again, perhaps opening more businesses, but that's before the date that we've been told we can expect to have more tests," Howard said.

Regarding elective surgeries, Gov. Abbott said that since the state has enough hospital capacity and personal protective care, effective April 22, current restrictions on surgeries will be loosened. This order also increases the standards for nursing homes and assisted living facilities.

Gov. Abbott said all stores in Texas will be able to operate "retail-to-go" starting on April 24.

Texas Parks and Wildlife Department said state parks will reopen on Monday for day use only, with overnight camping to be allowed at a later date. People will not be able to pay fees at the park – visitors must make advance reservations and pay online at www.texasstateparks.org.

The Texas Education Agency issued the following statement after the announcement:

"Following on Governor Abbott's Executive Order on schools issued this afternoon, it is important to note that while the governor's decision continues the closure of school buildings for in-person classroom attendance for the duration of the 2019-20 school year, it in no way ends at-home instructional support for Texas's millions of students.

School districts across Texas have worked diligently to make the transition to virtual learning. Students must continue to receive daily academic support from their teachers and schools for the remainder of the 2019-20 school year.

Thank you to our superintendents, principals and teachers for their leadership in ensuring that academic progress continues during this unprecedented public health crisis. We fully support your efforts."

On Monday, April 27, Gov. Abbott said additional ways to reopen Texas will be announced. Gov. Abbott said the new plans will be based on how well COVID-19 has been contained in Texas and will outline safe practices for businesses to use. Additionally, Gov. Abbott said it may also expand the availability of elective surgeries.

After the announcement on Friday, The Austin Chamber said it supports the plan to reopen the economy.

"We recognize this effort will need to balance public health considerations while restarting economic activity in a phased and gradual approach that guards against subsequent spikes in infections," said Greater Austin Chamber of Commerce CEO Laura Huffman. "While each of our communities is different, we recognize that businesses play a vital role in enacting specific measures to keep their workforce safe and thereby protecting the entire community. We are encouraged by the governor’s willingness to work collaboratively with the business community."

In a live interview on KVUE live at 6 p.m. on Friday, April 10, Texas Gov. Greg Abbott said any effort to reopen businesses in Texas must include strategies to prevent the spread of coronavirus.

What reopening Texas businesses could look like in Austin

On April 16, a group of protesters gathered outside the Texas State Capitol and the Governor's Mansion in attempts to put pressure on Gov. Greg Abbott to reopen the state's economy amid the COVID-19 pandemic.

In light of the announcement, Austin Mayor Steve Adler spoke with caution when addressing the idea of reopening businesses.

“We don't want to return back to the same place we've already been,” Adler told KVUE. “It's important to be able to open up the economy, but you have to be really careful if you do that for fear of undoing all the work that everybody has thus far been doing. The dangers are that we'll have physical interactions again while the virus is in our community and not controlled and therefore we'll have a spread of the virus that could multiply it quickly, get out of hand and overtax our hospital that leads to people unnecessarily dying."

Democratic leaders in the Texas House of Representatives also weighed in on April 16 about the plan.

"The bottom line is this: Texas needs to follow doctor's orders when it comes to fighting the coronavirus," State Rep. Chris Turner (D-Grand Prairie), chair of the Texas House Democratic Caucus, said.

The caucus is calling on Gov. Abbott to do four things before easing social distancing rules: