With all the changes expected later this week, Texans have a lot questions about Gov. Abbott's new executive orders. 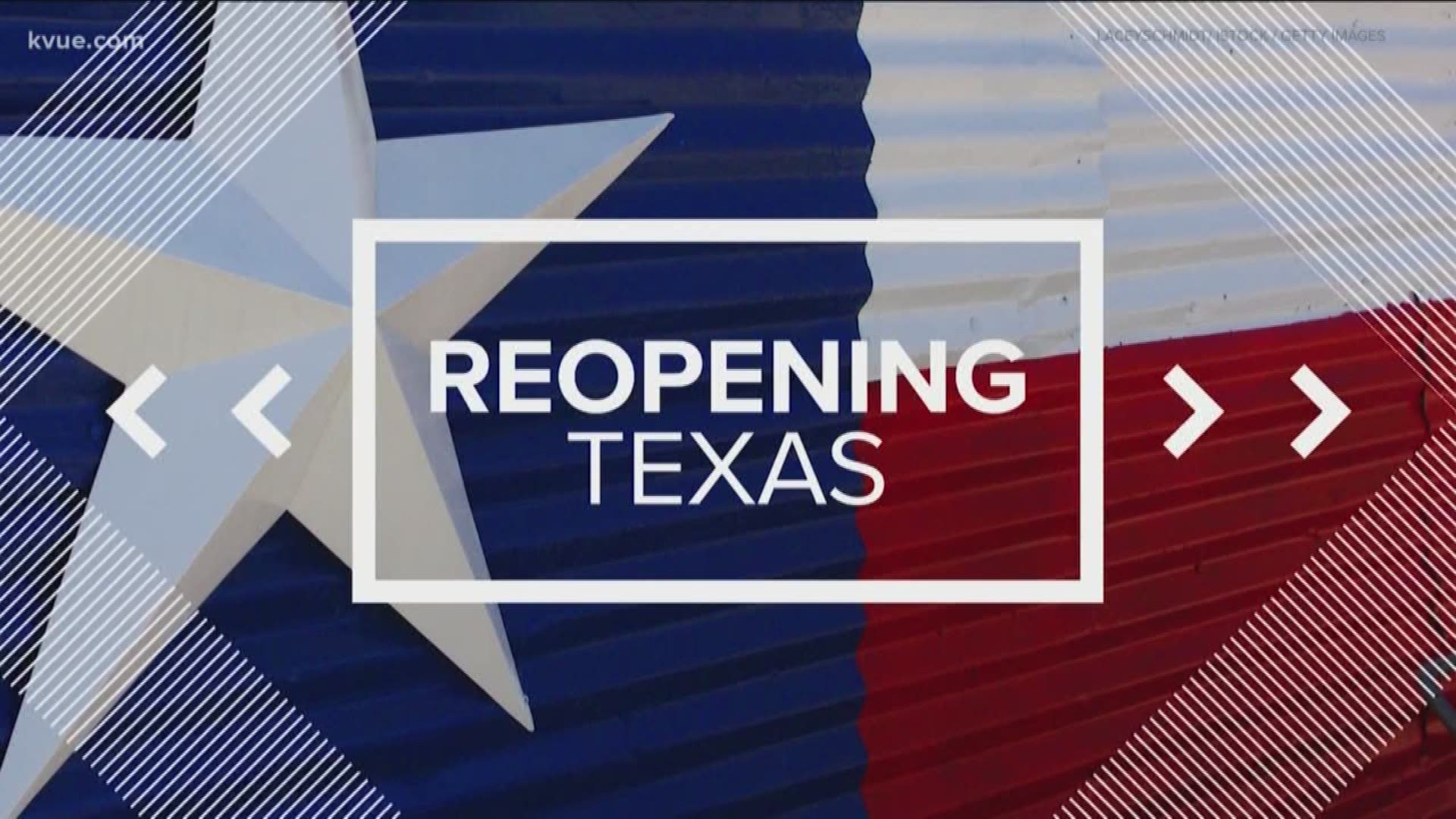 AUSTIN, Texas — The statewide stay-at-home order will expire on Thursday and many businesses will be allowed to reopen on Friday.

With all those changes, Texans have a lot of questions. KVUE set out to answer some of the most common ones.

"Why is Texas reopening?"

This one is a little subjective. While we can't speak to Gov. Greg Abbott's precise motives, he said in a press conference Monday that Texas has made strides slowing down the spread of COVID-19, hospitals have plenty of room for patients and millions of Texans need to get back to work.

RELATED: 'If you don't want to go out, don't go out' | Gov. Greg Abbott discusses his plan for reopening Texas in KVUE interview

"Are we allowed to have small gatherings in our homes?"

The governor's order still calls for social gatherings and in-person contact with people not in the same household to be minimized.

Restaurants can't have more than six people at a table. If you're planning outdoor sports, there can be no more than four people involved.

"Do I have to wear a mask if I go out after Friday?"

The short answer: No. The governor's order makes it so local governments can't enforce any masking rules, so while cities can recommend that you wear a mask, you can't be fined for not wearing one.

However, Abbott said in an interview with KVUE that he still encourages people to wear masks.

Again, there are no requirements to wear masks under the governor's order. But a restaurant could make it a policy to require their workers to wear masks, just like they could require things like a certain type of wardrobe.

"How many people can be in a church starting Friday?"

The answer depends on the size of the house of worship.

The governor's office recommends that people considered to be at risk worship remotely. If you do attend a service in person, social distancing needs to be enforced, with six feet of separation between parishioners unless they're from the same household. Every other row must be left empty.

More than one person asked about being able to go back to work in their offices or about jobs that require them to interact with other people. The governor's order specifically outlines which businesses and essential services are allowed to reopen Friday. Those include retail stores, restaurants, movie theaters, malls, museums, libraries, golf courses, local government offices and people who work alone in offices.

The governor's order states people "should implement social distancing, work from home if possible and practice good hygiene, environmental cleanliness and sanitation." So, if you've been working from home, this suggests that should still be the case.

"If I can't go to work for safety reasons, can I still get unemployment?"

One viewer whose employer is reopening reached out to KVUE and said she was told to come back to work – but her husband has an underlying health condition, so she believes going back isn't safe. She wanted to know if she can still get unemployment.

On Wednesday, U.S. Rep. Lloyd Doggett sent a letter to Abbott and the Texas Workforce Commission (TWC) asking for a rule change to address this.

"If a worker has to leave because they're not safe there, that that won't be a basis for denying unemployment compensation," Doggett explained. "I think that when there's a choice to be made, we ought to make that choice in favor of health and good science."

"When will Austin's public libraries reopen?"

Austin's public libraries have been shut down since the end of March, but Abbott's new order allows libraries to reopen at 25% capacity starting on Friday.

The City of Austin told KVUE that Austin libraries will reopen when they can do so in a way that doesn't put the health of the community or library employees at risk.

"When will hotels reopen in Austin?"

That's up to the hotels. No order or rule actually required them to close, but many did because of low occupancy rates. According to the American Hotel and Lodging Association, eight in 10 hotel rooms in the U.S. are empty and about 70% of that workforce have been laid off.

The FDA hasn't approved most of the antibody tests that are out there. Now Doggett is calling on the agency to step up.

"There's no way to tell if it's accurate. The FDA, we're calling on to do its job and to verify these tests and check on the validation data to be sure that the test really works," Doggett said.

Doggett also wants the FDA to check how companies are marketing these tests and go after businesses making false claims.

"What won't reopen on Friday?"

Salons, barbershops, gyms and bars aren't allowed to open for business just yet. But Abbott said a plan is being made and those places could be up and running as early as mid-May.

WATCH: Reopening Texas: Are offices reopening on May 1?