Houston pharmacist stuck outside U.S. after traveling on his honeymoon

Sam Aitken said he'd be an "integral part of the response" to the COVID-19 pandemic if back in the states. Instead, he and his wife are stuck in South America. 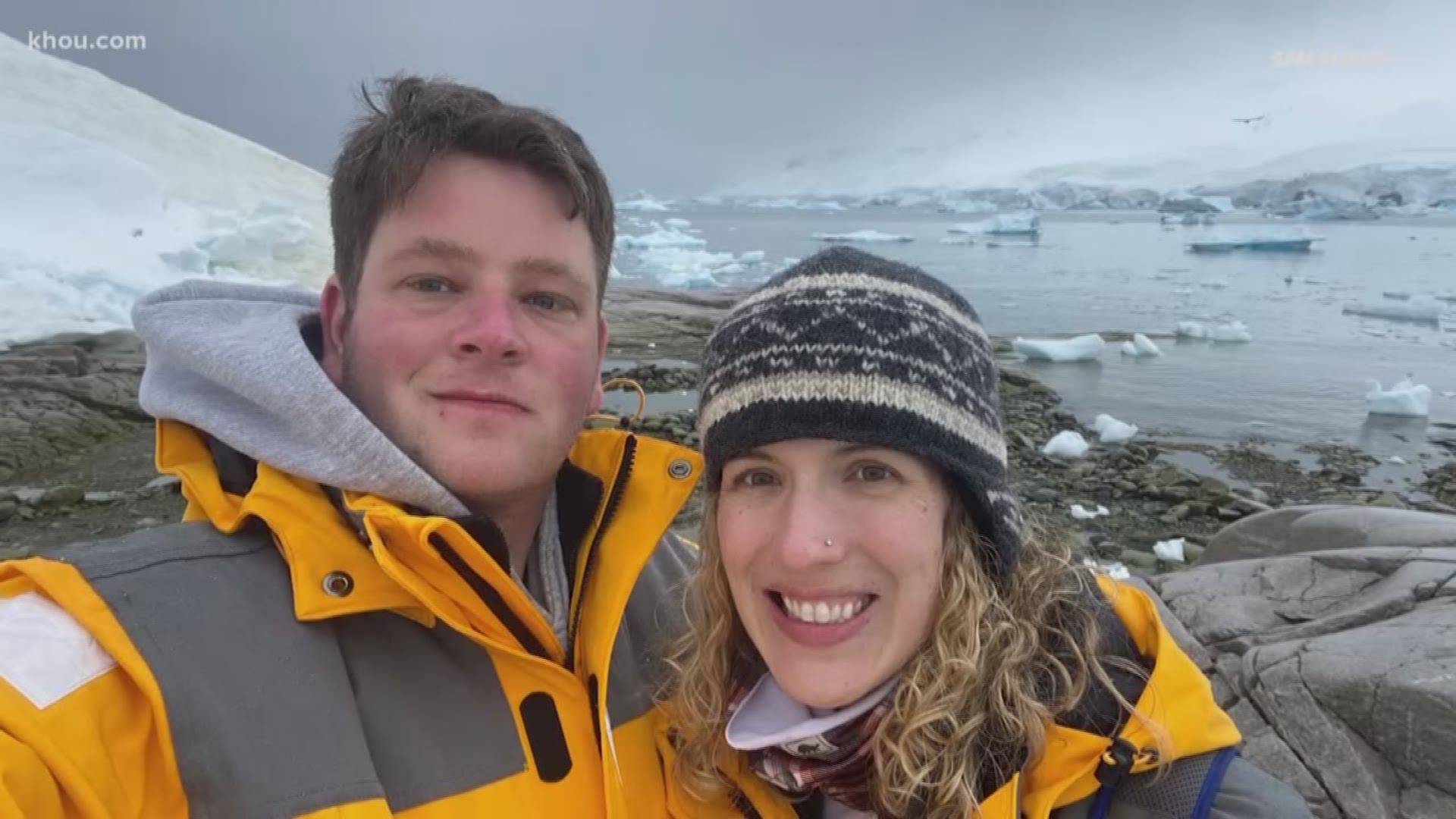 Editor's note: “The couple returned to the U.S. early Thursday morning, March 26, 39 hours after leaving their hotel in Argentina.”

You’d think being stuck on one’s honeymoon could be fun, but not when you can’t leave the hotel room, can’t travel and can’t get a flight home because of a pandemic.

And also not when you’re needed back home to help fight the very pandemic that’s stranded you and is killing people all over the world.

“If I were back in the (U.S.) right now, I would be working on developing hospital protocols for the treatment of patients with COVID-19, I'd be dealing with issues with the drug supply. I would be very much an integral part of the response to this pandemic,” said Sam Aitken, an infectious disease clinical pharmacist working at one of the hospitals in the Texas Medical Center.

Aitken and his wife, Marisa, delayed their honeymoon by two years and put an incredible amount of planning into a trip to Antarctica.

RELATED: What is an essential employee or business? 'Stay Home Work Safe' order issued for Houston

“We kind of like these cold, mountainous places with water nearby,” Aitken said. “We were looking at New Zealand and then just popped in our heads to go to Antarctica and had heard from a couple of people. It was an amazing place to go. And it absolutely is. It's incredibly beautiful. It's just a landscape that doesn't exist anywhere else on Earth. And, you know, we are maybe a little bit upset with the extended vacation, but we don't regret going there at all. It's just it was an incredible experience and it's a lifetime place to visit.”

When they began their journey in early March, Aitken said they were aware of a few cases of COVID-19 reported in Latin America, but said neither they nor many others could have anticipated the total global lockdown.

“We've had, I think, five flights canceled on us in the last 24 hours,” Aitken said Tuesday morning sitting in his Buenos Aires, Argentina, hotel room that neither he nor his wife can leave.

Aitken said the couple reached out to the U.S. embassy in Buenos Aires that told them to fly commercial.

“But like I said, it [commercial flights] sort of pops in and out of existence. So, there is no way to know whether you will be able to get the flights that you think you’re going to get,” Aitken said.

Credit: Courtesy Sam Aitken
Sam and Marisa Aitken on their honeymoon in Antarctica.

When KHOU 11 checked in with Aitken late Tuesday afternoon, the couple was at the airport hoping to board a commercial flight to Brazil and get a connecting flight to the U.S. from there.

As of Monday, the U.S. State Department estimated more than 13,500 Americans have reached out to the U.S. consulates or embassies all over the world, asking for help to return home.

In a briefing transcript posted on its website, senior state department officials who spoke to reporters estimated that in all, some 10 million U.S. citizens were living abroad. But most of them were residents of those countries and didn’t want to come back. The people who reached out for help getting back to the U.S. are considered expats or tourists who were overseas temporarily.

“We’re working around the clock to bring U.S. citizens who are stranded overseas back home,” one senior state department official said in the briefing.

“This is truly an unprecedented effort to bring Americans from every region of the world in these rapidly changing conditions on the ground,” a senior state department official said in the Monday briefing, according to the transcript available online.

While the state department has chartered flights to bring Americans home, during the briefing, officials said they encouraged travelers to try commercial airlines first, while those are still available.

“We are using in some cases – and I expect this will be happening in an expanded fashion as we go out from here – we’re using what’s called the K Fund. It’s a special fund authorized by Congress to allow us to meet unexpected emergencies. We have organized a number of flights already on the K Fund, K Fund charters, and there are going to be more of those starting today, [Monday] in fact,” one senior state department official said.

“I’m hopeful that we’re able to get out,” Aitken said. “And I’m not optimistic that will actually happen.”

RELATED: Gov. Greg Abbott: Statewide shelter in place 'not appropriate' at this time