Mayor Steve Adler joined KVUE Daybreak to talk about the virus after the Thanksgiving holiday. 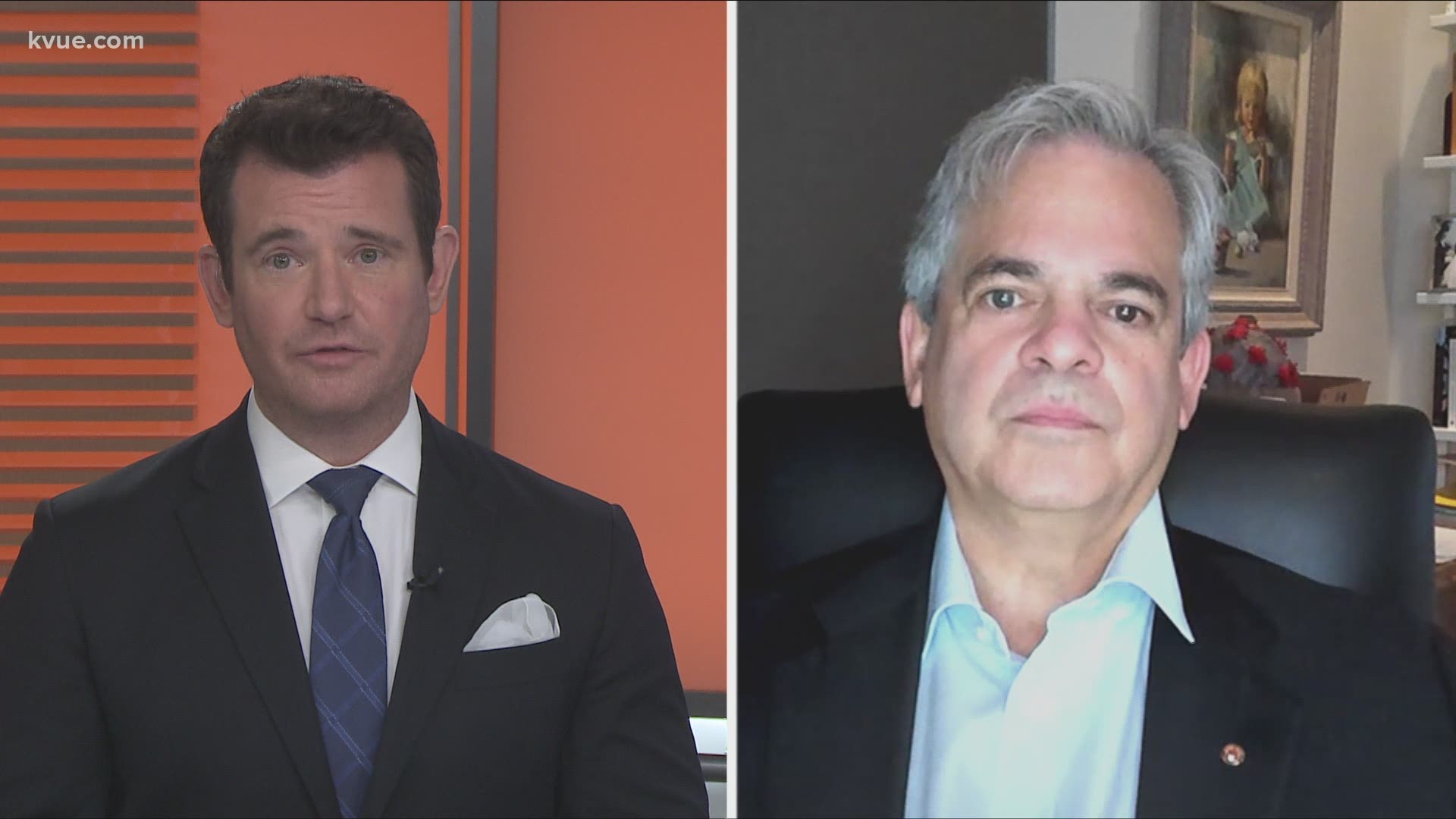 AUSTIN, Texas — Thanksgiving has come and gone and now Dr. Anthony Fauci is warning of a surge on top of a surge after the holiday.

According to Austin Public Health, 332 new cases were reported on Nov. 30. You can see the spike on the blue bar graph below. The dark blue line shows the seven-day average with a slight uptick at the very end.

Austin Mayor Steve Adler joined KVUE Daybreak on Dec. 1 to talk about the impact this could have locally. Here's what he told KVUE's Mike Rush in a Q&A.

Question: Health officials and others were really driving home the point that we needed to stay home for Thanksgiving, but at least anecdotally, it appears that a lot of people weren't listening. That Austin airport report about the busiest day since the pandemic – just on Sunday, more than 12,000 people flying out. So what kind of a surge, if any, are you expecting after this Thanksgiving?

Adler's response: "We don't know. We anticipated that a lot of people would be around other people on Thanksgiving. The goal was to drive that number down as low as we possibly could. We don't know what it's going to look like and we're not going to know for another week to 10 days. Our fingers are crossed that that it's not going to be a significant surge on top of a surge. But again, we don't know. We just have to be prepared. You know, this community does have a lot of control over what happens to us by our behavior. And people are wearing masks a lot in this community. We've actually driven the numbers down here over the last several days. And we don't know yet if that's because people during Thanksgiving just don't want to go to the hospital when they should. And if they should, they should actually go. So it's kind of a wait-and-see situation where we're poised to act, but urging everybody. In the meantime, if you went away and you were around other people, please get tested. If you went away and you were around groups of people, please stay home for seven days is what we're asking people to do to see if that virus manifests.

Question: Austin-Travis County is in Stage Four in the COVID-19 risk-based guidelines. It only goes up to Stage Five. Do you see that increasing to stage five any time soon?

Adler's response: Again, we don't know the answer to that. But what we do know is as a community, we can control that. We went to Stage Four orange. We went there a little bit early urging people to not be in groups, urging people to wear masks any time they're out of the house around people not in their family unit, even if it's friends or another family, because we're trying to avoid going to red. That's our best chance of keeping businesses open and schools open, which means we have to show that level of discipline. But we're looking at cities and states all over the country, parts of Texas, where the communities are not doing the discipline thing and they're and they're paying for it right now. And then Austin can and should do better. We need to do better.

Question: Austin is about 9% right now with COVID-related hospitalizations. If we get to 15% for a certain period of time, then that's going to be trouble. So is the convention center still prepared to be an overflow hospital just in case that sort of thing happens?

Adler's response: The convention center is prepared to take low acute cases to free up space in our hospitals if we need it. And we'll see that number of percent of occupancy in our hospitals with COVID-19 patients is right now in Austin, among the lowest of any big city in the state. A lot of cities are above the 15% that the governor said requires more drastic action. Let's keep our numbers low. Let's keep the number low so we can keep schools open.

Question: How does Austin go about securing the vaccines that we need in our community?

Adler's response: It is wanted everywhere. And the distribution of that is primarily going to be set at the national level and the CDC guidelines. With respect to who gets that, you know, they're going to start shipping that, I think, in December within days of getting the approval. If that approval comes to vaccines up for approval in December, we could have two different kinds of vaccines getting here. In December, they're going to go first. We're not going to get very much of it, very limited supply. So we're going to give it to the front line health care workers that are in and around, people that are infected because they're the ones that are most at risk. And we need them, frankly, to stay healthy for the rest of the community and that over time you're going to start getting it out to first responders.

Question: Let me ask you how that process works because these are so sought after, these vaccines, and because everybody needs them all over the world. What do you do as the mayor? I mean, do you lobby with the governor or somebody on the federal level to say, 'Hey, you know, we could use this much, or can you get us this or get us that?' How does that work where you can make sure that we get recognized as a community here, too?

Adler's response: We're certainly lobbying, although I'm not sure that it's going to do any of us mayors any good to actually be lobbying because the rules that set out the distribution of that vaccine are going to be set nationally and uniformly applied across the country. There may be some discretion at the state level as the supplies are coming in. That's unclear at this point. But we have stood up in this community right now, a regular weekly meeting of about one hundred and fifty stakeholders that are involved in the distribution of the vaccine and has been meeting for some time now. So we're both anxious to get our share of the supply, but setting up the systems so that when it does come into the city where we're able to and it's been found to be safe, we're able to distribute it also.

‘My world, my everything’ | Family, friends stunned over the death of Instagram influencer Alexis Sharkey