A labor and delivery unit -- once full of babies and new beginnings -- is now the place where critically ill COVID-19 patients are treated at Methodist Hospital. 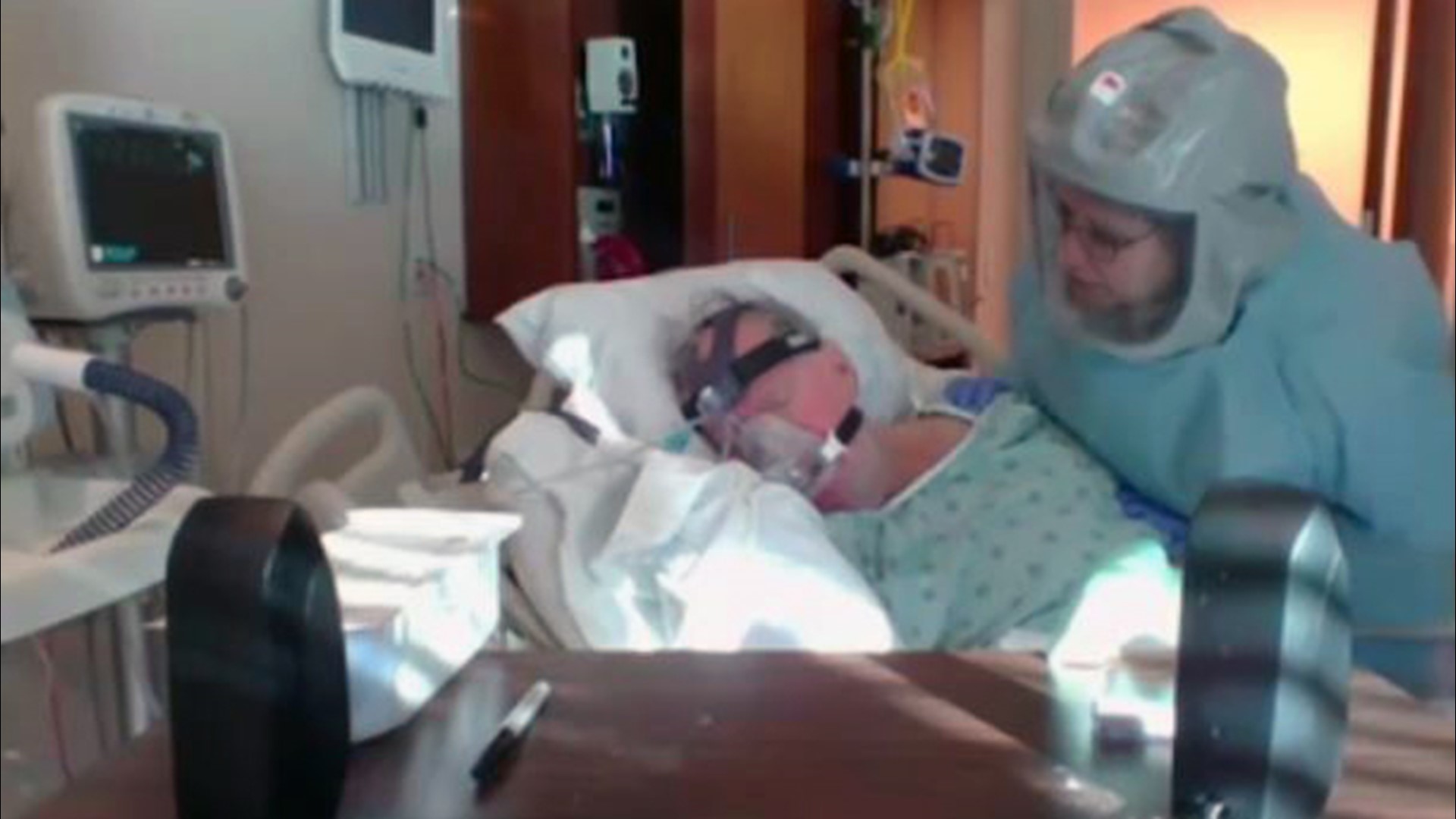 HOUSTON — When Methodist Hospital in Katy set up a new Highly Infectious Disease Unit to treat coronavirus patients, they asked for volunteers to staff it.

Doctors, nurses and therapists from all over the hospital answered the call, knowing it would be one of the hardest things they would ever do, knowing they were risking their lives.

One of them was Tabatha Kentner, a registered nurse.

On Sunday, March 29, Kentner was assigned to care for 93-year-old Richard Steubinger from The Woodlands.

Steubinger, a Navy veteran who served in World War II, quickly won over the hearts of Kentner and her co-workers who lovingly called him “Grandpa.”

“We don’t just take care of them, we care for them like they’re our families,” Kentner said. “I don’t think there’s a bigger responsibility then to stand at that bedside and make sure that patient knows that his family loves him and haven’t forgotten him and that we’re here in their place.”

On that Sunday, Steubinger was having a good day.

“I was super optimistic that we were making a turn in the right direction,” Kentner remembered.

She bonded with Steubinger’s daughter Shawn Creswell during phone calls to update her on his condition.

“She wanted to know more about my dad,” Creswell said. “She wanted all of the names of his kids and grandkids, and she talks to him and just whispered in his ear those names to  give him that comfort.”

Creswell shared stories about her dad with Kentner, including those about his love life.

“And I said, ‘Mr. Steubinger, I hear you have a girlfriend,’ and he was smiling,” Kentner said, smiling at the memory. “And I said, ‘I heard her name is Georgia,’ and he snapped his head up and said ‘Well, yes it is!'”

By Tuesday, everything had changed. Steubinger’s fever spiked and they were forced to put him back on a biPap ventilator.

“It was really disheartening,” Kentner remembered. “There’s not much more we could do … so they called the family.”

Family members aren’t allowed inside hospitals, but heroic nurses and doctors worldwide are determined to make sure their patients don’t die alone.

“Shawn asked me to be there for her dad and just stand in for her family and to make sure he wasn’t alone,” Kentner said. “It was an honor. This is what we do. This is why we’re here.”

“This is heartbreaking for all of us not to be there,” Creswell said. “They set up a meeting with us and we were all on there, so he got to see every one of his kids and grandkids and everyone got to give a message to him.”

Creswell told him she would see him when her time here was done.

Richard “Grandpa” Steubinger’s time was done on Wednesday, April 1. Kentner was by his side when he took his last breath.

When they wheeled him out, everyone stopped what they were doing and stood in silent tribute to “Grandpa.”

It’s a scene repeated daily in hospitals everywhere. And it’s often the only source of comfort for the loved ones left behind.

“Richard woke up every day with a big smile and always found ways to serve others,” his obituary said.

That big smile was evident in photos with his five children, 10 grandchildren and seven great-grandchildren.

The family is forever grateful to Kentner and all the others at Methodist who cared for Steubinger until the end.

“I’ve never experienced any type of care like this ever before. Never,” Creswell said. “Tabatha’s having to be my dad’s family, and that’s giving us peace and comfort and we love her dearly.”

Someday, they hope to meet her and hug her and thank her.

Photos: Behind the scenes at Methodist Hospital Katy's COVID-19 unit

1 / 23
Methodist Katy
When Methodist Hospital in Katy set up a new COVID-19 unit, they asked for volunteers to staff it. Doctors and nurses from all over the hospital volunteered.

We spent a day inside the Highly Infectious Disease Unit (HIDU), where we are treating many COVID-19 patients from the community. What did we see? Incredible acts of bravery, love and compassion from our entire staff. Follow their journey and see how our amazing employees are caring for our community’s most vulnerable. This video is dedicated in loving memory to Richard Steubinger.