The jury concluded Arkema officials were responsible for the release of the toxic cloud over the Crosby community during Harvey, prosecutors announced Friday. 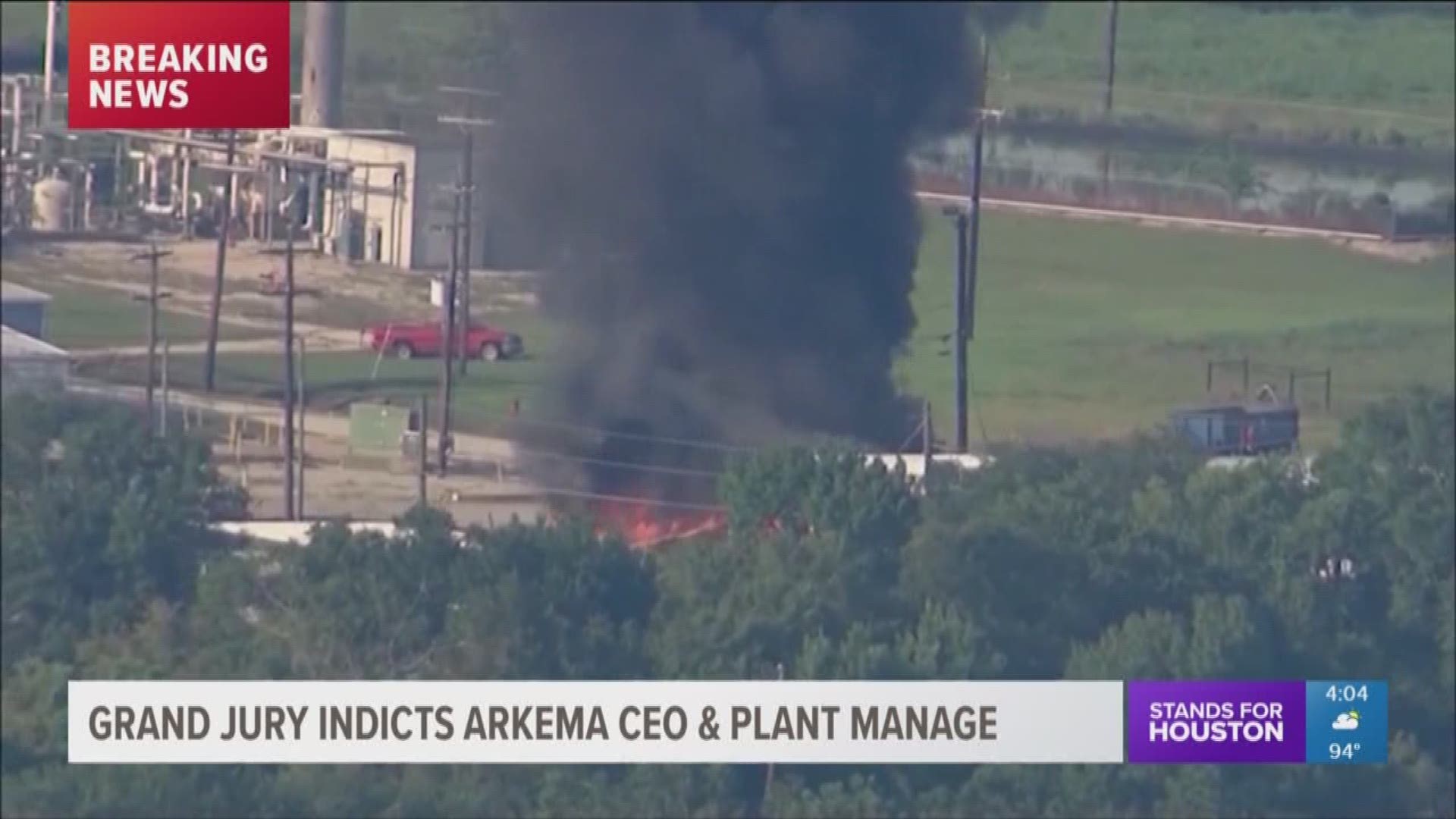 CROSBY, Texas - A grand jury has indicted Arkema officials for the chemical explosions that occurred during Hurricane Harvey, according to District Attorney Kim Ogg's Office.

The grand jury has indicted Arkema North America, a French-made major chemical manufacturer, along with its CEO and plant manager.

The jury concluded they were responsible for the release of the toxic cloud over the Crosby community during Harvey, prosecutors announced Friday.

“Companies don’t make decisions, people do,” said D.A. Kim Ogg. “Responsibility for pursuing profit over the health of innocent people rests with the leadership of Arkema.”

“Indictments against corporations are rare,” Ogg said. “Those who poison our environment will be prosecuted when the evidence justifies it.”

The indictment says they all had a role in “recklessly” releasing chemicals into the air, placing residents and first responders at serious risk.

The charge carries penalties of up to five years in prison and up to a $1 million fine for the corporation.

On August 31, 2017, chemical explosions at the company's Crosby facility began around 2 a.m. and continued for several days. Nearly half-a-million pounds of liquid organic peroxides were stored at the facility.

The organic peroxides must remain cool, but because of the hurricane, the plant flooded under six feet of water.

The company said at the time that triggered a chain reaction of failures that allowed the chemicals to heat up and explode, releasing smoke into the air.

Prosecutors allege the disaster could and should have been prevented.

“As the hurricane approached, Arkema was more concerned about production and profit than people,” said Alexander Forrest, chief of the Environmental Crimes Division at the Harris County District Attorney’s Office.

"Today we were informed that a Harris County Grand Jury issued an indictment against Arkema Inc., Rich Rowe and Leslie Comardelle for events that took pace as a result of Hurricane Harvey. These criminal charges are astonishing, especially since the U.S. Chemical Safety Board concluded that Arkema behaved responsibly.

· The Arkema Crosby site had plans, procedures and multiple contingency measures to prevent loss of power and refrigeration, and was prepared for a 100-year and a 500-year flood.

· Arkema’s plant met all requirements related to flood planning, and there simply are no requirements or guidance that would have been enough to prevent the incident in the face of such unexpected flooding.

· Arkema was transparent, notifying emergency responders well in advance, warning them about potential hazards, sharing information about chemicals at the facility, and communicating with the public through many channels.

It is also worth noting that the Harris County Flood Control District reported that the volume of rain that fell on the area around our plant had a probability of occurring only once every 5,000 to 20,000 years.

With these findings, it is outrageous to assert that Arkema or any of its employees behaved criminally. No one needs a reminder that Hurricane Harvey devastated a wide region. It overcame the preparedness efforts of millions of individuals, and many, many companies and government agencies. It is hard to believe anyone would seek to criminalize the way in which one facility was impacted by such a crushing natural disaster.

Arkema employees in Crosby performed heroically before and during Hurricane Harvey. We stand by these employees, who like so many others in Harris County are still working hard to recover from Harvey and get back to normal life. We will fight with great determination against this unwarranted action against our Company and its leaders.

"There has never been an indictment like this in Texas or any other state. The DA’s office has no legal precedent in Texas courts and there are no cases on point. And they chose to use this unprecedented charge for a tragedy in which the company and its employees were victims of an unforeseen and horrific event just like everyone else in Harris County. All the experts agreed this was an Act of God of biblical proportions, never before seen and never anticipated by anyone.

It would set an ominous precedent if a company could be held criminally liable for impact suffered as a result of the historic flooding of Hurricane Harvey that no one, including Harris County itself, was prepared for. In any event, there’s no foundation for a criminal case against Arkema. Certainly, it would be hard to assert that the company was criminally unprepared, after U.S. government investigators concluded that Arkema’s Crosby site had redundant preparedness measures, and the capability to hold steady in the face of a 500-year flood.

The Harris County Flood Control District has concluded that, in the area of Arkema’s Crosby plant, Harvey was a 5,000-year storm to a 20,000-year storm. It was only when faced with the worst tropical rainfall event ever recorded in U.S. history - one that overwhelmed an entire region - that the Arkema facility was overcome. It’s hard to imagine any reasonable, objective person calling that criminal.

Ultimately, in pursuing these charges against Arkema, Harris County will have the daunting task of trying to prove that Arkema anticipated the possibility of six feet of floodwater and then decided not to prepare for it. This will prove to be impossible, because it’s not what happened. In fact, federal investigators have said repeatedly that Arkema did not believe such flooding was possible at its Crosby site. The report issued by those investigators shows very clearly that Arkema went to remarkable efforts to keep the site and community safe in the face of overwhelming flooding."

A statement was also released by the attorneys representing Arkema's President and CEO, Rich Rowe:

"Rich Rowe is the President and CEO of Arkema Inc. In this capacity, he oversees the operations of 33

facilities throughout the United States and abroad, including six Gulf Coast facilities that were impacted

in one way or another by Hurricane Harvey.

Among those was Arkema’s chemical plant in Crosby, Texas, which had not experienced any significant flooding since it was built in 1960. That 57-year record came to an abrupt end during the last week of August 2017, when the Crosby Plant experienced unprecedented flooding caused by the most devastating rainfall event ever to hit the United States.

Arkema, Rich Rowe, and Leslie Comardelle, the Plant Manager of the Crosby facility. This was done in

The Indictment charges Mr. Rowe with reckless violations of the Texas Water Code, a law that

specifically recognizes and provides an exception for events caused by Acts of God. Texas law defines an Act of God as an unanticipated and unprecedented event that could not have been avoided by the

exercise of reasonable care or planning. If the historic flooding caused by Hurricane Harvey doesn’t

qualify as an Act of God, nothing does.

Harris County’s suggestion that an individual person committed a crime by not predicting the full scale of this horrific national disaster ignores the law, industry standards, and common sense, and is nothing short of an insult to the millions of people whose homes, lives, and families were changed forever by the storm.

the events at the Crosby Plant—Arkema’s crew who rode out the storm on site performed heroically,

500-year flood. But this storm far surpassed those levels, and no reasonable efforts could have stopped

While Mr. Rowe proudly leads the women and men who are the Arkema family, Acts of God are outside

of his domain, and he will vigorously defend these baseless claims against him."

In May, the U.S. Chemical Safety and Hazard Investigation Board released their final report on the explosions.

You can read their full report here.