Bart Whitaker will now serve life in prison without the possibility of parole, the governor's office said Thursday evening. 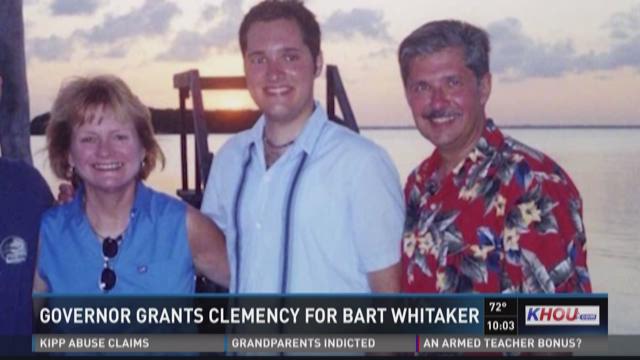 HUNTSVILLE, Texas - Governor Greg Abbott today issued a proclamation commuting the death sentence of convicted killer Bart Whitaker following a recommendation from the Texas Board of Pardons and Paroles.

Whitaker will now serve life in prison without the possibility of parole, the governor's office said Thursday evening.

The Texas Board of Pardons and Paroles voted unanimously on Tuesday to commute the sentence of Whitaker to life in prison for plotting the murder of his mother and brother in 2003.

"One of the blessings that is going to come from this, for me, is that as time goes by perhaps (Bart) will earn the privilege of having an open visit where I'll be able to actually hug him and shake his hand. And that hasn't happened since June of 2004; so I'm really looking forward to that." said Kent during the press conference.

According to court records, Whitaker offered to take responsibility for the killings and accept life sentences but his attorneys said prosecutors rejected it because it contained no expression of remorse for the shooting deaths of his mother, Patricia Whitaker, 51, and his brother, Kevin, 19, at the family's Sugar Land home.

Kent was shot but survived. The justices provided no explanation for their refusal.

Evidence showed Whitaker orchestrated the plot and that it was at least his third attempt to kill his family. As part of the scheme with two friends, Whitaker was shot in the arm to draw attention away from him.

The gunman, Chris Brashear, pleaded guilty in 2007 to a murder charge and is serving life in prison. Another man, Steve Champagne, who drove Brashear from the Whitaker house the night of the shootings, took a 15-year prison term in exchange for testifying at Whitaker's trial.

Investigators said they made the shooting look as though the family had interrupted a burglary when they returned from a dinner to celebrate Whitaker's graduation from Sam Houston State University in Huntsville. Whitaker never graduated.

The following is the full statement from Governor Greg Abbott issued Thursday evening:

“As a former trial court judge, Texas Supreme Court Justice and Attorney General involved in prosecuting some of the most notorious criminals in Texas, I have the utmost regard for the role that juries and judges play in our legal system. The role of the Governor is not to second-guess the court process or re-evaluate the law and evidence. Instead, the Governor’s role under the Constitution is distinct from the judicial function.

The Governor’s role is to consider recommendations by the Texas Board of Pardons and Paroles, and view matters through a lens broader than the facts and law applied to a single case. That is particularly important in death penalty cases.

In just over three years as Governor, I have allowed 30 executions. I have not granted a commutation of a death sentence until now, for reasons I here explain.

The murders of Mr. Whitaker’s mother and brother are reprehensible. The crime deserves severe punishment for the criminals who killed them. The recommendation of the Texas Board of Pardons and Paroles, and my action on it, ensures Mr. Whitaker will never be released from prison.

The decision of the Texas Board of Pardons and Paroles is supported by the totality of circumstances in this case. The person who fired the gun that killed the victims did not receive the death penalty, but Mr. Whitaker, who did not fire the gun, did get the death penalty.

That factor alone may not warrant commutation for someone like Mr. Whitaker who recruited others to commit murder. Additional factors make the decision more complex.

Mr. Whitaker’s father, who survived the attempt on his life, passionately opposes the execution of his son. Mr. Whitaker’s father insists that he would be victimized again if the state put to death his last remaining immediate family member. Also, Mr. Whitaker voluntarily and forever waived any and all claims to parole in exchange for a commutation of his sentence from death to life without the possibility of parole.

Moreover, the Texas Board of Pardons and Paroles unanimously voted for commutation. The totality of these factors warrants a commutation of Mr. Whitaker’s death sentence to life in prison without the possibility of parole. Mr. Whitaker must spend the remainder of his life behind bars as punishment for this heinous crime.”

Sugar Land father fights to save son from death row