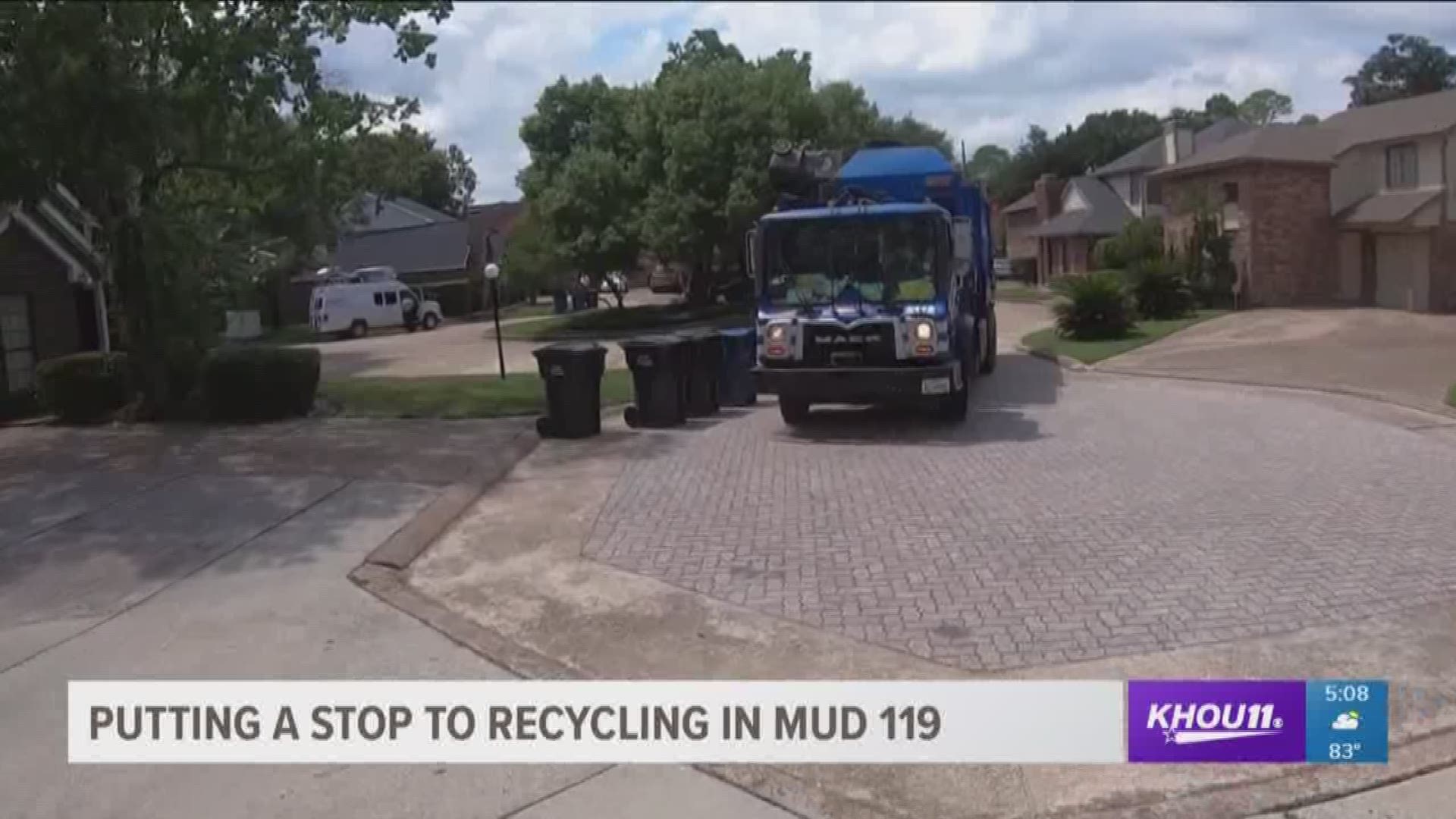 Houston — Recycling is coming to an end for some residents in northwest Harris County.

This comes after the board for Municipal Utility District 119 voted unanimously to end the recycling program on Aug. 16.

Some residents are upset by the changes because they do their part to recycle. But next month they’ll say goodbye to their recycling bins.

For instance, it’s trash day at Inwood Courts. The garbage truck going door-to-door scooping up bins filled with trash that have been rolled out onto the street.

Nora Villarreal preps her recycling bin to get picked up on Wednesday.

“I just dumped a whole bunch of stuff this morning so it’s ready to go for tomorrow," she said.

The trucks will make the rounds again.

“I think recycling is one of the best things that we could do for our planet," Villarreal said.

However, that will soon change.

“What can I do?” Villarreal said.

Residents in the four neighborhoods were informed the recycling program was being discontinued via a flyer in this month’s utility bill.

“I’m not happy about that at all, because I recycle, and a lot of people here do," she said.

Residents like Robert Howard think the program is a good idea.

“I’m not sure if the MUD district is going to pick it up if I put it in something else, so it’ll go in the brown container like it did before they started this,” Howard said.

Christopher Richardson, an attorney with Strawn & Richardson PC, represents MUD 119. Richardson said the decision was made because recycling costs to the district have gone up.

He said a number of districts don’t have recycling program at all.

He said it is an unfortunate reality the cost of recycling is on the rise throughout Texas.

In addition, the United States exports some of its recycling to China, but they’ve changed their rules as to what they will buy.

Villarreal said the changes aren’t going to stop her from recycling.

“I’m just going to have to make the drive whatever I can to recycle, because I have to do what I have to do," she said. "I’m not going to throw it in the regular trash for it to go in the landfill.”

MUD 119 residents will see a reduction in their invoices once these changes go into effect.

The recycling program will end on Sept. 12. Recycling bins will be picked up that day.