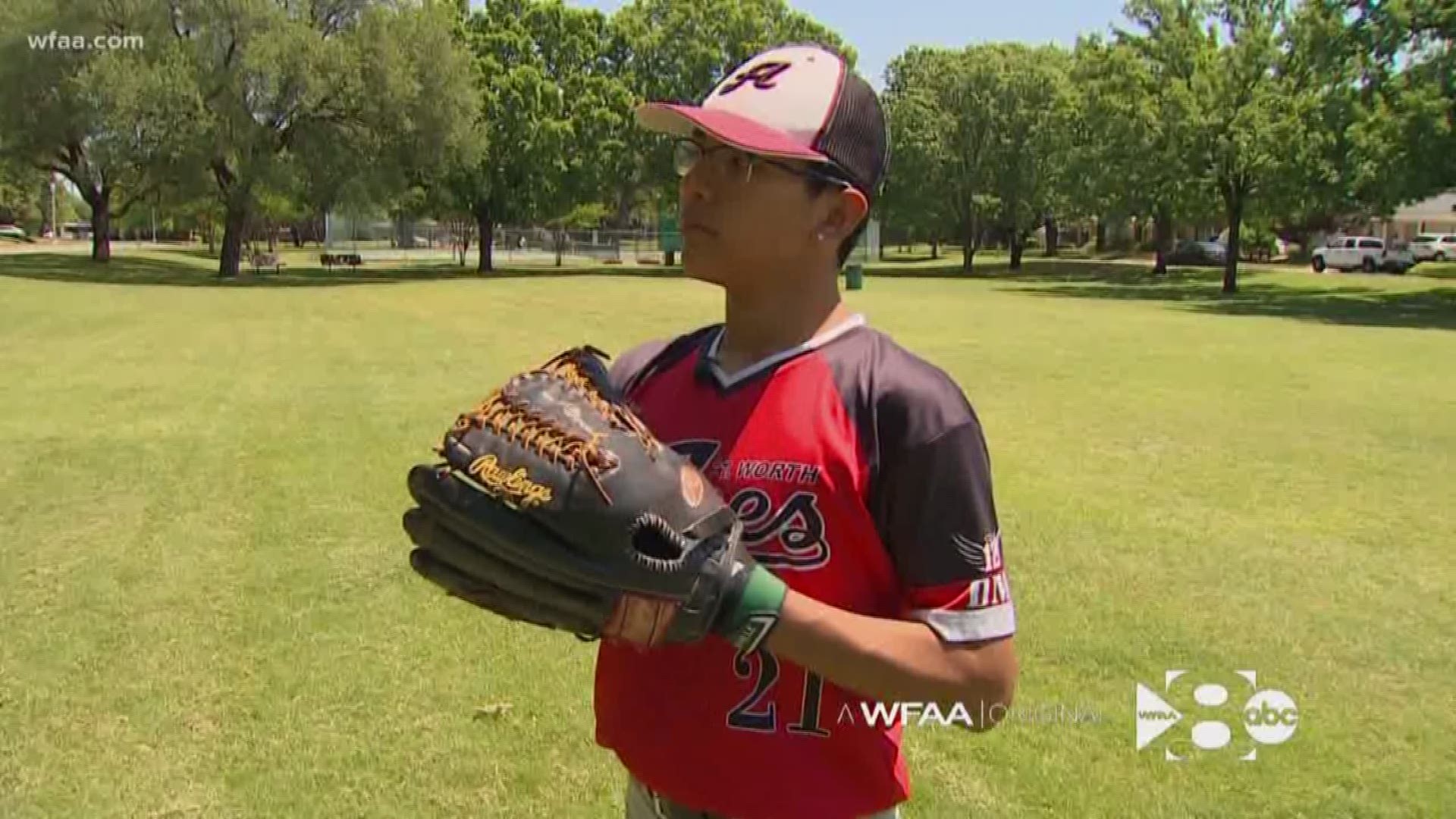 For Cruz Ramos, there is no better sound than a baseball landing squarely in his mitt, no better feeling than the one he gets playing ball.

"Honestly, I want to make it to the major leagues. That'd be a dream come true," Cruz said.

It's a dream he's had since he was old enough to throw, but life threw a curve ball right back at him. "It was horrible," recalled mom Cecilia."It was just a freak accident. You never think something like that would happen."

Cecilia remembers it better than Cruz does. He was just five years old when he was riding an escalator at an Arlington mall and his finger got caught.

"He was just yelling 'my finger, my finger!' I was screaming, yelling for help," she said.

It was his right hand -- his throwing hand.

"We have to amputate it. And that was just the most devastating feeling," Cecilia remembered the doctors saying.

The family was told a traditional prosthetic wouldn't work for Cruz. It would be too rigid and breakable for sports, and at $1,000, too expensive to keep replacing if he broke it The outfielder adjusted to throwing without his pointer finger. But the more competitive the playing got, the more his missing finger became an issue.

"Since that finger wasn't there, it always would slip out the side or go somewhere else that I really didn't want it to go," Cruz said. "I was always afraid I'd mess up and get benched or not get as much playing time."

Unbeknownst to Cruz, after all these years, his solution was right within his grasp. His mother works at UNT Health Science Center for Dr. Todd Dombroski in the biomechanical medicine rehab lab.

"We do braces, we do traumatic brain injury assessments," Dr. Dombroski explained.

What they're really known for is making prosthetics using a 3D printer. It's a skill the doctor learned in the military in Iraq and Afghanistan. Dombroski met Cruz one day when Cecilia brought him to work and it clicked.

"I looked up and he didn't have an index finger. So I said, 'well, I can replace that for you.' And he says, 'well, no you can't, I was told it would never be replaced.' I'm like, 'well, not with a real finger, yeah. But I can replace it with a 3D finger."

So his team of biomedical engineers got to work, designing and printing a 3D finger for Cruz.

The finished product-- three pieces connected by bolts-- bends and moves seamlessly, just as a typical finger would. 3D printing, they say, has the potential to revolutionize prosthetic limbs.

And perhaps the best part? The whole thing cost just $12. It was a small price to pay to breathe life back into his lifelong dream.

"When I first saw him put it on—it just brought tears to my eyes," Cecilia said.

We asked Cruz what he thought about the fact it was created using a 3D printer. "I didn't even know," he laughed. "I thought those were makeup, but they're real."

"I thought it was on only on Grey's Anatomy," Cecilia said. "I was like, are you sure you have a 3D printer? It was super cool."

Not only was it cool, but it also worked, too. Family friend and former Texas Ranger Jeff Frye, who's helping Cruz perfect his game, says it's easy to see the 3D finger fix is a game changer. "You're throwing better than the last time I played catch with you," he said during a recent game of catch.

"I played without a finger for so long and now that I have it, it just feels a lot better. I feel like I have control of the ball," Cruz said.

He's now able, once again, to throw himself fully into his future.

UNT Health Science Center says they will soon make the outlines for the prosthetic finger available online so anyone with a 3D printer can make one.