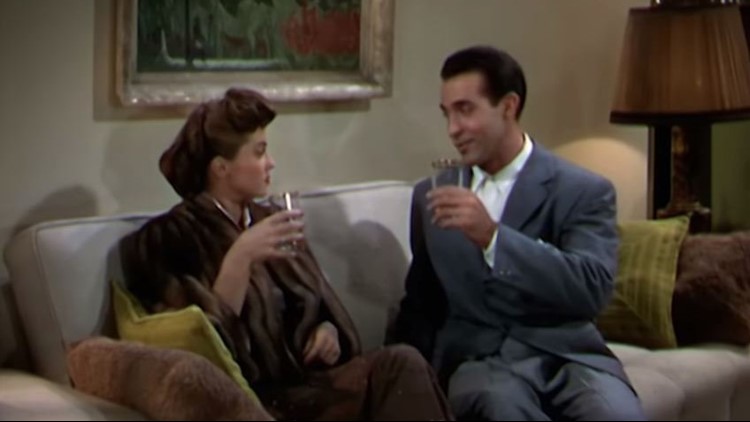 Photo by: Metro-Goldwyn-Mayer
A scene from Neptune's Daughter, a 1949 musical romantic comedy film released by Metro-Goldwyn-Mayer. In this scene, Esther Williams and Ricardo Montalb&aacute;n sing the popular Christmas tune, "Baby, it's cold outside."

'It's not a date rape song': 'Baby, It's Cold Outside' composer's daughter speaks out

The 1944 holiday song has become increasingly controversial in the past few years. Debate sparked again last week, after a radio station in Cleveland announced they would no longer play it and several other stations around the country followed suit.
Author: Hannah Yasharoff (USA TODAY)
Published: 11:43 AM CST December 7, 2018
Updated: 3:00 PM CST December 7, 2018

The "Baby, It's Cold Outside" controversy continues.

The daughter of the song's original composer is speaking out about against critics of the song, arguing that her father, Frank Loesser, had no ill intentions when writing it.

"Bill Cosby ruined it for everybody," Susan Loesser, 74, told NBC News on Thursday. “Way before #MeToo, I would hear from time to time people call it a date rape song. I would get annoyed because it’s a song my father wrote for him and my mother to sing at parties. But ever since Cosby was accused of drugging women, I hear the date rape thing all the time."

The 1944 holiday song has become increasingly controversial in the past few years. Debate sparked again last week, after a radio station in Cleveland announced they would no longer play it and several other stations around the country followed suit.

Some argue the lyrics have not aged well in the aftermath of #MeToo, like the woman telling the man "no, no, no" and asking "what's in this drink?"

Loesser said her father would have been "furious" at the radio stations' decision.

"I think it would be good if people looked at the song in the context of the time," she said. "People used to say 'what’s in this drink' as a joke. You know, 'this drink is going straight to my head so what’s in this drink?' Back then it didn’t mean you drugged me."

"Saturday Night Live" previously linked the song to Cosby in a December 2015 episode that aired just days before the comedian, accused by 60 women of drugging and assaulting them, was charged with criminal sexual assault. The sketch depicts Cosby (Kenan Thompson) in one of his signature sweaters singing "Baby It's Cold Outside" while sitting with a woman on a couch.

"Say, what's in this drink?" asks the woman, played by Tina Fey.

"Oh, well there's vitamins for when you're, like, bummed out about your career," Thompson's character explains. "Or just to make you smile and help you reach your goals."

"Yeah, something's up with that," she counters, before handing him her drink and walking out.