"Please be advised that the Needville ISD will not allow a student demonstration during school hours for any type of protest or awareness!! Should students choose to do so, they will be suspended from school for 3 days..." 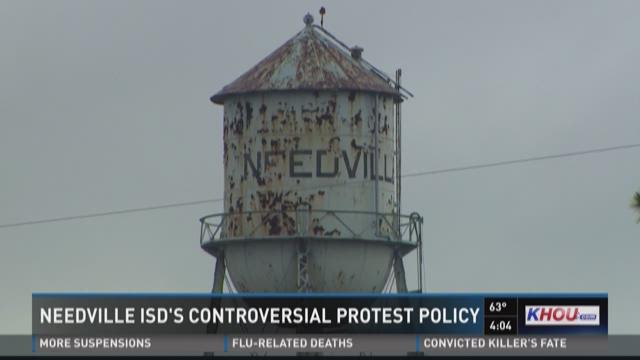 Students in Needville ISD who join demonstrations following the Parkland school shooting will be suspended, according to the superintendent.

In a statement posted on Facebook, Superintendent Curtis Rhodes said the students will be suspended for three days:

"The Needville ISD is very sensitive to violence in schools including the recent incident in Florida. Anytime an individual deliberately chooses to harm others, we are sensitive and compassionate to those impacted. There is a "movement" attempting to stage walkouts/disruptions of the school through social media and/or other media outlets.

Please be advised that the Needville ISD will not allow a student demonstration during school hours for any type of protest or awareness!! Should students choose to do so, they will be suspended from school for 3 days and face all the consequences that come along with an out of school suspension. Life is all about choices and every choice has a consequence whether it be positive or negative. We will discipline no matter if it is one, fifty, or five hundred students involved. All will be suspended for 3 days and parent notes will not alleviate the discipline.

A school is a place to learn and grow educationally, emotionally and morally. A disruption of the school will not be tolerated.

Respect yourself, your fellow students and the Needville Independent School District and please understand that we are here for an education and not a political protest."

The threat was met with mixed reaction in Needville.

Extra police officers were on standby at Needville High School where students had reportedly planned to walk out at noon to advocate for gun control.

That was a relief for Marla Giese, whose daughter is a junior.

"I just think if you're gonna protest, not during school because we're learning, you're here for an education," Giese said.

"How shameful and disappointing, threatening your students who want to stand with students all over the country on an issue they care about," wrote one Facebook commenter.

"I believe they do have the right to voice their opinion," wrote another.

Eladio Herrera has four grandchildren. He wants lawmakers to listen to young people about issues surrounding school safety. But not during classroom time.

"They're very smart people at their age, and I think they can present their views in a way that people will stop and listen," Herrera said. "But walking out is not the answer."

Organizers of the Women's March on Washington are calling on students, teachers and parents to take part in a national school walkout for 17 minutes on March 14 -- one month after the Florida shooting.

Needville and most area school districts are on Spring Break the week of the 14th.

Survivors of the Parkland shooting are planning a March for Our Lives campaign in Washington on March 24, a Saturday.