More than 100 people, both parents and students, came dressed in white and crowded into the board meeting as a last-ditch effort to try and save the Two Way Immersion Program, or TWI for short. 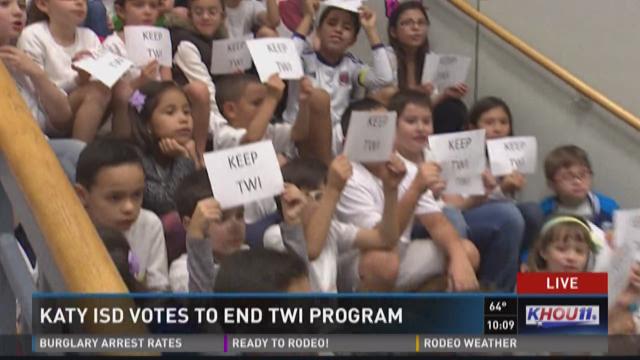 KATY, Texas - The Katy ISD Board unanimously voted to phase out a popular dual language immersion program in the district at a board meeting Monday.

More than 100 people, both parents and students, came dressed in white and crowded into the board meeting as a last-ditch effort to try and save the Two Way Immersion Program, or TWI for short. It's a popular program offered at two elementary schools in Katy ISD where kindergarten thru fifth-grade students learn in English and Spanish.

It helps students become bilingual at a very young age. Parents say it's a beneficial program that makes a huge difference in student development and performance.

Nonetheless the School Board voted unanimously to phase out the program. The District says it costs over $1 million each year, and it came down to resources.

"It is disheartening to know there's a $70 million football stadium that is used 1 percent of the time," said Courtney Johnson, a parent in the district."Priorities are difficult for all of us and I think the school board has difficult decisions to make. I think they're doing their best. But I don't think they realize the strength of the community that wants Spanish immersion. They think it's a niche group, and the reason we're here tonight is to show them that's not the case. There's lots and lots of us that want this for our children."

A district spokeswoman says the decision wasn't an easy one.

"We want our parents to know their voices were heard," said Maria Corrales Dipetta, a KISD spokeswoman. "It was a difficult decision. We know they will be impacted. We know they value this program. Unfortunately the decision came down to phasing it out."

After the meeting adjourned, things did get a bit more heated. Parents and students both confronted the superintendent and expressed their frustration with the decision.

The program will ultimately be phased out. That means if students are currently enrolled in the program, they will be able to finish it through the fifth grade. But after that, no one else will be admitted to the program and it will be over.