Other districts say they're seating students with as much space as feasible. 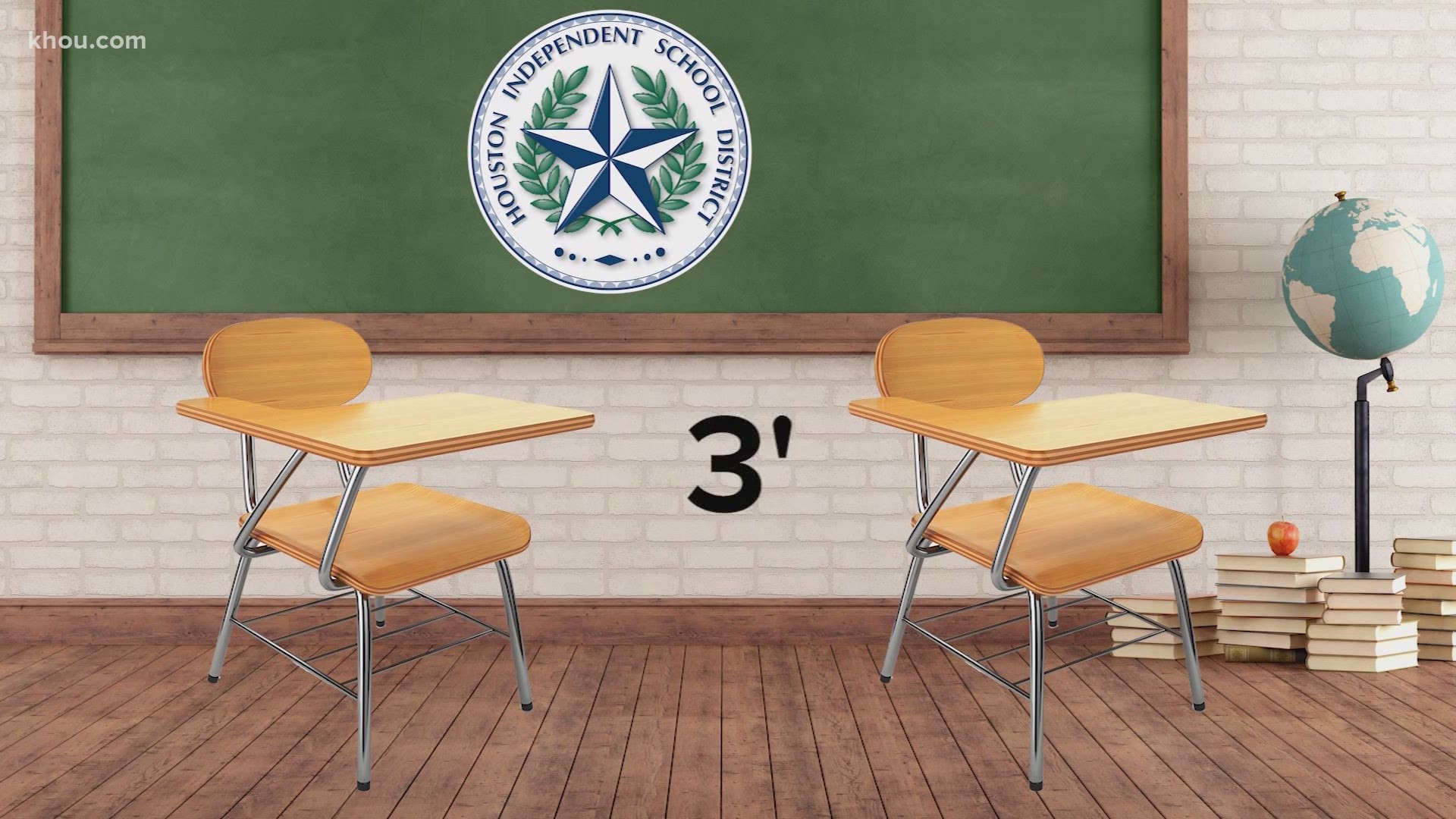 HOUSTON — HSPVA junior Matthew Garza doesn’t necessarily sing the praises of online learning, although the performing arts student said he’s tried to make the most of it.

"Our grades are for singing and performing," Garza said. "Performing in front of people with an audience.”

He’s more likely to be on stage than at a desk. But he plans to get in tune with whatever rules are in place once he’s back on campus.

“I’ve had a lot of people that I know tell me that they’re going back because they really want to go and see their friends and stuff,” Garza said.

Among the rules Houston ISD is still working out deals with the distance between desks. The plan currently requires 6 feet of space, but the district is considering as little as 3 feet in accordance with updated public health and educational guidelines.

“This reduced space would only be implemented as needed, with the goal continuing to be to place as much space as possible between desks,” HISD said in a statement.

Desk distance. @HoustonISD may drop it from 6’ to 3’ in SOME cases to better accommodate students when they return to campuses next month. Some parents say it could be factor in sending their kids back. More on that + a closer look at the guidelines: @KHOU at 4:00 #khou11 pic.twitter.com/6gPwgaWEv5

“I think that would have a huge impact on sending people in-person or not," said HISD parent Carly Walker. "Because a lot of people are thinking of that 10 to 12 student ratio in a class, certainly not 20.”

Walker’s kindergartner and 3rd grader will continue to learn remotely for at least another six weeks.

That's something HISD families have until Friday to decide, or else they default to in-person instruction.

"There are a lot of unanswered questions," Walker said. "I mean, the school is doing the best they can to answer them, but I feel like there’s kind of this missing link in communication.”

The distance between desks is something she said she never knew about. But it's just one more thing to which Garza plans to adjust.

We checked with other districts for their rules regarding desks. Katy ISD said its policy is to seat students with as much space as feasible.

Meanwhile, the Houston Federation of Teachers suggested moving students from busy schools to less crowded buildings, if necessary. It added that desk distance in another example of COVID protocols not being properly nailed down.

"The HISD Communicable Disease Plan is based on guidance from Centers for Disease Control and Prevention as well as public health and state education officials. As noted in the executive summary, it is a dynamic document that will be updated regularly as public health conditions and guidance changes and new processes are implemented.

"The plan currently requires 6 feet of space between desks. As we prepare for the return of students to classrooms, the district is considering 3 to 6 feet spacing — in accordance with updated public health and educational guidelines — to accommodate students while also ensuring their safety. This reduced space would only be implemented as needed, with the goal continuing to be to place as much space as possible between desks."