COVID-19 scrapped his commencement, so this father hilariously strolled around Costco in his cap and gown instead

Clay Westmoreland started college 25 years ago and never finished. He went back to school in 2018 and has finally earned his degree. 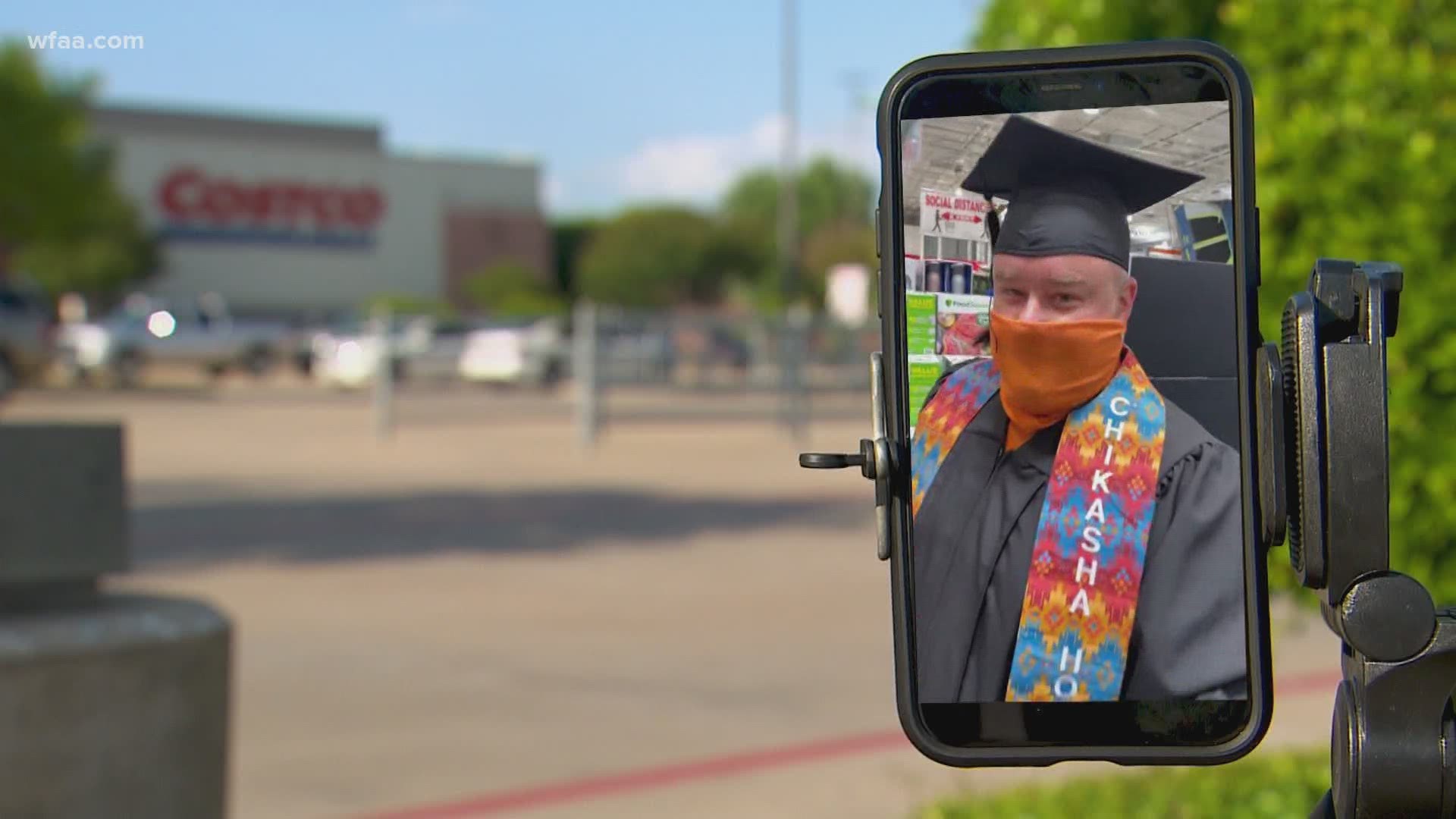 LANCASTER, Texas — We've all made those choices.

You know them, when the sole basis of our decision making is, "Hey, I deserve this."

I know I have. I often repeat that phrase to myself anytime I order pizza.

Clay Westmoreland, a 43-year-old father of two from Lancaster, found himself saying that phrase last Saturday.

His reasoning, however, wasn't as selfish as mine. In fact, it's both awesome and hilarious.

"I spent three years as a pre-med major and it didn't work out," Westmoreland said.

Westmoreland's next move in life was to follow in his dad's footsteps, which involved being a cop.

He was a correctional officer in Bedford from 2000 to 2002. He then joined the Duncanville Police Department.

But after 11 years with the department, an injury pushed Westmoreland off the force.

He told WFAA that a car wreck left him with a back injury.

"I had to hang it up and find something else to do," Westmoreland said.

So, Westmoreland went back to school. In 2018, he started online classes with LeTourneau University focusing on health administration.

"When I found the university, I was registered for classes by the end of the day," Westmoreland said.

Fast forward to 2020. Westmoreland has a bachelor's degree along with a cap and gown ready to graduate.

"It was a huge sense of accomplishment and pride," Westmoreland said. "Just proud of myself for pulling it off."

But, Westmoreland's commencement ceremony was scrapped because of COVID-19.

He's not the only college senior who was robbed of the special moment.

Colleges across the state and the U.S. had to turn to virtual ceremonies in place of in-person events.

"It was a lot of mixed emotions," Westmoreland said.

Westmoreland's ceremony was supposed to be last Saturday.

So when his wife needed to run an errand to Costco for groceries, Westmoreland decided to get the most out of what was supposed to be his big day.

He got in the car, but not before throwing on his cap and gown.

"We were getting ready to go to Costco and I said you know what, I'm going to put this on and wear it around the store," Westmoreland said. "I worked hard for this, I waited a quarter of a century for it, and I felt like I deserved it."

Westmoreland's wife filmed him walking around aisles of the store wearing his graduation garb. The song 'Pomp and Circumstance' was even played on a phone as Westmoreland shopped.

"I got some strange looks and a lot of congratulations," Westmoreland said.

"An employee who was checking receipts announced I was a graduate and I got an ovation from everyone who worked there."

But more importantly, he's not letting a pandemic cheapen his dreams or achievements.

And he thinks you shouldn't either.

"If you've worked for something, if you're being led to something...don't let anything or anyone tell you that you can't do it," Westmoreland said.