Alvin ISD is plans to get community input on its dress code after a petition surfaced seeking to change a ban on boys wearing makeup. It happened after a Shadow Creek High student was suspended for doing so. 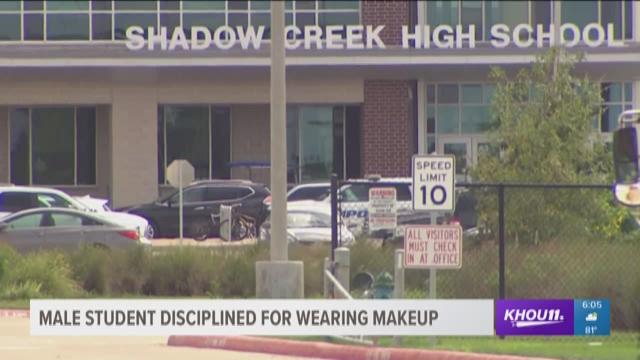 PEARLAND, Texas — Alvin ISD is looking at changing its dress code to accommodate boys who want to wear make-up. The decision comes after a suspension at Shadow Creek High in Pearland led to an on-line petition.

But she believes a good male friend who routinely wears makeup should be able to do so, including at school.

“He has the same rights as any girl to wear makeup if he wants,” said Richards.

Right now, under current Alvin ISD dress code rules, he doesn’t. It specifically states that “boys may not wear makeup.” That’s something Richards said her friend wasn’t necessarily aware of when he recently got sent to in-school-suspension.

“He was asked whether he would like to remove the makeup or go to ISS and he said he refused to take off the makeup,” said Richards.

As a result, Richards drafted a Change.org petition to try and get the dress code changed. It got close to its 1,500-signature goal within just four days. It also got the attention of Alvin ISD leaders.

Combs personally met with Richards and her friend about boys wearing makeup and plans to get input from parents, students, and others before recommending possible district-wide changes. And there are already mixed opinions.

“I don’t know. If it was my kid, I wouldn’t want him wearing makeup to school,” said Luke Perry.

“We’re in an environment these days that we should embrace everyone,” said Kim Becker.

Combs said changes will, at least, be looked at.

Petition seeks to change Alvin ISD’s dress code after it claims a boy got suspended for wearing make-up to school. District says it’s already reassessing rules with help of students involved + community. I’ll have more on #khou11 at 4:00 & 6:00 https://t.co/jfv2iyGzHp

“You know, some of these elements have been in our dress code for many, many years,” said Combs. “And, as we go through that review, we certainly want to address concerns that come forward.”

For now, Richards’s friend plans to leave the makeup off until the issue is settled.

“I’m very glad the district is willing to look at this,” said Richards. “People were shocked it was in the dress code in the first place.”